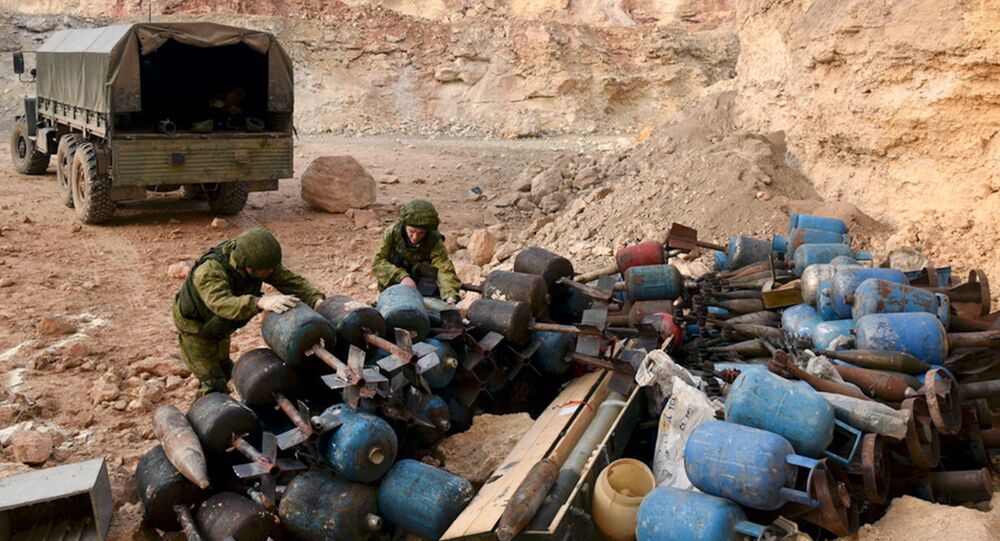 Russian Defense Ministry said that more than 150 Russian engineers and 17 pieces of equipment have been deployed to Syria for mine clearance operations in Palmyra.

© AP Photo / Hassan Ammar
Russian Reconciliation Center Helps Deliver Over 20 Tonnes of UN Aid to Syria
MOSCOW (Sputnik) – More than 150 Russian engineers and 17 pieces of equipment have been deployed to Syria for mine clearance operations in Palmyra, the Russian Defense Ministry said Thursday.

"The personnel, military equipment and property of the International Mine Action Center of the Russian Armed Forces were promptly deployed by military transport aviation aircraft from Chkalovsky airfield (Moscow Region) to Hmeimim air base (Syria)," the ministry said.

The units then performed a mounted march and embarked on the demining process focusing on roads leading to social infrastructure and heritage sites, the ministry said.

Apart from the sapper units, the detachment included a unit with mine detection dogs.

Prospective means of searching for, and detecting, explosive substances, as well as means of protecting deminers are to be tested.

The International Mine Action Center of the Russia Armed Forces is equipped with modern demining and protection kits, including selective portable inductive mine detectors IMP-2S, portable detectors of wire circuits of control of explosive devices (PIPL), the INVU-3M portable detectors of non-contact explosive devices and the OVR-2 multi-service sets of mine clearing, as well as with survival kits, composed of self-contained power supplies, field kitchens, and tents for servicemen.

Militants from Islamic State, a terrorist organization, banned in many countries including Russia, took hold of Palmyra, one of the most important centers of ancient civilization in the world. in May 2015, and held the city until March 2016, when the Syrian army supported by Russia's Aerospace Forces liberated it. However, the jihadists later succeeded in driving out the Syrian government forces in December 2016 after a large-scale offensive.

US, Russia Forces in Eye Contact in Syria’s Manbij - Coalition