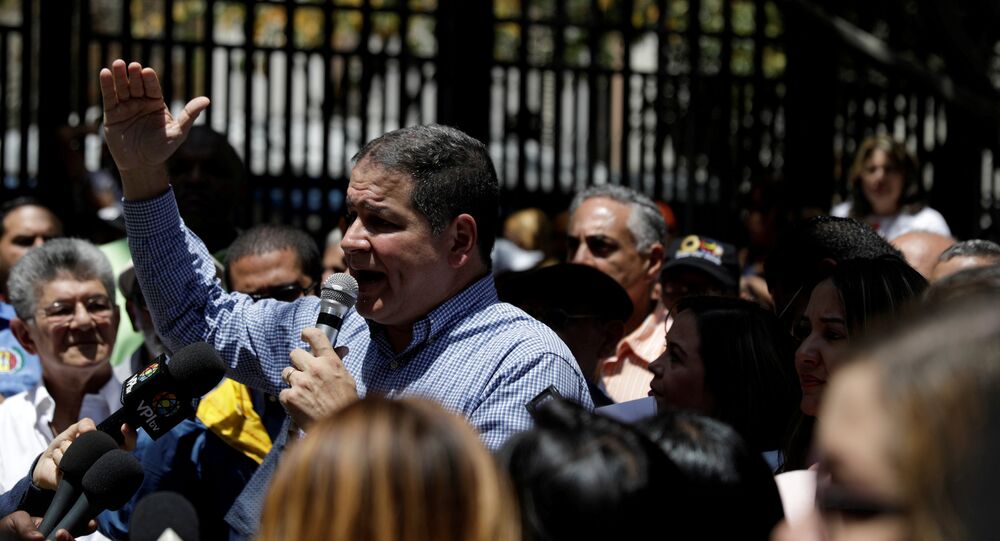 A deputy to self-proclaimed interim president Juan Guaido, earlier prosecuted for his role in the failed coup on 30 April, has fled to Colombia. This comes after one of Guaido's deputies Edgar Zambrano was jailed for treason, conspiracy, civil rebellion, while another - Americo de Grazia, reportedly took refuge in the Italian embassy in Caracas.

Luis Florido announced he has fled Venezuela for neighbouring Colombia, in a video posted on Twitter Friday.

"I am out of the country in Colombia, safe from a regime ready to imprison deputies," said Juan Guaido's deputy in the video.

Earlier in the day Venezuela's Supreme Court has decreed to put the deputy speaker of the National Assembly, Edgar Zambrano, in pretrial detention at a military jail in the capital Caracas.

Edgar Zambrano was earlier apprehended by intelligence agents for his support of the failed uprising orchestrated by the country's self-proclaimed president, Guaido.

The prosecution charges them with high treason, public conspiring for violating law, inciting civil uprising, and power usurpation, among other crimes.

Over the past years, Colombia and Venezuela have recalled their ambassadors multiple times amid tense relations between the two neighbouring countries. Tensions escalated further after the assassination attempt on Maduro in August 2018. Caracas accused Bogota, particularly then-Colombian president Juan Manuel Santos, of having a role in the attack. The Colombian Foreign Ministry denied any involvement of Bogota in the assassination attempt on Maduro.

© AP Photo / Fernando Vergara
US, Colombia Use Venezuela to Divert Attention From Drug Trafficking - Caracas
Back in February, Bogota decided to partially shut the country's northeastern border with Venezuela after efforts by the Venezuelan opposition allowing trucks with unauthorized humanitarian aid into the country, led to clashes between Venezuelan security officers and pro-aid protesters.

Following the attempts to illegally bring humanitarian aid into Venezuela from Colombia, Maduro announced that Caracas was cutting off diplomatic and political relations with Bogota.

© REUTERS / POOL
Pompeo Demands 'Justice' For Guaido's Detained Deputy on Behalf of Venezuelans
The US, Canada, some Latin American and European nations were quick to recognize Guaido as the new legitimate leader of Venezuela and have supported him in his attempts to oust Maduro from power.