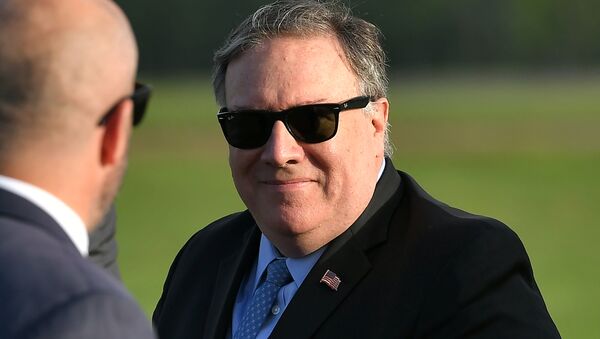 Earlier, Diosdado Cabello, the head of Venezuelan government-led National Constituent Assembly confirmed reports that Edgar Zambrano, the deputy speaker of the Venezuelan opposition-controlled National Assembly, has been detained in the wake of the failed coup in the country, which took place on 30 April.

Pompeo, while dubbing Maduro's government a "tyrannical regime," claimed that the "Venezuelan people demand justice" with respect to the detained Zambrano. The latter, Pompeo said, "deserves to be free."

The detention of @EdgarZambranoAD is yet another desperate act of a tyrannical regime. The Venezuelan people demand justice. #Venezuela, like all of Maduro’s political prisoners, deserves to be free. #EstamosUnidosVE https://t.co/0HilWYnCRo

At the same time a press statement by Pompeo, released on US Department of State website calls the detention of Zambrano, who was, along with other opposition lawmakers stripped of his immunity and charged with high treason, public conspiracy to violate the law, inciting civil uprising, usurpation of power and other crimes characterized as "unacceptable and illegal acts."

When referring to Nicolas Maduro's regime, Pompeo, according to the statement, calls it "former," while accusing the latter of "continued attempts to crush dissent and free debate in Venezuela."

Earlier in the day, one of those opposition lawmakers who was suspected in taking part in the coup attempt, Americo de Grazia entered the Italian embassy in Caracas.

"I thank Italy for the welcome," De Grazia wrote on Twitter, though he did not say he had taken refuge in the embassy, Reuters report says.

US-Backed Guaido Claims 'Military Intervention' is Still on Table for Venezuela
Earlier Guaido admitted that he is considering the possibility of foreign intervention in his country in order to achieve his goal of ousting democratically elected President Nicolas Maduro.

When asked by CBS about the possibility of a US military intervention in Venezuela, opposition leader Juan Guaido confirmed that he is still considering it an "option", claiming that he is trying to find the "best exit out of [the] conflict".

Meanwhile, Nicola Maduro announced the initiative on public dialogue on economic development of the crisis-torn country.

"I have initiated a process of dialogue with the public in an effort to create a plan of action, reconstruction and change in the Bolivarian Revolution. I need a plan… for changing the economic and political life of the country completely. The first events happened on Saturday and Sunday and they were very interesting. Now, I want such public meetings to be held at the end of this week, and thousands of public meetings to be held in order to hear the people, their criticism and suggestions […] People know everything", Maduro said.

Maduro has accused the United States of trying to orchestrate a coup in order to install Jaun Guaido as a US puppet.

Pompeo Claims Any US Action in Venezuela, Including Military, to Be 'Lawful'
The US, Canada, some Latin American and European nations were quick to recognize Guaido as the new legitimate leader of Venezuela and have supported him in his attempts to oust Maduro from power.