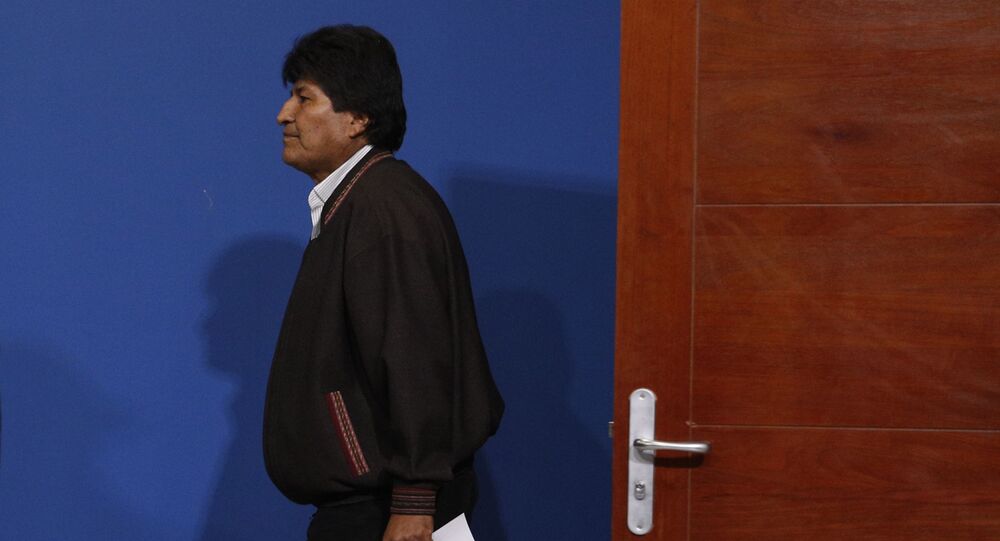 Bolivian President Evo Morales resigned the presidency after the country's armed forces sided with demonstrators who had were opposing his serving a fourth term.

Sputnik: Bolivian President Evo Morales has resigned. But as we've seen, protests have continued despite the resignation and the announcement of new presidential elections. In your view, how will the situation develop in the next few days? Who might replace Evo Morales?

Guadalupe Correa-Cabrera: That's a good question. Definitely, I see more violence taking place. More protests, maybe more people wounded and some of them assassinated. This happens in a context like the one that we have seen in Bolivia when they - Evo Morales was forced to resign. He didn't resign just because he wanted to resign. He was calling for elections under his presidency.

And when the army, with the military and the police, express their lack of support, they didn't support the president anymore. He was forced to resign. And we know that Evo Morales had a lot of support from an important segment of the population, not from everybody, but an important segment. And that would lead to further violence, further instability. And with regards to the person who would…

This is a temporary situation, right? It's difficult to say who's right now going to replace him. It seems that there was a concerted effort to make him resign. Therefore, the two leaders of the opposition - they would run for elections, of course.

But at this point, it's difficult to know what the negotiation is going to be. But definitely it's going to be a person from the opposition. But the problem is that - it's a good question - because if the protests go beyond or they elevate their tone and we see more people dead and all that - even a member of the armed forces can possibly…

I'm not sure I'm speculating. It's difficult to say. It's a difficult question to ask, of course, because it also depends on the levels of violence and instability in the country. I don't foresee a stable situation in the near future. On the contrary, I foresee a lot of violence and maybe people killed.

Sputnik: We’ve seen a backlash from the Latin American countries regarding the current situation in Bolivia. What dangers does the situation itself pose to representative democratic rule in the country?

Guadalupe Correa-Cabrera: This sets up a terrible precedent because this is a coup d’état - and definitely that would set up a terrible precedent for other countries. We know about the protest, the level of instability in different nations of the continent that would put other presidents under big stress. I don't think about those who are lean to the left - in this case exactly because it seems that that the right-wing in certain countries is well organised and can mobilise a lot of support. And I'm thinking of countries like Mexico, let's say.

Mexican president… And this is what people in Mexico are saying that they fear - if you could try to capture the opinion, not only the social media, but public opinion in Mexico, before Morales announced his resignation - people in Mexico, some of them, of course, a segment of the population that was very outspoken - express their solidarity with President Morales - because of saying if he resigns and there is a coup d'etat in Bolivia, there can be a coup d'etat in Mexico.

The Mexican president does not go with the mainstream and the right-wing. And that happened in Bolivia - it gives a sign that that is possible in any country of Latin America. And when the military doesn't support the president, they can choose who they want, who they don't want. And that's something that reminds us to what has happened in the region several times, particularly in the 20th century.

Sputnik: The latest wave of turmoil in Latin America saw its birth pangs in the Venezuela crisis and has since spread to Bolivia, Ecuador and Chile. What are the possible reasons behind the unrest in these countries? Why has it been so widespread? Is premature to say that this could be a Latin American ‘Arab Spring’?

Guadalupe Correa-Cabrera: We have seen mobilisations in different countries and we don't know if they come from the so-called right or the so-called left. What we have seen - a lot of instability in different countries of the region. And I'm thinking about Chile, I'm thinking about Peru - the instability in Peru and Chile in particular - also there's a protest in Colombia, also this has started in Bolivia. This can happen in other countries.

The unrest, it comes from the two sides of the political spectrum. It's not necessarily a movement against the right or the left. It's a movement against an elected official, elected heads of state. And this might be the beginning. We don't know. Let's see what really happens and how much support the heads of state, the presidents of countries - how they can gather support from their own armed forces.