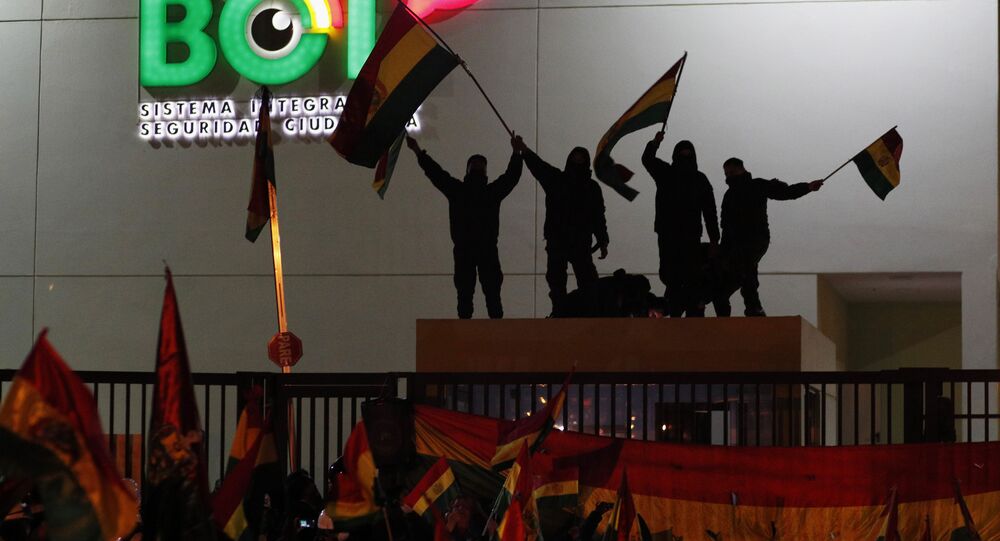 Bolivian police officers guarding the presidential palace have reportedly joined the protests raging across the country, prompting President Evo Morales to convene an emergency meeting amid rapidly escalating unrest. The nation's army is said to be explicitly prevented by law from intervening.

Despite earlier reports of no mutiny in police ranks, guards outside Bolivia's presidential palace on Saturday joined other officers in other cities who have abandoned their posts, increasing pressure on President Evo Morales to resign, AP reported.

According to the media report, the list of demands from dissident police officers includes better working conditions, the resignation of their commander and guarantees that they will not be used as the political "instrument of any government".

Earlier, Bolivian authorities called on dissenting police forces to engage in dialogue, while offering concessions including a pay raise.

"The Bolivian government, in light of the events that took place on November 8-9, are calling on the police forces to engage in an immediate and open dialogue with the aim to make equal pay and a 100 percent pension increase a reality", the government tweeted, asking for a peaceful solution to the crisis.

Gen. Williams Kaliman, the military chief, said Saturday, cited by AP, that the military will not intervene. "We'll never confront the people among whom we live. We guarantee peaceful co-existence [...] This is a political problem and it should be resolved within that realm", Kaliman said.

Unrest in Bolivia erupted in the wake of the 20 October presidential election. Electoral authorities said that Morales had secured a new term in the first round, while rival Carlos Mesa refused to recognize the results of the vote, claiming widespread voter fraud.

The opposition reported irregularities in the vote-counting process, while Morales accused Mesa and his party of trying to overthrow him.