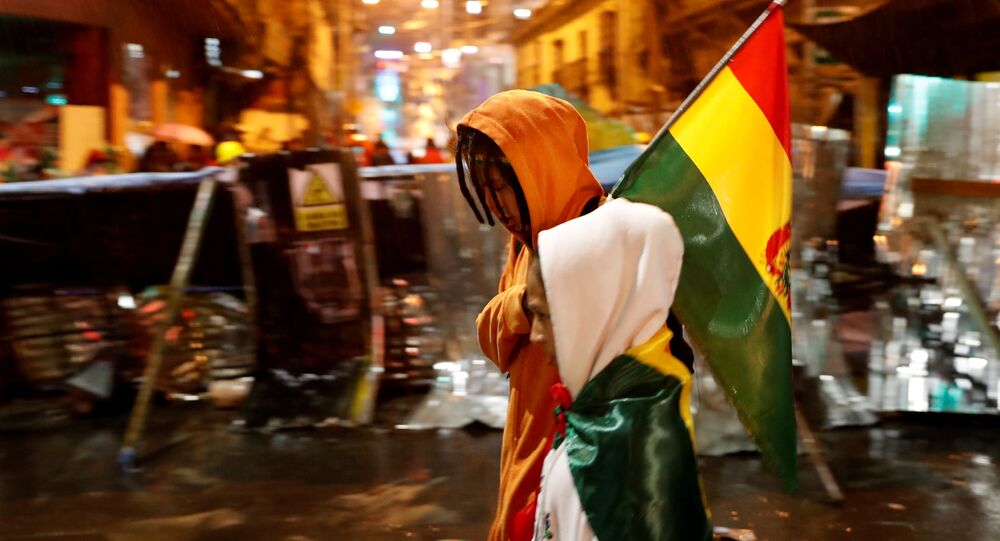 What Could Be Behind the 'Coup' in Bolivia?

Bolivian president Evo Morales has resigned from his post amid ongoing anti-government protests. Sociologist Verónica Navia has offered her views on what could be behind the military-backed "coup d’état" against the nation's socialist leader.

For Verónica Navia, external forces could be responsible for the resignation of the Bolivian president Evo Morales and acts of violence in Bolivia.

“A coup has taken place in Bolivia, what else can I say. There might be some external forces behind it, which had their own performers in Bolivia, such as opposition leader Luis Fernando Camacho. It was he who was the link, while Carlos Diego de Mesa Gisbert and other candidates who took part in the elections were puppets,” the sociologist suggests.

Sputnik: What are the reasons for the current political crisis?

Verónica Navia: The only motive that prompted these people to rebel was their desire to regain power and the fact that they didn’t like Morales. There are no other reasons. For many years, the President has faced with pressure from the government.

Sputnik: What is Morales’s future in politics?

Verónica Navia: Morales has struggled a lot, but at the same time he had many supporters (…).He was the best president and his government was the best for Bolivia. The country has managed to solve the problem of poverty which we were facing. I don’t think that after his resignation Morales will abandon his lifestyle: the struggle for the people.

Sputnik: In this regard, can we say that Morales has great public support?

Verónica Navia: Morales has secured not only national support, but also international support from the progressive governments of neighbouring countries, which gives us hope.

Sputnik: Which politicians will have the greatest popular support in the upcoming elections?

Verónica Navia: At the moment, we don’t know who the candidates are. A new election process will be conducted. In accordance with Bolivian standards, primaries in each political organisation will first be held.

Sputnik: What do you think about checking the results of the past elections, organised by the Organisation of American States (OAS)? What decision will be made?

Verónica Navia: The preliminary report, which has already been announced, is rather concise. Moreover, this document in some cases doesn’t speak of electoral fraud, but points to the so-called manipulation of information. This is what unleashed violence in the country. Regardless of whether or not the final report is published, we call for the OAS to monitor the implementation of democracy in our country. We believe that the implementation of legislative norms in each country is the priority.

Sputnik: Will there be an international election check? How will it be run? As far as we understand, Bolivia is in complete chaos at the moment.

Verónica Navia: This is not only chaos. This is a discredit of all Bolivian statehood. Therefore, I don’t think this is about a manifestation of readiness, but rather the need for trusted international representatives to be present [at the elections]. This is necessary so that they can control the electoral process and restore confidence in Bolivia’s state system.

Sputnik: Did the coup organisers want to have the international check, or did they want to run their own inspection without resorting to international assistance?

Verónica Navia: The organisers’ goal was to isolate Morales from power.

Sputnik: What measures should the future President take – no matter who the new President is – so that a similar situation doesn’t happen again?

Verónica Navia: At the moment, it’s necessary to hold new elections. This is the only job that the acting president must do. We hope that in the future the new president won’t change or abolish the social policy pursued by the Morales Government. However, currently Bolivia is actually left without a government.

Sputnik: There was a lot of media speculation that Morales wanted to flee the country and seek asylum abroad. Do you think he will try to leave, or he will stay? What would be better for him?

Verónica Navia: I can only express my personal opinion here. Morales is the leader of half the Bolivian people; these people trusted him, they voted for him. He always promised he wouldn’t follow the example of Gonzalo Sanchez de Lozada, who fled the country. Therefore, people trusted him; and this is 50% of the country’s population. He has kept his promise when he said that he wouldn’t use the army to resolve the political crisis (…). He promised never to run away from a situation like this, and he has kept this promise. Moreover, his resignation is an attempt to calm the country, since if he didn’t do this, any government that would come to power wouldn’t be legitimate. In the name of peace and love for Bolivia, he was forced to resign.