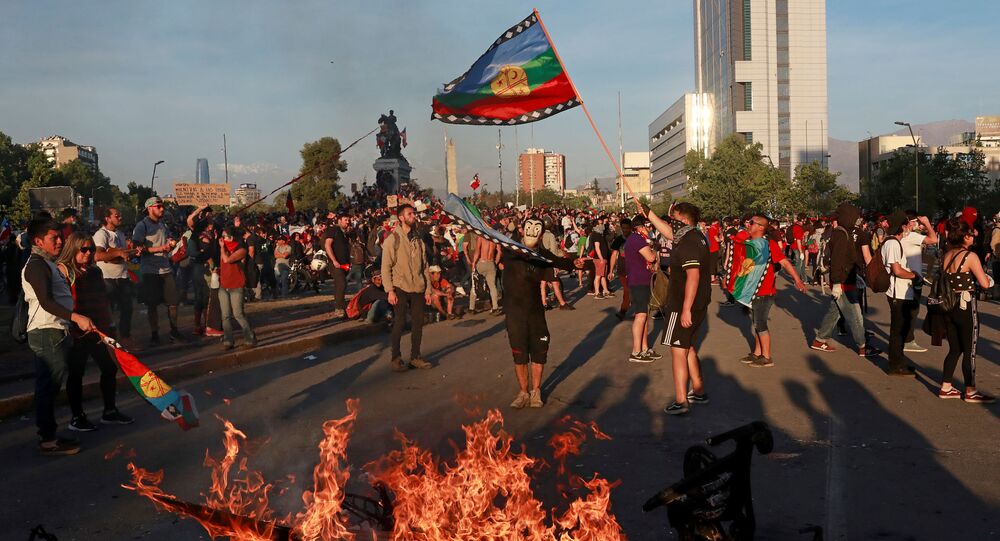 While the protests breaking out in Ecuador, Chile, and Bolivia have different causes, all of them are to some extent caused by Washington's longstanding strategy of holding the reins of its "backyard", explains Brazilian professor Gustavo Guerreiro.

Latin America has recently been disturbed by three waves of anti-government protests: first, unrest broke out in Ecuador on 3 October and then disturbances erupted in Chile and Bolivia on 14 and 21 October, respectively.

The Ecuadorian protests raged on until mid-October, and were triggered by the government's decision to abolish the country’s 40-year-old fuel subsidy under austerity measures agreed upon by Ecuadorian President Lenín Moreno and the IMF.

The trigger point for the upheaval in Chile was an increase in the fare for the Santiago subway, which was seemingly the last straw amid the country's longstanding economic difficulties.

As for Bolivia, the turmoil kicked off as a response to claims of electoral fraud in the 20 October 2019 general vote won by incumbent Bolivian President Evo Morales.

While President of Ecuador Lenín Moreno has somehow found a way to calm the protests, the governments of Chile and Bolivia are still struggling to find a compromise with demonstrators.

Gustavo Guerreiro, editor of World Tensions Magazine at Ceará State University (UECE), in Brazil,and a member of the Brazilian Centre for Solidarity with Peoples and Fight for Peace (CEBRAPAZ) has explained what is behind the turmoil engulfing the three South American states and how these events differ from one another.

Sputnik: Who is behind the recent clashes in Chile and Bolivia? What are the major causes and driving forces?

Gustavo Guerreiro: In the cases of Chile and Bolivia, these are different situations that reveal a crisis of a same nature. Chile was hit by a neo-liberal dismantling that has its roots in the 1970s, in the military dictatorship. It has an economic policy that has deepened the process of dismantling the state and the population's living conditions, who are now taking to the streets for dignity. A country that has a retirement system that is privatised and bankrupt. Where 50% of pensions are below the minimum wage and 44% are below the poverty line.

In Bolivia, Evo [Morales] won the elections with 200 international observers. The country has a totally opposite policy of Chile with the strong role of the state in the figure of Evo. It recorded the largest economic growth in South America, which, according to the IMF, signalled an advance of 4% of the country's GDP. It has a policy of nationalisation of hydrocarbons and natural resources.

The nature of the conflict in Chile is due to the spasm of society against neo-liberal policies and in Bolivia it is a conservative reaction of the amalgamated elites with US imperialism. They have the same root, which is the advance of the imperialist policy in the region.

© REUTERS / UESLEI MARCELINO
Bolivia's President and presidential candidate Evo Morales of the Movement Toward Socialism (MAS) party is greeted by supporters as he arrives to vote during the presidential election at a polling station in a school in Villa 14 de Septiembre, in the Chapare region, Bolivia, October 20, 2019.

Sputnik: Are the recent clashes in Chile and Bolivia somehow connected with the turmoil in Ecuador? Could these three separate protest movements be described in terms of a left-right political struggle in Latin America?

Gustavo Guerreiro: The conflicts in Chile and Bolivia are related to the turbulence in Ecuador since they are movements of "action-reaction" to this imperialist policy imposed by the US, especially in Latin America. The protests are of a different nature, especially in the case of Chile and Ecuador. They have a popular face against the loss of social rights, the dismantling of social policies, the dismantling of the state; it comes from a population that is not always organised. In the case of Bolivia, it is an action by reactionary sectors of the society, which see in the advancement of the Evo Morales government's nationalist policies a loss of privileges and certain elites that are in line with the project of neo-liberal domination imposed by the US government.

Sputnik: Who is interested in ousting Morales and how could it affect the situation in Venezuela?

Gustavo Guerreiro: In the case of the election in Bolivia it is interesting to note that the modus operandi adopted in the election was similar what happened in Brazil in 2014. Even before  starting the election process, the candidate who lost (Aécio Neves) announced that he did not believe in the electronic electoral system. In Bolivia, the same thing happened. As the conservative camp in Bolivia cannot win in the democratic camp, they try to defraud the electoral camp.

Those who are interested in kicking Evo [Morales] out are the elites aligned with this Washington DC imperialist power project. The situation can be impacted because the reality of these countries cannot be considered as immune to the regional strategic game. Any movement in Argentina, in Ecuador, Peru and especially in Brazil has serious consequences for Venezuela. So the realities are all interconnected. It is a complex geopolitical reality.

Photos: People in Mexico Take to Streets to Support Protests in Chile