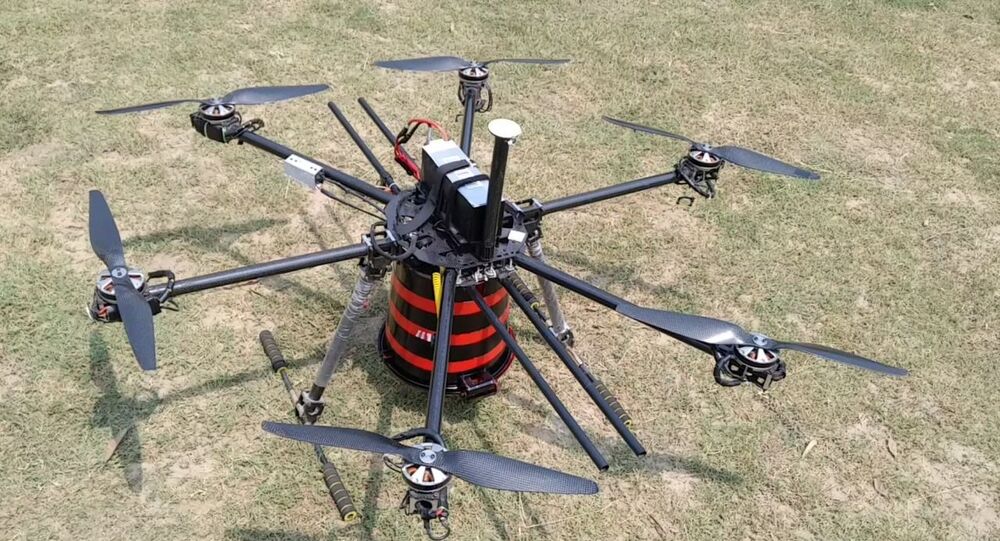 On 27 June, two drones dropped improvised explosive devices (IED) with RDX on Pathankot, the Indian Air Force base in Jammu. The explosives were meant to target the Air Traffic Control (ATC) tower and a few MI 17 Helicopters parked in the IAF station but the targets were missed either because of faulty execution or wind factor.

The drone-powered attack on the IAF base and some stationary helicopters in Jammu's Pathankot, is the first of its kind and has left many Indians worried. It is being attributed to Pakistani terror organisation Lashkar-e-Taiba (LeT) which means "Army of the Good".

India's defence minister Rajnath Singh reacted to the high-tech terror strike by saying that the Indian army is perfectly “capable of replying forcefully to any challenge,” should the need emerge.

But How Drone-Ready Is India?

Talking to Sputnik, Lieutenant-Colonel (Ret'd) Naveen Navlani said that the Indian Army has a powerful and sophisticated set of plans for buying various drones that will come in handy to guard the forces in the foreseeable future.

“Presently, the single largest acquisition of ‘Mini unmanned aerial vehicles (UAVs)’ in the world to this date has been made by the Indian Army and this is likely to be finalised within this fiscal year. There is also a programme underway to upgrade the existing fleet of [medium-altitude long-endurance] UAVs with India's Armed Forces. On similar lines, India's Navy has looked into tendering to buy medium-range ship-based UAVs,” said Navlani, who now works as the general manager of Mumbai-based Indian drone company IdeaForge.

© AP Photo / Gurinder Osan
Major Global IT Firm Bets Big on Indian Drone Start-Up
India imports a lot of drones from the US and Israel. With a 22.5 percent of the world’s UAV imports between 1985 and 2014, India imported more drones than any other country, followed by the United Kingdom and France in 2015, according to a report published by foreign policy think-tank Gateway House under the Indian Council on Global Relations.

To reduce dependency on foreign players where national security is concerned, the Indian Army signed a deal worth more than $20 million with IdeaForge in January this year. Under the deal, IdeaForge has agreed to supply the Indian army with great-altitude drones for use by the country's infantry soldiers and Special Forces until at least January 2022.

According to former Army officer Navlani, however, India is now increasing efforts to upgrade its drones and capacity to keep the nation’s borders safe against more attacks like the one that damaged the IAF base in Pathankot over the weekend.

What Kind of Drones Should India Focus on Procuring or Developing?

For the past two decades, India has been using “medium-altitude long-endurance (MALE)” UAVs for “Intelligence, Surveillance, and Reconnaissance (ISR)" roles. The Indian security forces are also equipped with Heron Surveillance drones and the Harop loitering Munition drones, which are big enough to be used for combat missions.

In conversation with Sputnik, drone engineer Milind Raj emphasised that the nature of combat is evolving and there is alarm about tech-enabled terror attacks in the near future.

“India needs to develop micro-combat drones to tackle these recent issues that we all witnessed. With terror organisations getting more tech assistance, we must gear up to develop state-of-the-art drones to combat all kinds of attacks, be it warfare, or micro drone attacks. We must develop smart armed drones, with better sustainability and endurance, from micro to large sizes,” Raj said.

Pakistan has witnessed a series of drone strikes in recent years. In 2015, a reported US drone strike in Pakistan killed several militants. The incident accelerated the exploration of drone combat skills by Pakistani terror outfits, Raj explained.

In the early days of exploring this type of technology, China heavily relied on importing drones, but soon became the world’s largest maker of remote-controlled UAVs.

“So, what we see here is that two of India’s neighbours - China and Pakistan - are putting pressure on India to stay very alert about defending itself against drone combat. In October 2019, China's People’s Liberation Army (PLA) showcased their combat stealth drones, and in 2013 Pakistan showed off their combat drones too. India must be alert of the tech-seeds sown by our neighbours, we must work more on the drone ecosystem in India, strengthen the Digital Sky platform, and strengthen ‘No Permission, No Take-Off (NPNT)’ guidelines,” Raj told Sputnik.

NPNT is a software programme that enables every Remotely Piloted Aircraft (except Nano) to obtain a valid permission through the DigitalSky platform before operating in India.

India Can Become A Pioneer Of Anti-Drone Solutions

For now, however, there is no “silver bullet” in anti-drone solutions, Navlani revealed to Sputnik.

“There is also the need to perform a nuanced threat assessment of an asset and deploy these Anti Drone Systems and with time, better technology will develop. There is also a need to have a joint detection infrastructure for the Defence, Airports Authorities and other agencies to detect drones,” Navlani added.

India has the world’s second-largest armed forces with more than 1.4 million personnel. However, it also shares its borders with Nepal, Bhutan, Bangladesh, Sri Lanka, Pakistan and China.

In times of changing warfare which is going “borderless” with cyber attacks and drones, Indian leaders - including Prime Minister Narendra Modi and former Congress chief Rahul Gandhi - have advised India's armed forces to adapt advanced tech as soon as possible.