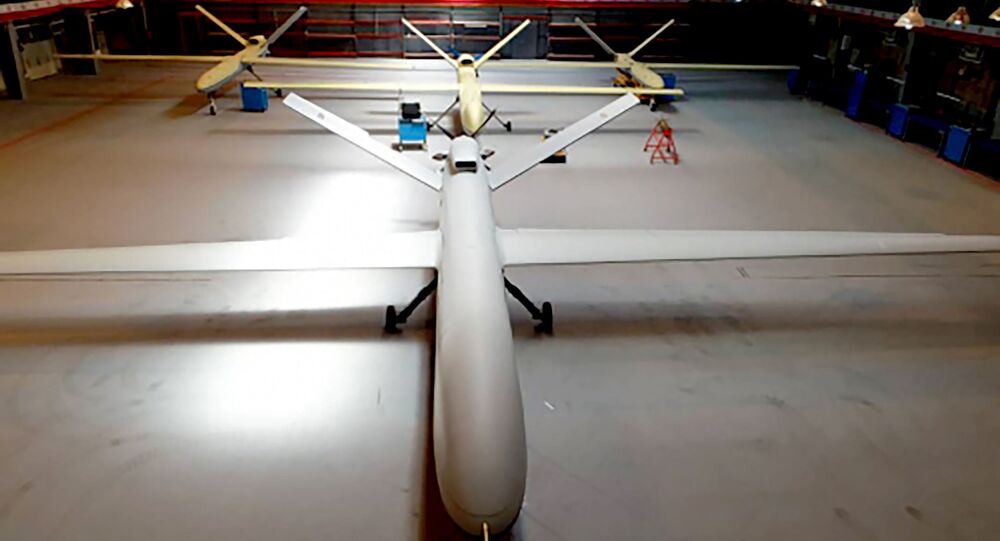 Iran Boasts Developing Drones Capable of Reaching Distant Parts of Europe, Most of Asia and Africa

The Islamic Republic has been actively developing its domestic defence industry in light of the international community cutting it off from weapons imports for years. Drones are one of the areas where the Iranian military has achieved significant results.

Iran has developed military drones capable of performing missions up to 7,000 kilometres away, Commander-in-chief of the Islamic Revolutionary Guards Corps Hossein Salami has stated in an interview with a local media outlet. He elaborated that 7,000 kilometres is the maximum radius of the unmanned aerial vehicle's (UAV) mission, which includes return to the base where it's stationed.

"We have unmanned aerial vehicles (drones) with [a] long-range of 7,000 kilometres. They can fly, return home, and make landing wherever they are planned to", Salami stated.

With such an operational range, the new Iranian drones will apparently be capable of reaching distant parts of Europe, most of Africa, Asia and Russia, and return after a successful mission.

Despite its impressive flight range, the new Iranian drone is far from reaching the heights of some of the biggest UAVs in the world. For instance, the Global Observer Stratospheric Persistent UAS, a project managed by US SOCOM, is capable of staying in the air for up to one week and flying over 725,000 kilometres.

And yet, Iran has been achieving new heights in recent years, domestically developing small arms, air defence systems, fighter jets, guided and ballistic missiles, warships, and drones. Tehran had intensified these efforts in light of a global ban on arms sales to Iran, which was only lifted last year. Drone-building is one of the areas where the Islamic Republic has had one of its biggest successes in the defence industry.

'Iran-Backed Militia' Carried Out Drone Attacks on US Targets in Iraq, Reports Say