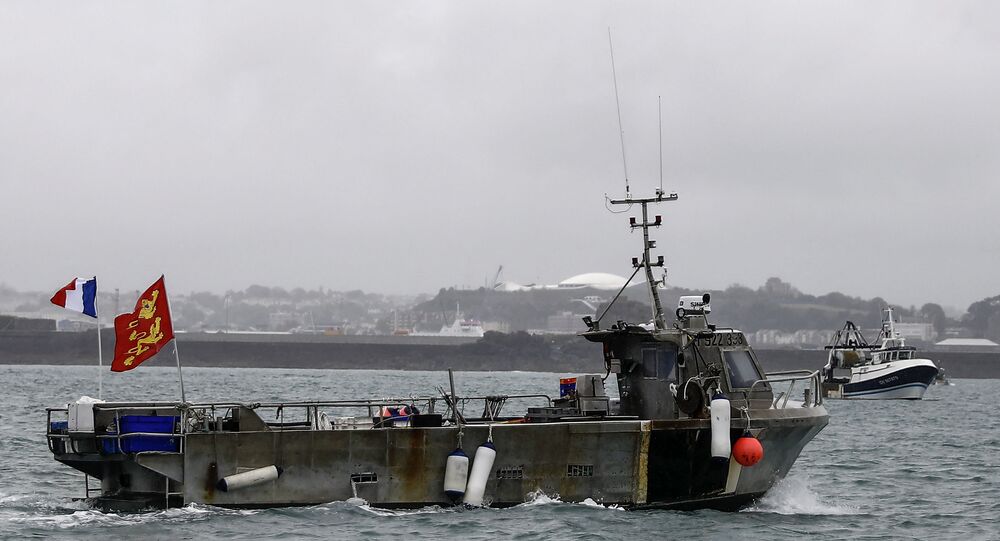 In an escalating maritime row, over 60 small Normandy vessels massed off the Channel Island of Jersey on Thursday after French fishermen complained of difficulty in obtaining licenses to operate, required for the first time last week under new post-Brexit fishing agreements, prompting the US and France to send Navy patrol vessels to the area.

A retired has weighed in on the row between Britain and France over fishing rights around the Channel Islands post-Brexit.

French threats to blockade the harbor at St Helier and even cut off the self-governing British Crown Dependency’s electricity supply were slammed by Admiral Lord West, baron of Spithead, as “childish, irrational, petulant and dangerous” in an article for the Daily Mail.

The former First Sea Lord deplored the “militant behavior” of the French side in British territorial waters as something hailing back to the 19th century and the Napoleonic era.

Lord West, who was security minister during Prime Minister Gordon Brown’s administration, voiced his amazement over what he described as a “hysterical French over-reaction to a dispute over delays to paperwork for fishing licences.

Tensions had flared after France accused Jersey of restricting licences for small boats to operate within 12 miles of its shores, in a breach of the Brexit agreement, the simmering fishing rights row escalated.

As around 60 French fishing boats were revealed to be planning to sail to Jersey’s main port early on 6 May, Prime Minister Boris Johnson deployed two Royal Navy vessels to the area on Wednesday as a “precautionary measure”.

For anyone who hasn’t seen yet - the two blue vessels on the left are the Royal Navy’s HMS Tamar and HMS Severn; orange vessel around St Helier are the French fishermen; and the right hand blue one is the French Military Ops ship Athos, sent to carry out ‘patrol mission’ #Jersey pic.twitter.com/oPLoBndgpR

This prompted the French authorities to reciprocate by dispatching two naval patrol ships to the area the following day. The incident ended with the French fishing vessels sailing away and the sides embarking on negotiations.

“The citizens of the Channel Islands are British. Protecting them is more than our right – it is our duty, and the Prime Minister was right to send in a couple of Fishery Protection ships, HMS Tamar and HMS Severn,” wrote Lord West.

However, the decision by France to scramble two gendarmerie patrol boats, PCG Athos and PCG Themis, is perceived by the ex- First Sea Lord as an arrogant provocation and “gross breach of the UN Convention of the laws at sea.”

The retired admiral emphasized that what should follow is “legal discussion and debate”, not hasty moves and “their less-than-veiled warnings”.

While Thursday’s maritime incident was defused, if a blockade of Jersey had begun in earnest, the UK sailors could have worked with local police to board the French boats, and impound them, wrote Lord West.

“They no doubt have on board Royal Marine boarding parties and we are used to boarding foreign vessels and indeed UK vessels,” he told Times Radio on Thursday, recalling the Icelandic “cod wars”.

“I would hope that sense will prevail and people will take a step back and actually look at the details of this deal and finally of course, it’s up to getting lawyers involved if they are disputing the details of the deal”.

The current escalation of tensions was triggered by the new technicalities of granting licenses to French vessels operating in Jersey coastal waters.

The paperwork is a requisite part of the section of the Brexit agreement between the UK and the EU governing fishing, in effect since 1 May after a four-month grace period.

The French fishermen have been struggling to obtain licenses, allowing them to keep working in UK waters, including in Jersey, as they must now prove they have been fishing in these waters from 2012 to 2016 using GPS data, which some simply don’t have.

Recently Jersey announced it had granted fishing licenses to 41 French boats larger than 12 meters (39 ft), yet the “positioning technology” is not something smaller boats are typically able to carry to place on board.

According to France, the “new technical measures" had not been communicated to the EU, and were added later.

France’s minister for maritime affairs, Annick Girardin, on Tuesday claimed she was “revolted” by lack of access to Jersey’s waters for French boats. Girardin warned that the Crown dependency’s electricity supply, predominantly delivered by three underwater cables from France, could be cut off as a retaliatory measure.

In response, Downing Street denounced the threats against Jersey were “unacceptable and disproportionate”.