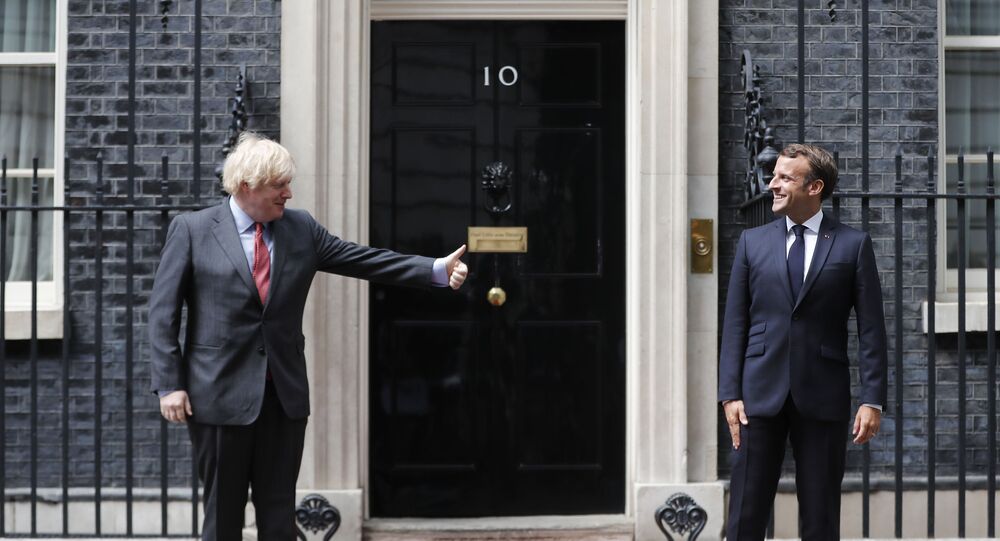 Tempers flared on Thursday between the UK and France in a maritime standoff over fishing rights to waters around the Channel island of Jersey as the French side accused the self-governing British Crown Dependency of restricting licences for small boats to operate within 12 miles of its shores, in a breach of the Brexit agreement.

The UK and France are eager to “dial down the rhetoric” after the maritime row over post-Brexit fishing rights prompted both nations to dispatch naval ships to the waters off the island of Jersey on Thursday, reported The Times.

Prime Minister Boris Johnson and President Emmanuel Macron will take steps to reset the “brotherly” relations between their two countries, which are currently “not where we want them to be”, according to cited government officials.

The British-French relationship has hit a new low, frayed by disputes over coronavirus vaccines, financial services, and now fishing rights – an issue that was one of the key sticking points during UK-EU Brexit talks.

“We’re a bit like a pair of brothers. We’re the closest allies and there is no fundamental unhappiness but things are bumpy,” a source was cited by the outlet as saying, adding that Johnson and Macron are expected to speak over the coming days “before next month’s G7 summit”.

The simmering fishing rights row escalated on Thursday after France accused the Channel Island government of restricting licences for small boats to operate within 12 miles of its shores, in a breach of the Brexit agreement.

While Jersey, a self-governing British Crown Dependency, is responsible for its own fishing rules, it called on the UK for assistance.

After being informed of the intention of around 60 French boats - mainly dredgers and trawlers - to sail early Thursday to St. Helier, Jersey’s main port, Prime Minister Boris Johnson deployed two Royal Navy vessels to the area.

France dispatched two maritime patrol boats to the waters off the British Channel island of Jersey, after Britain deployed two of its naval vessels in an escalating row over post-Brexit fishing rights https://t.co/UL2I7zT6Fd pic.twitter.com/KxVROA8ykx

The H.M.S. Tamar and the H.M.S. Severn were dispatched as a “precautionary measure” on Wednesday evening, in a dramatic show of support for Jersey.

​The following day France answered in kind, sending two naval patrol ships to protect the “safety of human life at sea” in the waters around the island, 14 miles off the French coast.

A video captured by an eyewitness showed a British ship owned by Jonathan Ruff rammed by the French trawler Lasgot near the St. Helier marina. No one was hurt in the incident.

​After some flares were reportedly fired, the French fishing vessels sailed away, while the two sides began negotiations.

Boris Johnson ordered the withdrawal of the two Navy ships by Thursday evening, with the UK government saying that "the situation is resolved for now" but "we remain on standby" to assist Jersey.

However, a spokesman for French fishermen from the nation’s Normandy region indicated the situation remained in "deadlock".

"Either this gets resolved, or retaliatory measures are taken," Hugo Lehuby was quoted by Reuters as saying.

The current spat over post-Brexit fishing rights is mired in the technicalities of granting licenses to French vessels plying the Jersey coastal waters.

The UK-EU Trade and Cooperation Agreement (TCA), which came into force on 31 December 2020, sets out new post-Brexit fishing rules, according to which EU boats can continue to operate in Britain’s territorial waters if they can prove historical fishing activity in the area.

In line with the section of the Brexit agreement governing fishing, in effect since 1 May after the end of a four-month grace period, Jersey granted fishing licenses to 41 French boats larger than 12 meters (39 ft).

© AFP 2021 / OLI SCARFF
Fishermen sort and load trays of salmon heads to be used as bait for crab and lobster pots as they prepare for their next voyage to sea, on the South Pier of Bridlington Harbour fishing port in Bridlington, north east England on December 11, 2020

According to France, however, "new technical measures" that had not been communicated to the EU, had been added. The “positioning technology” is not something smaller boats are typically able to carry to enable them to prove they fished in the waters of the UK’s coast from 2012-2016.

Thus, as the crown dependency began issuing the licenses, it stated that 17 of the 41 vessels that had applied had been unable to prove they had historical links to the fishing grounds.

© REUTERS / Toby Melville
FILE PHOTO: The village of Gorey Harbour and Mont Orgueil castle are seen in Jersey in this March 1, 2008 file photo.

The European Commission has stated that the British government notified it of the changes last week, adding it was in negotiations with London.

France, however, has slammed the UK for what it characterised as deliberate “red tape”.

France’s minister for maritime affairs, Annick Girardin, has also added fuel to the fire with a spate of incendiary statements on 4 May.

On Tuesday Girardin, “revolted” by lack of access to Jersey’s waters for French boats, warned that the Crown dependency’s electricity supply – 95 percent of which is delivered by three underwater cables from France - could be cut off in retaliation.

In response, Downing Street underscored, via its spokesperson, that threats against Jersey were “unacceptable and disproportionate”.

The current standoff has been likened to the acute tensions between Britain and its neighbours stretching from the 1950s to the 1970s, when the UK was embroiled in a confrontation with Iceland in what was dubbed the “cod wars”.

Fishing rights were also one of the thorniest issues when Britain negotiated its new trade agreement with the European Union, which came into force in January 2021.

In line with the deal, it was agreed that 25 percent of EU boats' fishing rights in UK waters will be transferred to the UK fishing fleet over a period of five years, during an "adjustment period". EU fishing quota in UK waters will be reduced by 15 percent in the first year and 2.5 percentage points each year after.

Starting from the summer of 2026, Britain can then cut quotas or exclude boats in a zone of 6-12 nautical miles.