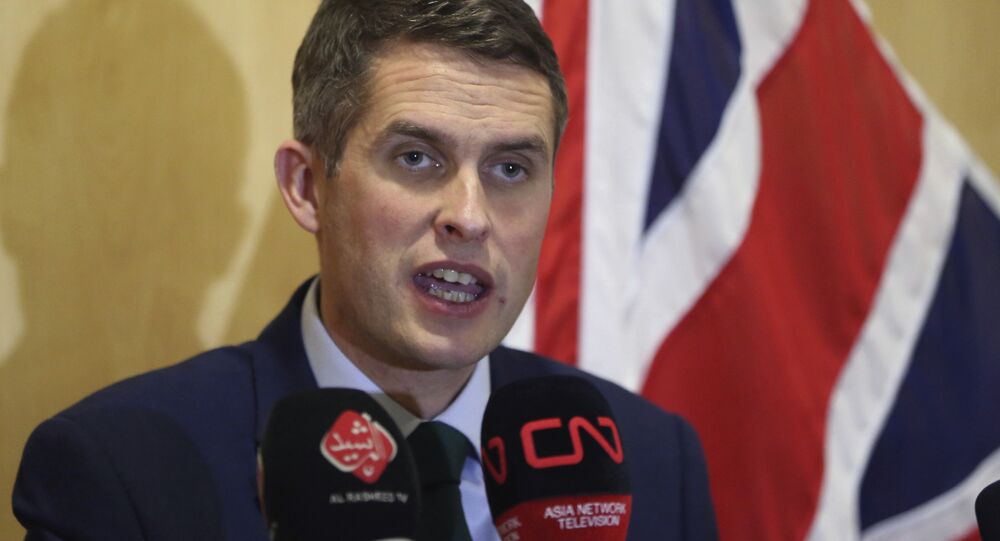 Speaking in Bristol on March 15, the British Defense Minister commented on what Russian might do in retaliation to the expulsion of 23 Russian diplomats from the UK. "Russia should go away and should shut up. But the government will consider what it does. It would be wrong to prejudge it," he said.

The Russian Foreign Ministry has commented on Williamson's tough statement, saying that it shows that Britain's partners are worried and London has things to hide.

"Highly Likely that the Secretary of Defense of Great Britain said: 'Russia should not take retaliatory measures, but withdraw and shut up.' And what else can the Defense Minister of a country — which conceals the circumstances of the use of chemical agents on its territory and does not want to transfer available information, as required by the Convention on the Prohibition of Chemical Weapons — say? London has something to hide. Their partners are nervous," Russian Foreign Ministry spokesperson Maria Zakharova stated.

The Russian Defense Ministry, in its turn, has also addressed this strident call, saying that it proves the voidness of UK's accusations against Russia.

"The rhetoric demonstrated today by the head of the British defense ministry Gavin Williamson is remarkable for his extreme degree of intellectual impotence," spokesman of the Russian Ministry of Defense, Major-General Igor Konashenkov, said.

According to the spokesman, Moscow grown used to fake news that demonizes the country and "has strong immunity against it."

During his first keynote speech since becoming Defense Secretary last year, Williamson has outlined the threats faced by the UK, modernization of the Defense Program, further investments in the armed forces, and the British response to the poisoning of the former Russian spy Sergei Skripal.

One of the questions posed to Williamson by a reporter in the audience was: "Russia has said it will expel British diplomats from Moscow. Has the UK got a further package of measures it could unleash in response? And could this include a military response?"

"What we will do is look at what Russia responds to what we have done. It's absolutely atrocious what Russia did in Salisbury. We have responded to that. Frankly, Russia should go away and should shut up. But if they do respond to the action we have taken, we will considerate it carefully and we will look at our options  but it would be wrong to prejudge our response," Williamson replied.

Defence Secretary Gavin Williamson says "there is no doubt where this attack came from: it came from Russia" pic.twitter.com/vbkKNGe9Gu

Williamson assumed the post of the Defense Sec in November 2017 and his nomination by the UK PM Theresa May came as something of a surprise, since Williamson has no military background.

© AP Photo / David Mirzoeff
Gavin Williamson, right, outside the Ministry of Defence in London after he was named as the new Secretary of State for Defence following the resignation of Sir Michael Fallon who admitted his behaviour had "fallen below the high standards required" in the role, Thursday, Nov. 2, 2017.

Williamson spoke of the "Russian threat," a subject he had already raised earlier this year, when he warned of a Russian attack on British infrastructure that could kill "thousands" in an attempt to align himself with more experienced counterparts.

"If we doubted the threat Russia poses to our citizens, we only have to look at the shocking example of their reckless attack in Salisbury," Mr. Williamson said on Thursday.

Williamson also pointed out that the "chemical threat doesn't just come from Russia but from others," which then led to the announcement of a sizable investment in a new chemical weapons defense center.

"But we have world-class expertise at Defence Science Technology Laboratory (DSTL) Porton Down and today I can announce we will be strengthening this capability by investing £48m (($67 million) in a new Chemical Weapons Defence Centre to ensure we maintain our cutting edge in chemical analysis and defense."

Porton Down is located only a few miles from Salisbury, where the former intelligence officer Sergei Skripal and his daughter collapsed on March 4. The chemical weapon laboratory of the British military is where the toxin in Skripal's case has been identified as 'Novichok'.

Shocking that the fiendish Russians brought nerve gas to Salisbury. Did they not know that there are huge stockpiles of it just 8 miles up the road in Porton Down, Britain's very own chemical weapons manufacturing facility. 40,000 people live in Salisbury. Now that is shocking. pic.twitter.com/RzFmEZLO4d

Porton Down is one of the few places in the world there are stockpiles of Novichok. Salisbury is less than five miles away. 🤔#justsaying pic.twitter.com/odlnEIvNbT

UK Home Secretary Amber Rudd will hold a meeting of the government's emergency response committee, Cobra, on Skripal's case, a source familiar with the government told Sputnik on Thursday. According to the source, relations with Russia will also be discussed.