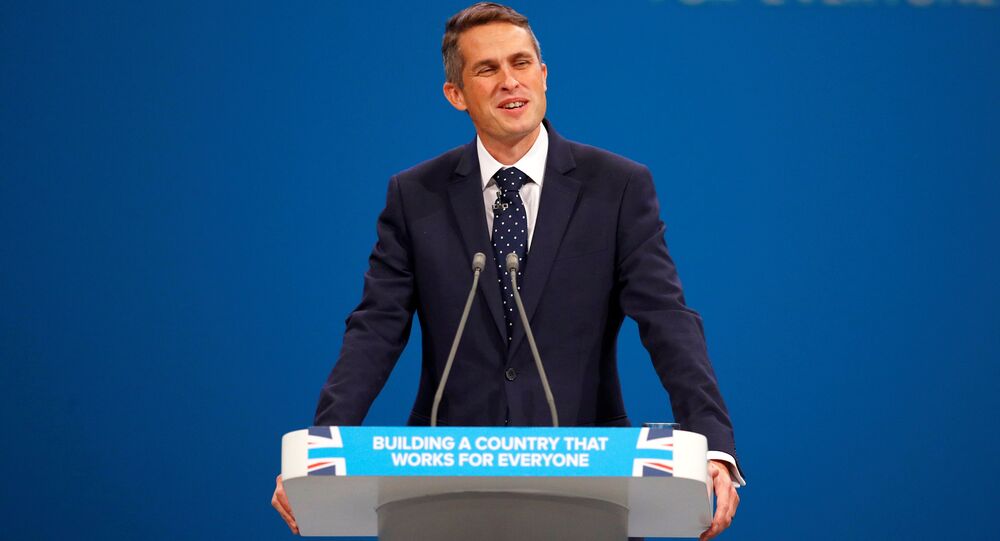 After Michael Fallon resigned as UK Defense Secretary on Wednesday, Theresa May has replaced him with an MP few outside Westminster have ever heard of. So who is the new man?

Mr. Williamson, appointed as the new Defense Secretary, was invited to Downing Street on Thursday, November 3, and given the job following the resignation of Michael Fallon.

Chief Whip Gavin Williamson made new Defence Sec — smiling on his way into No.10 earlier. pic.twitter.com/HSC3ryjMNR

Fallon had admitted touching a female journalist's knee during a conference dinner 15 years ago. His admission came as the British parliament has been engulfed in a sexual harassment and misconduct scandal and Mr. Fallon later said his conduct had "fallen short" of the standard required of a minister.

So who is the newly appointed member of May's cabinet?

Mr. Williamson has been Conservative MP for South Staffordshire in the English Midlands since 2010 and has a majority of 22,733.

He is only 41 but has played several key roles behind the scenes since the Conservatives came to power in 2010.

Mr. Williamson was parliamentary private secretary to then Prime Minister David Cameron between October 2013 and his resignation in July 2016, after the Brexit referendum.

Great to be out and about on the doorstep in #Perton. Looking forward to tonight's ‘Meet your Candidate’ event at Perton Civic Centre. pic.twitter.com/KmhgyFvLKh

Appointment Is a 'Risk'

He was then appointed Chief Whip, a role which became even more important in June this year when after a largely unsuccessful election campaign, Mrs. May lost her majority and was forced to rely on the Democratic Unionist Party (DUP) from Northern Ireland to keep a working majority.

Mr. Williamson was head of the whips, whose job it was to make sure Tory MPs towed the party line. He has impressed Mrs. May enough for her to promote him to Defense Secretary as a safe pair of hands.

Gavin Williamson is the new Defence Secretary. Given he was Chief Whip and knows all of the secrets that is truly astonishing.

Defence Sec is bigger better, and right now easier job than Chief Whip of minority government trying to get 8 bills thru before Brexit day

The choice of Mr. Williamson is something of a surprise as he has no military background and several political pundits had expected Mrs. May to choose Penny Mordaunt, a former armed forces minister who comes from a Royal Navy family.

Rodney Atkinson, founder of freenations.net website, one of Britain's most successful political economists and a former occasional adviser to ministers, told Sputnik of his shock at the appointment.

"I don't think anyone has heard of him before. He got into Parliament in 2010. He has done nothing at all in government of any sort. He voted to remain in the EU…he is obviously a trusted person within the [Tory] party and doubtless he also knows where the skeletons are buried," Mr. Atkinson told Sputnik.

When it comes to "a very important office of state — defense — at these difficult times, it [the appointment] seems a bit of a risk unless of course he is being asked to carry on and do as he's told given the established views," Mr. Atkinson added.

Mr. Atkinson said Mr. Williamson was a bit of a blank slate as far as defense policy is concerned as he had never made any utterances about it in public before his appointment.

The social media users have also reacted to the new appointment, with some even tipping Mr. Williamson as the future Prime Minister.

New Defence Secretary Gavin Williamsn once described a "sharpened carrot" as a weapon. Buy a lot for £200bn he'll be wasting on nukes

Ted Heath used being chief whip as his springboard into Number 10. Perhaps Williamson now has a chance of doing the same?

Smart Gavin Williamson, from Cameron’s bag carrier to defence sec in 4 short years. Now in a position to become the next PM.

Make no mistake, Gavin Williamson wants to be prime minister. And he knows all the dirt on his colleagues.

Mr. Williamson arrived at the Ministry of Defense on Thursday morning to meet military chiefs but did not speak to reporters.