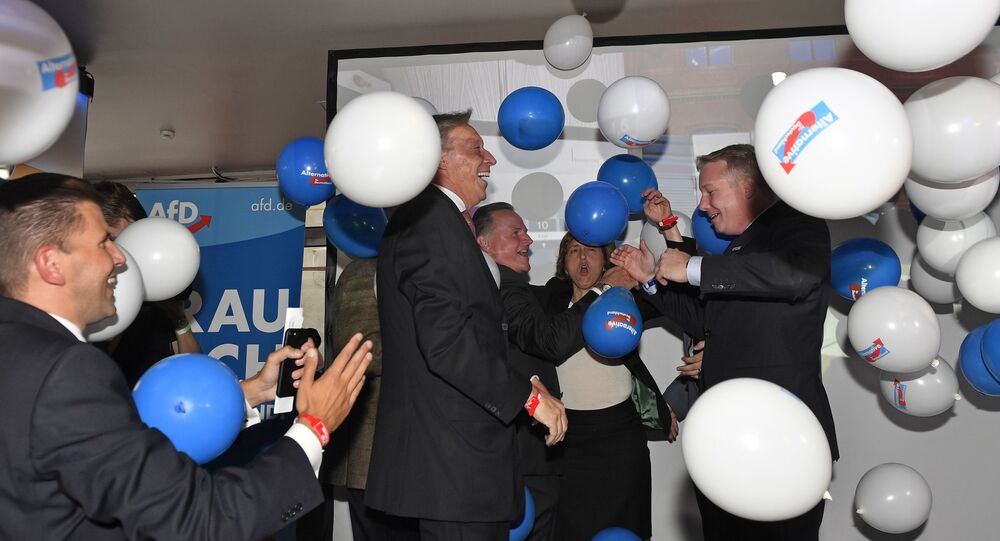 "When you see the polls, 60 percent of the voters for the AfD are not the followers of this party. They specifically noted that they are voting in protest against other parties," Dr. Jochen Staadt, head of the Free University in Berlin's research team on the history of divided Germany told Sputnik Radio.

He further explained that the immigration crisis, which "was not enough respected by other parties," has been one of the reasons behind this protest voting, noting that AfD, which was founded merely in 2013, showed its most robust results in Eastern Germany.

Angela Merkel has been strongly criticized for her open-door policy, which allowed more than one million asylum seekers enter the country in 2015 at the height of the refugee crisis.

"There are mixed reasons in East Germany for people voting for the AfD. One reason is the situation with immigration because before the reunification, East Germany was not used to hosting foreign workers as [was done] in West Germany. They were not used to living in an open society," he told Sputnik.

The second reason, he explained, is that there are still differences between East and West Germany that people in East Germany don't accept. Before, the left party Die Linke was able to play the role of the protest party in East Germany. Its role, however, has now been overtaken by the AfD, which gained more votes in Saxony than Merkel's party. The historian described this as a sensation.

© REUTERS / Kai Pfaffenbach
Merkel's 'Jamaica' Future: AfD Rushes Into Parliament 'Ruining All the Game'
There are traditional conservative parts of Germany where  CDU/CSU still have the most direct voting mandates for their representatives, like in the parts of North Rhine-Westphalia, he went on to say. However what is astonishing is that in the part where the conservative alliance was the strongest throughout the years, Bavaria, the CSU has lost many votes. Now they have to think why they have lost these votes, because next year they will have local elections in Bavaria. The CSU has already pointed out that they will close the gap on the right side, Dr. Staadt explained.

The historian also commented on the further steps of the German Chancellor, who will now have to form a coalition to be able to secure the majority of seats in the parliament.

© REUTERS / Axel Schmidt
Merkel's Position Shaky, While AfD Rise 'Is Return to European Norms'
Despite Angela Merkel’s conservative  alliance of two political parties, the Christian Democratic Union of Germany(CDU) and Christian Social Union in Bavaria (CSU) came first in the country general elections with 33 percent, many experts called it a Pyrrhic victory, which is a tantamount to defeat. The bloc showed the worst results in almost 70 years, although it still has more seats in the parliament than any other party.

The Social Democratic Party, led by former EU Parliament President and Merkel's key rival Martin Schulz, which came in second with 20.5 percent, but also showed poor results, has already said it would go into opposition. Schulz said the outcome of the election meant the end of the grand coalition with Merkel’s conservative bloc.

"The German Chancellor will try to setup a coalition with the Free Democratic Party (FDP), and the Greens, which wil be difficult. If this coalition fails, I think she will try again to convince the Social Democrats by pointing out that this is a [chance] for the country to have a stable government. Otherwise I only see the possibility that she might have minority government without the Bavarian CSU. The Bavarian CSU will respect the minority government of the CDU, Free Democrats and Greens. If that is not possible, they have no other choice but to think about new elections," Dr. Staadt concluded.