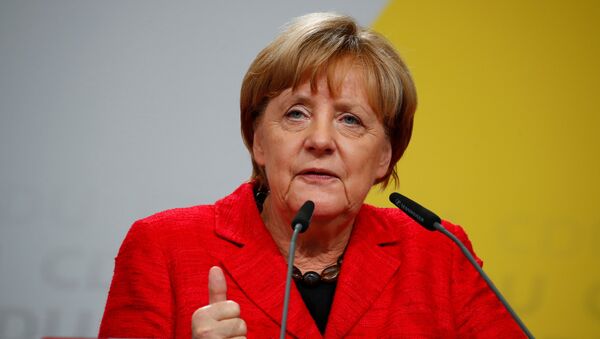 © REUTERS / Axel Schmidt
Subscribe
International
India
Africa
Angela Merkel's CDU has emerged as the biggest party in the Bundeswahl, tainted however by a collapsing vote share and the rise of Alternative for Germany (AfD). Experts have told Sputnik she may not have many days as Chancellor left as a result, while the AfD may prove of service to German political culture.

Angela Merkel may be set to remain Chancellor, but Professor Nils Diederich of the Free University of Berlin has told Sputnik many Germans now want Merkel to "finish up her work" and "leave it to other people."

The results of the Bundestagwahl are now fully tallied — and while Merkel's CDU/CSU coalition managed to pull into a faraway first place, the AfD party won a surprising 13.5 percent of the September 24 vote.

"For the first time since World War II, we have seven parties, and an extremist party, in parliament. This will change much. Voters wanted to get rid of the 'grand' coalition, and they want a clear alternative to the established parties. Many people now want Merkel to finish up her work and leave it to other people. I believe next week internal discussions will begin on when she should leave, and there could be an announcement after the coalition is formed in two to three months. No one knows who could follow her though," Professor Nils Diederich of the Free University of Berlin told Sputnik.

Most notably, the Social Democrats (SPD) virtually imploded, with the party's vote falling by over five percent — the party's worst showing ever — and opted to go into opposition as a result — another "grand coalition" with Merkel is said to be off the agenda permanently. 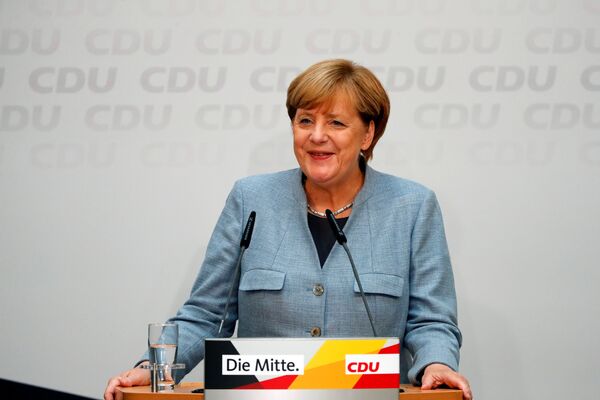 Conversely, the Free Democrats, back in parliament after four years, finished slightly better than expected, as did the Greens — meaning Merkel is now compelled to establish a "Jamaican" three-party coalition with the pair.

Perhaps the most shocking result saw the AfD confound all analysts' expectations and win 94 seats in parliament, becoming the first unashamedly right-wing to sit in the Bundestag since the 1930s in the process. The Chancellor's extremely liberal approach to the refugee crisis may well have cost her severely. Merkel's CDU compatriot Michael Fuchs acknowledged as much in a post-election diagnosis with the mainstream media, noting the CDU's policies on refugee intake were "not liked" by voters.

Whatever the truth of the matter, Werner Josef Patzelt, a German political scientist at TU Dresden, believes the election will be considered a "watershed" for German political parties, and AfD could emerge as a "continuous element" in the party system. 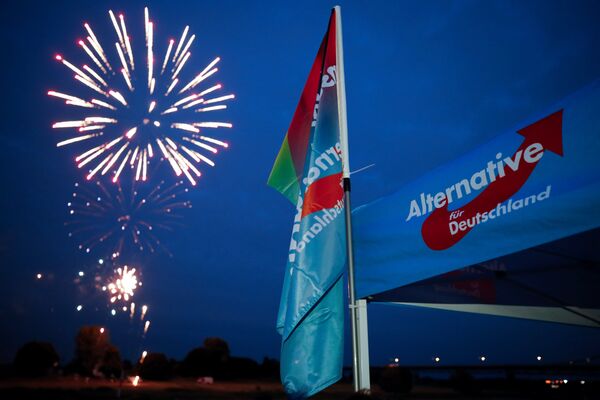 "In nearly all European states, you've had strong right-wing populist parties. Previously Germany was an exception, partly due to the legacy of its Nazi past, and partly due to the attempts of the Christian Democrat Union trying to integrate far-right individuals into its own ranks, to prevent the emergence of such a party. From this perspective, the rise of the AfD is a return to European norms. The established parties have allowed this party to emerge," Mr. Patzelt told Sputnik.

He also noted the AfD have not only become the second-strongest party in East Germany, but the largest party in the state of Saxony.

"The Christian Democrats underwent a process of 'social democratization,' and did not integrate Germans who are right-wing, or even far-right.

"The AfD has filled this representation gap, with immigration politics the central mobilizing factor. People are terrified of the return of 'Nazis' to parliament, but we'll wait and see. If Nazis are in parliament, they will be isolated quite soon, they will attract much criticism and ruin the public image of the AfD and its chances in future elections. Still, opposition is always an advantage to a political system, and if the AfD plays its role in a systematically sound way, it will do a service to Germany's political culture," Mr. Patzelt told Sputnik.

Schulz Holds Press Conference After His SPD Comes Second in German Vote (VIDEO)
Commenting on the results of the election, SPD leader Martin Schulz said Merkel was election's "biggest loser" — perhaps somewhat laughable given his party's drubbing in the polls, but he may well be right.

Merkel's "auf wiedersehen" from the German political stage is unlikely to happen overnight, but her days in office are arguably numbered.

Despite thumping her opponents in the vote, support for her party fell by over 20 percent from 2013 — despite low unemployment, a comparatively booming economy and balanced budget, typical engines of electoral success that should've translated to an easy, landslide win for the CDU.