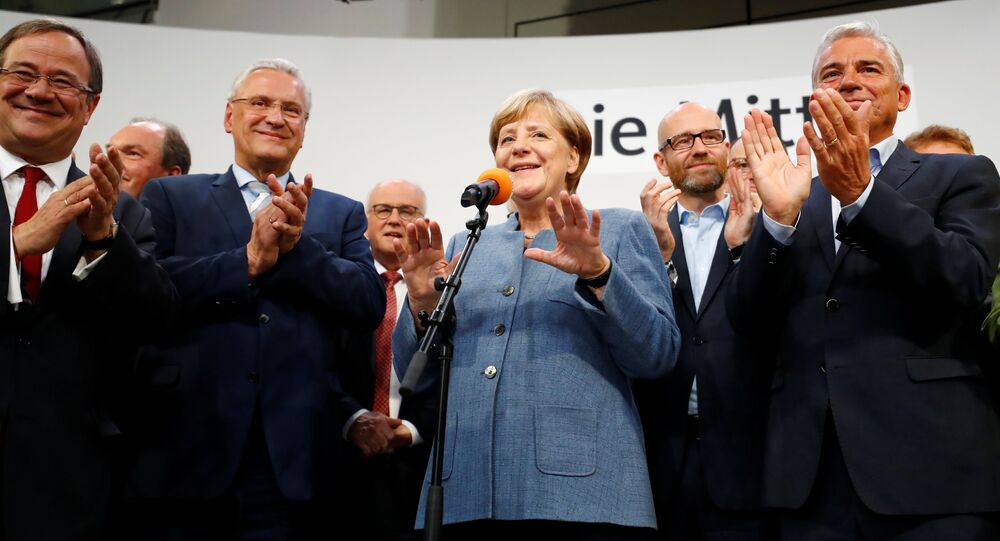 Angela Merkel will be the German Chancellor for a fourth term now that her CDU/CSU bloc has won the parliamentary election. However, her political future is not at all cloudless amid the Social Democrats declaring opposition and a nationalist party to the right of the CDU/CSU entering the Bundestag for the first time since the 1940's.

For the first time, Eurosceptic right-wing AfD (Alternative fur Deutschland) party (Alternative for Germany) has secured the third place in the country's federal elections with 12.6 percent of the popular vote. It will now get 94 seats in the Bundestag, considerably decreasing the mandates of Angela Merkel's CDU/CSU bloc, which won the elections with 33 percent.

The historic results of AfD mark the first time the Bundestag has seen a major conservative party other than the CDU/CSU in half a century.
The Social Democratic Party (SPD), led by former EU Parliament President and Merkel's key rival Martin Schulz, ended up second with 20.5 percent of the votes.

© REUTERS / Fabian Bimmer
Talking With 'Angry Germans': Why Some Have No Interest in Parliamentary Vote

On Monday, the German Federal Returning Officer announced that the 19th Bundestag (legislature) will be increased by 78 seats, compared to the previous one, due to the enhanced position of the minor parties, and will be composed of 709 seats.

Despite having secured a clear win in the election and the largest number of seats (246), Angela Merkel has still failed to get the majority of mandates and will be forced to form a coalition.

A task that might prove rather tricky since her major competitor and former ally, the Social Democratic Party (SPD), has already announced that it is not going to participate in the alliance this time round.

With her Marxist-influenced partners now set to become the opposition, the Chancellor could be therefore forced to turn to minor parties to form a government.

© Sputnik / Vladimir Sergeev
Elections in Germany, France in 2017 May Facilitate Russia–EU Dialogue
According to a German political analyst Alexander Rahr "there is every indication that there will be a so-called 'Jamaica' coalition of three parties: the Christian Democratic Union/Christian Social Union (CDU/CSU), Free Democratic Party (FDP), and the Green Party."

"However, it is hard to foresee how it will perform at the federal level. I think it is simply impossible, but there is no other chance to form a capable government in Germany," Rahr told Sputnik, adding that he does not rule out new snap parliamentary elections, as the looming ruling coalition could be very fragile.

The term "Jamaica" coalition refers to an association between the symbolic colors of the parties in such a coalition: the CDU/CSU block is represented by the color black, the Greens are green, and the Free Democrats yellow — together they make the colors of the Jamaican flag. It also alludes to the perception (from a German point of view) of such an alliance as an "exotic" constellation, enhanced by complicated relationship between the two minor parties.

Following the elections, Angela Merkel however expressed a belief that the three parties will be able to overcome all the difficulties and set up a successful alliance.

'Tough Times' for the German Leader

© AFP 2021 / John MACDOUGALL
Head of SPD Schulz Admits Defeat in Elections in Germany's North Rhine-Westphalia
In the meantime, forming a coalition might not be the biggest challenge ahead for the veteran Chancellor. Top AfD election candidate Alexander Gaufland has already warned that the government, "whatever it will look like, should get ready for tough times."

"We’ll chase them. We’ll take back our country and our people," he added.

A threat, that mrs. Merkel brushed off during her own press conference. "I believe that parties that may form a coalition are able to make a decision themselves, despite all the contradictions… This will be reflected in future coalition agreements, but the Alternative for Germany will not have any influence on it," the Incumbent Chancellor told reporters on Monday.

Ahead of the elections, AfD has already signaled tough times for Angela Merkel. AfD parliamentary candidate Waldemar Birkle warned that his party intended, once elected to the Bundestag, to "launch a parliamentary commission to investigate Merkel’s decision to open borders in 2015, without seeking approval from the Bundestag."

AfD, founded merely in 2013 by a group of economists and academics as an anti-euro party, has then shifted its focus to immigration and has been steadily gaining popularity among Germans since the outbreak of the migrant crisis in 2015.