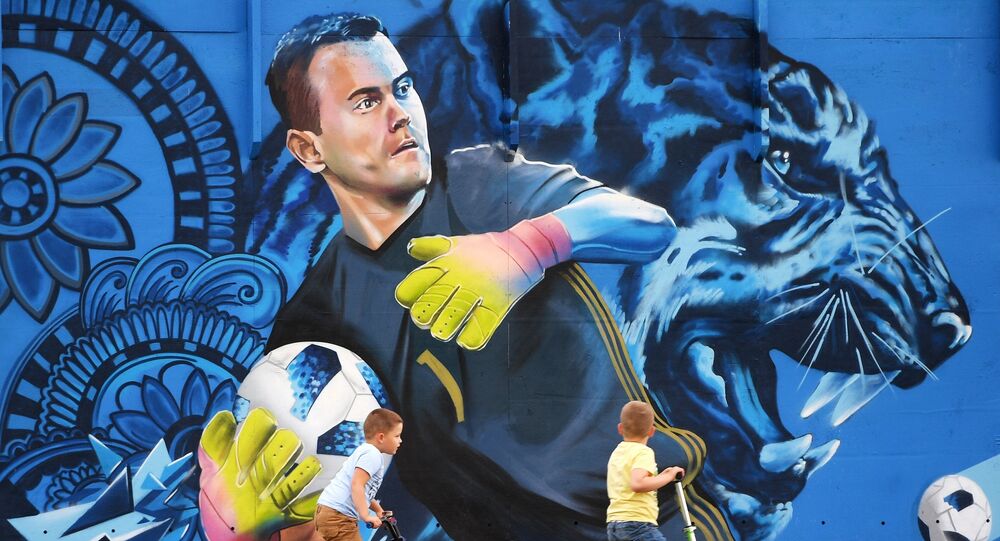 What a year it has been in sport. In the summer in Russia, we enjoyed watching one of the most exciting football World Cups ever, with a number of memorable matches.

The tournament was won by France who beat Croatia (tipped up in my Sputnik column as one of the best outsiders when available at 40-1), 4-2 in the highest scoring final since 1966. The anti-Russian lobby in the west did their best in trying to scare people from attending the event, but it proved to be a huge success. Once again, it showed that when neocons say something, we should automatically believe the opposite.

As we head towards Christmas, here are my end of year ‘Sputnik Sporting Awards'. Do you agree with them? And if not, what are yours?

This award goes to Zenit St Petersburg. In August they lost the first leg of the Champions League qualifier 4-0 to Dinamo Minsk.

© Sputnik / Ilya Pitalev
Russian Team Makes Huge Jump in Rankings After Home World Cup - FIFA
They were 2-0 up in the home leg, when with 18 minutes to go one of their players, Leandro Parades, was sent off. Surely it was now mission impossible for the Russian side? But incredibly Zenit levelled it to 4-4 on aggregate in normal time. Minsk then scored first in extra-time meaning Zenit had to score another two goals to progress. In the end, they netted four times, to win 8-1 on the night and 8-5 on aggregate.

As I noted here, it was the biggest Europa League/UEFA League comeback in 33 years. We'll probably have to wait until 2051 to see another one like it!

This award goes to Bolton Wanderers. The English Championship side looked to be going down to League One, as they trailed 2-1 at home to Notts Forest with just four minutes to go in their final game of the season in May.

Meanwhile, their closest rivals Burton Albion were drawing at 10-man Preston. But Bolton scored two goals in two minutes to win 3-2, while Burton, pushing for the win that they now needed, conceded in the 93rd minute. It was a Great Escape that Steve McQueen and Harry Houdini would have been proud of, but Bolton may have to do it again this year, as they are once again in the relegation zone.

All the fans in the World Cup in Russia were terrific but special mention has to go the extremely well-behaved and very sporting Japanese, who stayed on to clean up the stadium after their heart-breaking, last-gasp 3-2 loss to Belgium in the round of 16.

This award goes to the former Bundesliga player Stig Toefting, for letting rip in the tv studio… Watch the video and see if you can keep a straight face. We never get this sort of thing happening on Match of the Day!

Over the jumps, it has to be this year's epic Irish National at Fairyhouse in which seven horses were still in contention coming to the last and there were five fighting it out as the finishing line loomed. In the end, General Principle just got up with a late lunge. The starting price was 20-1 but I had backed him earlier at 33-1 so it made for a very happy Easter Monday!

F1 fans have chosen the US Grand Prix on 21st October and it's hard to disagree. It was a race that had almost everything-and ended up with Kimi Raikkonen's first GP win since 2013. Eventual world champion Lewis Hamilton came third, but does the now five-times world champion really get the credit he deserves?

Five years after Wigan Athletic beat Man City in the 2013 FA Cup final, the minnows from Lancashire did it again, this time in a fifth-round FA Cup tie.

As I argued here, given the financial imbalance between the two sides, you could say it was not just the greatest act of giant-killing in 2018, but in the history of the modern game.

After a poor start, Europe was as big as 9-2 to beat the US in this year's Ryder Cup on the Friday morning of the event. But as I highlighted here, Europe's golfers were still a good bet as they had much in their favour.

© Sputnik / Yelena Pakhomova
Champions Day at Ascot, Bold Czech Challenge and Football Predictions
We must also mention here the terrific performance of Czech racehorse Subway Dancer, who was available at the absolutely huge odds of 250-1 on the morning of the Champion Stakes at Ascot on 20th October. He was placed at 66-1, still providing a very decent each-way return, but there's hope that readers of my Sputnik column, got some of the 250s!

Of course there's still plenty of sport to come in 2018, starting with this weekend‘s football programme. We got Aston Villa 2 West Brom 2 right last week, and also predicted Chelsea's ‘shock' win vs. Man City. Can we do as well this week? Let's hope so.

Here are my predictions: