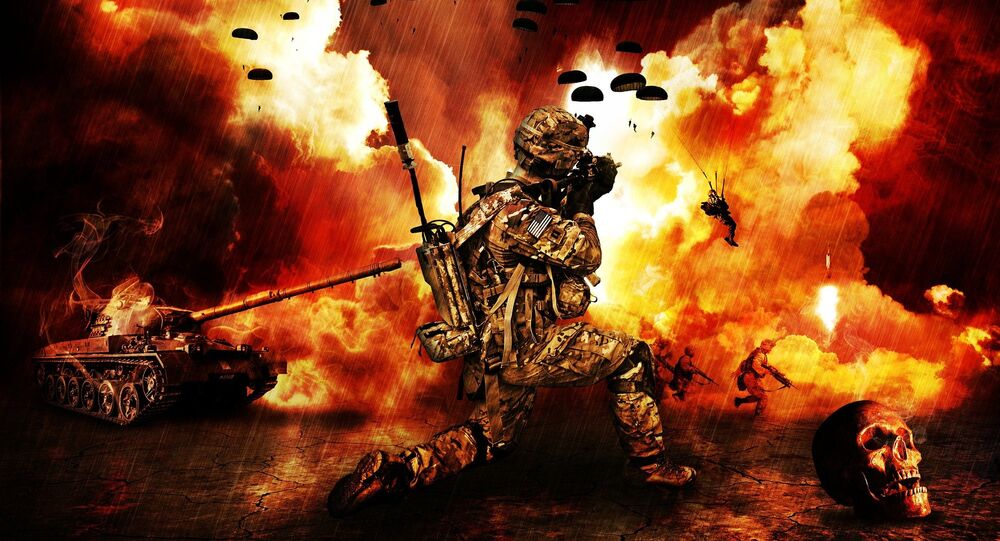 Doomed By History Unless…

It seems bitterly ironic that as world leaders gather in Paris this weekend to commemorate the centennial end of World War One, international tensions and the threat of war are once again haunting humanity.

Stephen Cohen, Princeton professor of history, recently warned that the risk of a nuclear war between the US and Russia is greater now than at any time since the Cuban missile crisis in 1962. Given Cohen's renowned academic expertise, such a warning should be sobering, and not overlooked as mere hyperbole.

© REUTERS / Michaela Rehle
Anti-War Protests Continue in Munich as World Leaders Gather for the Annual Security Conference
One country seems to be the common denominator in generating the danger of war — the United States. Washington is pushing aggression towards numerous nations, simultaneously, from Russia, China, Iran to Venezuela, as well as antagonizing its supposed allies in Europe over trade and other commercial interests.

This weekend in Paris, US President Donald Trump will join with other world leaders, including Russia's Vladimir Putin, in holding a commemorative event marking the 1918 armistice.

But, pointedly, Trump is reportedly "snubbing" a peace summit to be held later the same day in the French capital. Dozens of other world leaders, including Putin, Germany's Angela Merkel and Turkey's Recep Tayyip Erdogan are due to participate in the peace conference.

Why Trump is avoiding the peace summit is not clear. His cancellation seemed to be an abrupt decision. But it could be a swipe at French President Emmanuel Macron.

Earlier this week, Macron made an extraordinary verbal attack on Trump and presumed American global leadership. Macron called for the setting up of a European army in order to protect the continent from foreign powers, including the US.

"We have to protect ourselves with respect to China, Russia and even the United States of America," said the French president.

That's right, you read that correctly. A purported European ally was saying that the US is a threat to Europe.

Not that European citizens should entrust their security to the likes of Macron. The so-called "president of the rich" cares little about the livelihoods and wellbeing of ordinary people. Macron, who exudes an aristocratic arrogance, is pushing through draconian laws that will seriously erode workers' rights and public welfare. The French leader, it is clear, is not on the people's side.

© Photo : National Museum of the USAF
New US Nuclear Doctrine Threatens War Against 'Any Rival Challenging US World Order'
But his comments regarding the formation of a European army to counter American "bullying" are significant in that they reveal one important thing. The rivalry of nation states is reemerging sharply once again — even among those nations that are considered to be allies.

World War One, also known as the Great War, was arguably a culmination of intense nation-state rivalry, especially among the European colonial powers. It was about these powers jockeying for position to assert economic advantages over perceived contenders. The advantages pertained to ruling class interests, not the mass of ordinary workers and their families.

Up to 20 million people were killed in the four-year war from 1914 to 1918. It was the first industrial-scale international conflict. It was supposed to be the "war to end all wars". Yet only 20 years later, the world would be plunged into an even more infernal catastrophe of World War Two for which the death toll escalated four-fold up to 80 million, with most of the victims being civilians. That war also ushered in the era of nuclear weapons, which means that any future international conflagration could spell the end of humanity and the planet as we know it.

Evidently, while world leaders gather in Paris this weekend the solemn expressions by some about war and never repeating it are rather hollow.

European leaders in particular deserve censure. They obviously know full well that their American "protector" is nothing but a selfish bully. Macron's remarks are testament to that awareness. Germany's Merkel also knows that Washington's haranguing over trade disputes and the Nord Stream 2 gas project with Russia is the action not of an ally but rather of a domineering competitor that doesn't give a fig about German interests.

© CC0 / tavoohio / 1280px-BRP_Rajah_Humabon_(PF_11)
Philippine Navy Decommissions Oldest World War II Warship
We can cite many other examples of Washington treating Europeans like a doormat, such as the way Trump is dictating they have to comply with US sanctions on Iran, thereby jeopardizing investments from Paris, Berlin, Rome and others.

However, if that is the case, then why are European states facilitating the US-led NATO military alliance to ratchet up deplorable and ineffably dangerous tensions with Russia? This month saw the biggest-ever NATO war drills since the Cold War being held in the Arctic region near Russia's borders.

European leaders are caught in a curious, disgraceful double-think. They surely know that the US, especially under Trump, has no regard for their interests. He is prepared to rip up the Intermediate-Range Nuclear Forces Treaty, which could put Europe on a hair-trigger for nuclear war with Russia.

Still though, European governments meekly go along with Washington's blatant policy of aggression towards Russia, as seen from their participation in NATO provocations and in imposing trade sanctions on Moscow over dubious propaganda claims about Russia's interference in Ukraine, the Balkans and Baltic states.

The specter of war continues to haunt the world, even as so-called political leaders around the world don solemn faces and enunciate doleful pledges concerning World War I and II. There is no guarantee against World War III erupting.

That's because nation-state rivalry and the pursuit of national advantages over others — imperialism — is as alive today as it was 100 years ago. History is not a dead past. It is a living continuum.

The strongest nation state, the US, is the one that is most pushing the agenda of aggression as it tries to stave off perceived competitors. It seems woefully poignant that President Trump has decided to not even show up at the peace summit in Paris this weekend.

© Sputnik / Evgenia Filimianova
London Marks World War II Victory Day With Immortal Regiment March
Nonetheless, the European leaders are contemptible in that they — despite occasional bickering with their American "ally" — are equally complicit in fomenting dangerous tensions with Russia, China, Iran and others by not standing up to Washington. Their weakness indulges the American bully's bad behavior.

That's because the Europeans are wedded to the same nation-based capitalist system as the Americans are. This nationalism is driving tensions between countries once again, as did in the run-up to World War I and II.

By not learning from history and understanding underlying causes then, as the saying goes, we are doomed to repeat history.

What is needed is an international system of global cooperation in which national interests of private profit are replaced with a new organizational basis for production, finance, trade and social wellbeing. If nations were organized on a genuinely democratic basis meeting the paramount needs of their people instead of the elite profit interest of their oligarchs, then international tensions and rivalry would be obviated.

Hopefully, ordinary citizens of the world are increasingly aware of the urgency to jettison nationalist capitalism and its relentlessly warmongering tendency. The problem is, we don't — as yet anyway — have the political leaders who see in that way. As it is, lamentably, we are doomed to repeat history — unless the mass of people rise up and assert their democratic rights.