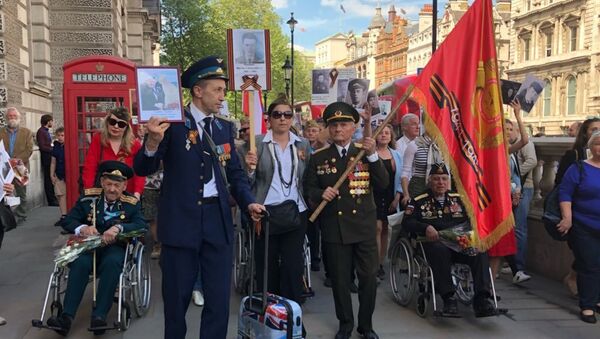 A march in commemoration of World War II veterans, heroes and all those who fought against Nazi Germany kicked off on May 9 in the center of London. Hundreds gathered to take part in the Immortal Regiment parade, carrying photographs of relatives and friends who have fought and lost lives to end the war.

The tradition, first observed in Russia in 2012, sees people walking together on the Victory Day in many cities around the world to pay tribute to veterans and victims the Second World War, also known as the Great Patriotic War in Russia.

London held its first march in 2016 with more than 2,000 people in attendance. In 2017, equally large number of participants attended the march in the British capital.

On Wednesday, crowds gathered at Trafalgar Square in the center of London and marched via Whitehall, Big Ben, Houses of Parliament and Westminster Abby.

Commemoration ceremonies of the Allied forces lives lost in Britain took place on May 8, also known as VE Day in Europe, marking the moment when in 1945 the army forces of Nazi Germany surrendered to the Allies of World War II.

Wreath-laying ceremony at the Dundee International Submarine Memorial was held on 7.05. It commemorates the tragically lost crews of the Allied submarines based in Dundee during the WWII, including the crew of the Soviet submarine V-1 l and the Hero, captain II rank I.Fysanovich pic.twitter.com/tRbS2hVYg8