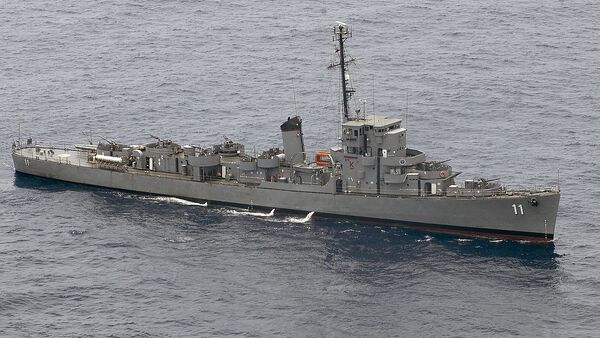 PS-11 Rajah Humabon, the oldest World War II-era destroyer, has been decommissioned by the Philippines after four decades of service.

The Philippine Navy decommissioned the last of its World War II-era warships and one of the oldest naval ships in the world still in service, PS-11 Rajah Humabon, after four decades of service, according to a report by Philippines News Agency.

​A decommissioning ceremony took place Thursday at a naval base in Sangley Point, Cavite province, attended by former commanding officers who had served aboard the ship.

"They turned sentimental because the ship that had given them pride and accomplishments when they served as commanding officers is now going to retire from service," Philippine Fleet spokesman Lt. Sahirul Taib told Inquirer.net.

Duterte Threatens to Throw UN Experts Coming to Philippines ‘to the Crocodiles’
The ship had been commissioned on August 29, 1943, as US Navy destroyer escort USS Atherton, and had patrolled the Atlantic during the war. In 1945, the US Navy decommissioned the ship and in 1955 transferred it to the Japanese Maritime Self-Defense Force. The ship served in Japan for 20 years, after which it was technically returned to US Navy in 1975 while physically remaining in Japan. One year later, the ship was transferred to the Phillipines Navy, after an extensive refit in South Korea.

Renamed PS-11 Rajah Humabon, the former USS Atherton became the Philippine flagship until Del Pilar-class ships arrived from the US in 2011.

The Rajah Humabon then served as a ceremonial ship for welcoming foreign visiting warships in Manila Bay, serving 38 years in the Philippine Navy.

The decommissioned ship will become a part of the Philippine Navy museum in Sangley in due time, Taib said.

"Visitors could tour around the ship in the future. It has become a part of history with its accomplishments," he said.

Filipino Defense Secretary Delfin Lorenzana said he has been tasked with "fast tracking" the decommissioning of vintage ships.

"They are old and uneconomical to maintain," he observed.