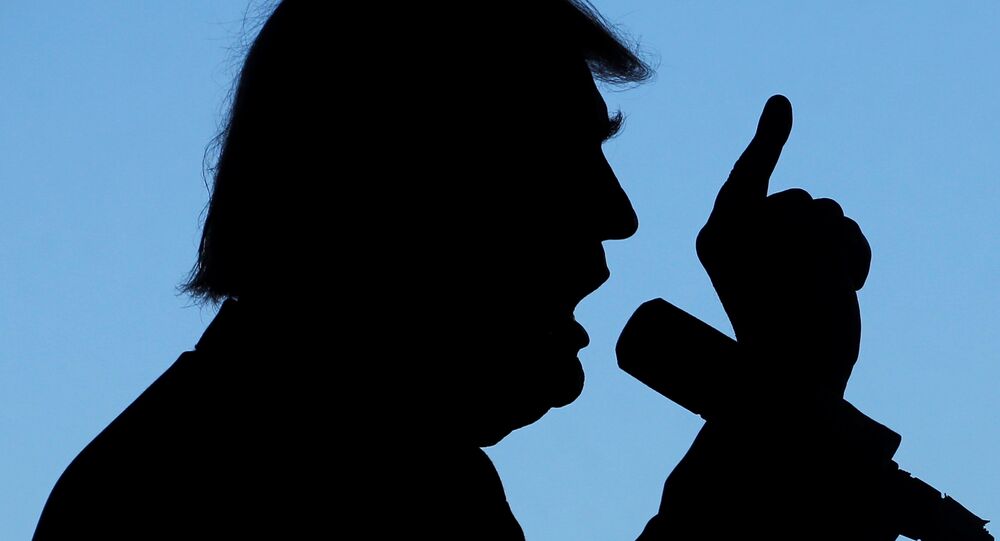 Are Saudi Jihadis Entitled to a "Safe Zone"?

Straight after the “extreme vetting” blitzkrieg – which, technically, is not a “Muslim ban” - President Trump called the lucidity-impaired King Salman of Saudi Arabia and “requested, and the king agreed to support” (in the words of the White House), safe zones in Syria and Yemen.

© AP Photo / Hasan Jamali
Trump's Immigration Order Puts Main US Ally in Mideast 'in Awkward Position'
The official White House statement did mention a Saudi request for Trump to lead "an effort" not only to "defeat terrorism" but also to improve the Middle East socially and economically. This could be easily interpreted as the House of Saud asking Trump to lead the Arab world. It will be no doubt exciting to monitor how the pan-Arab street will manifest its “approval”.

As for the safe zones, everyone is waiting for the Trump-ordered Pentagon assessment, to be led by “Mad Dog” Mattis, on how they would be enforced. Drones? Multiple Black Hawk patrols? Squadrons of fighter jets? Boots on the ground?

I’ll bomb your visa to ashes

© AFP 2021 / ATTA KENARE
Why Iran Ended Up on Trump's List of Countries Posing Terrorist Threat to US
Homeland Security was already targeting these seven nations as “countries of concern”. Customs and Border Protection, detailing the “Visa Waiver Program and Terrorist Travel Protection Act of 2015”, even explicitly mentioned the seven nations. The whole package was signed into law on December 18, 2015, as part of the Omnibus Appropriations Act of fiscal year 2016.

So the Trump White House is essentially enforcing a law that already exists. In a nutshell, it has been official USG policy for over a year to target, and turn admission to the US, an absolute odyssey for these nationals.

Whether these nations should be in the list is a completely different issue. The notion that Iran “exports terrorists” exists only in the fantasies of neocons/deranged Likudniks and their shills.

What the list does is to evoke the notorious neocon-penned Pentagon memo, revealed by former NATO supreme commander Gen. Wesley Clark, describing “how we’re going to take out seven countries in five years, starting with Iraq and then Syria, Lebanon, Libya, Somalia, Sudan and then finishing off (with) Iran.” Yemen ended up replacing Lebanon.

The record shows the USG has bombed (into democracy or otherwise), directly or indirectly, no less than six out of the seven nations on Obama/Trump’s list. The exception is Sudan. In the case of Iran, Washington destroyed a packed Iran Air passenger jet in mid-air in 1988 with a missile, and has been consistently mute on Israeli targeted attacks on Iranian nationals.

Saudi Arabia's ideological matrix inspires Salafi-jihadis all across "Syraq" and beyond.

Not to mention that most Daesh jihadis hail from Tunisia; their numbers are ahead of Saudi Arabia, Russia (essentially Chechens), Turkey and Jordan. None of these American allies — Russia, of course, is a strategic competitor — are on the seven-nation list.

Here’s the undated draft, that should be carefully compared with the final EO.

© AP Photo / Hussein Malla
How Trump's Safe Zones May Help Syrian Armed Rebels to Catch a Second Wind
On both there’s no explicit mention of Muslims or Islam. Yet the key fact is how the former section 6, Establishment of Safe Zones to Protect Vulnerable Syrian Populations, simply disappeared.

The only reasonable explanation is that Trump, former New York City Mayor Rudy Giuliani (who helped draft the EO) and chief strategist and new National Security Council stalwart Steve Bannon, had to acknowledge that it’s Moscow who’s in charge in Syria, not Washington.

So the safe zones had to go, just to reappear in Trump’s call to King Salman.

The House of Saud is frantically spinning its (glorious?) absence from the list, plus the phone call, as evidence of Saudi Arabia configured as leader of the Arab/Muslim world.

For the official Saudi Press Agency, “the view of the two leaders were identical” in terms of confronting terrorism and extremism, as well as “those who seek to undermine security and stability in the region and interfere in the internal affairs of other states.”

That’s a not exactly subtle reference to Iran. A Trump-House of Saud anti-Iran axis is on the move – part of the Kissinger-advised strategy of breaking up Eurasia integration by seducing Russia away from China and harassing Iran.

Tehran, cautiously but predictably, is already engaged to retaliate against the visa ban. And the tension will be up a notch next week, when naval exercise Unified Trident starts in the Gulf, with US, British and French naval vessels simulating an attack on – who else — Iran.

So, essentially, Trump’s EO – while not technically a Muslim ban — is extremely harsh, and unfair to multiple actors (including Iranians, Iraqi “collaborators” with the US military, Syrian refugees). It is already being drawn into a swamp infested with crossfire bureaucracy, multiple lawsuits and even possible civil rights violations.

© AP Photo / Saul Loeb/Pool
Obama's Wars and Trump's Order: US Protests 'Unjustified, Resemble an Orchestrated Show'
But the irrational seven-nation list is inherited from Obama. White House Chief of Staff Reince Priebus though has left open the possibility that Saudi Arabia, Egypt and Pakistan may be added to the list. No mention of Tunisia.

This list is yet another proof that the Global War on Terror (GWOT) is the gift that will keep on giving. The Cheney regime blew the Middle East apart; the Obama/Clinton continuum entertained the illusion of managing it; and Trump wants an easy way out. Iranian engineers, Iraqi interpreters, Syrian and Yemeni refugees, are all caught in the crossfire.

Meanwhile, GWOT will remain a pathetic parody as long as Wahhabi Saudi Arabia – the ideological matrix of Salafi-jihadism — is not dealt with for what it is: a huge, unaccountable, threatening danger zone.