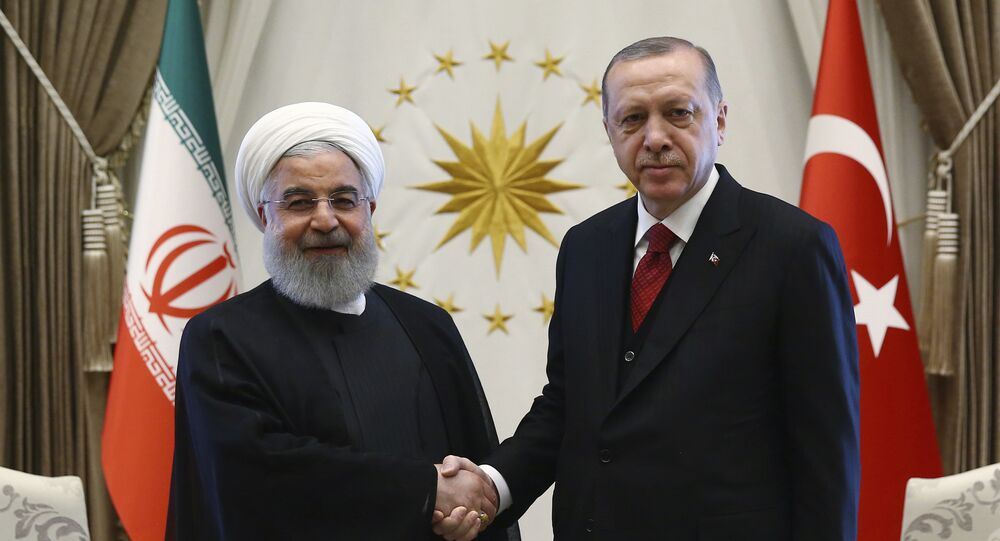 Tensions between Tehran, its trade partners and the US have spiked significantly since May, when President Donald Trump announced Washington's exit from the Iran nuclear deal, threatening the Islamic Republic with a new round of economic sanctions.

Ankara is unwilling to break up its strategic relationship with Tehran, the Turkish news website Yeni Safak has cited the country's President Recep Tayyip Erdogan as saying on Wednesday.

"Severing ties with our strategic global partners, who are just like the US to us, goes against our understanding of sovereignty. Iran is both our neighbor and our strategic partner. There are so many developments based on mutual benefit," Erdogan emphasized.

The statement came a day after Turkish Foreign Minister Mevlut Cavusoglu made it clear that Ankara will not join the possible new US sanctions against Iran.

"We had a US delegation here and we […] explained to them that we believe that [such moves] are a mistake. We do not have to adhere to the sanctions imposed on a country by another country," Cavusoglu stressed.

In late June, he announced that Turkey does not have to act in compliance with "unilateral" US decisions on Iran, in a sign that Ankara would not halt trade with its immediate neighbor and major oil supplier.

The remarks came in response to the White House's previous threats to slap penalties on Iran's trade partners if they don't cut off Iranian oil imports by November 4.

In mid-July, US Secretary of State Michael Pompeo pledged that Washington may consider granting relief to some countries from economic sanctions that will be imposed on Iran’s oil exports in early November.

© AFP 2020 / ATTA KENARE
Europe Loses $10 Bln Due to Export Cuts to Iran Amid Sanctions Threat – Envoy
Earlier, he delivered the 12-point ultimatum to Tehran and threatened to impose the "strongest sanctions in history" on Tehran, should it fail to comply with the demands.

On May 8, US President Donald Trump announced that Washington is withdrawing from the Joint Comprehensive Plan of Action (JCPOA), also known as the Iran nuclear deal.

Trump said that the US would re-impose the previously lifted sanctions on Iran, including secondary ones that target countries doing business with the Islamic Republic.