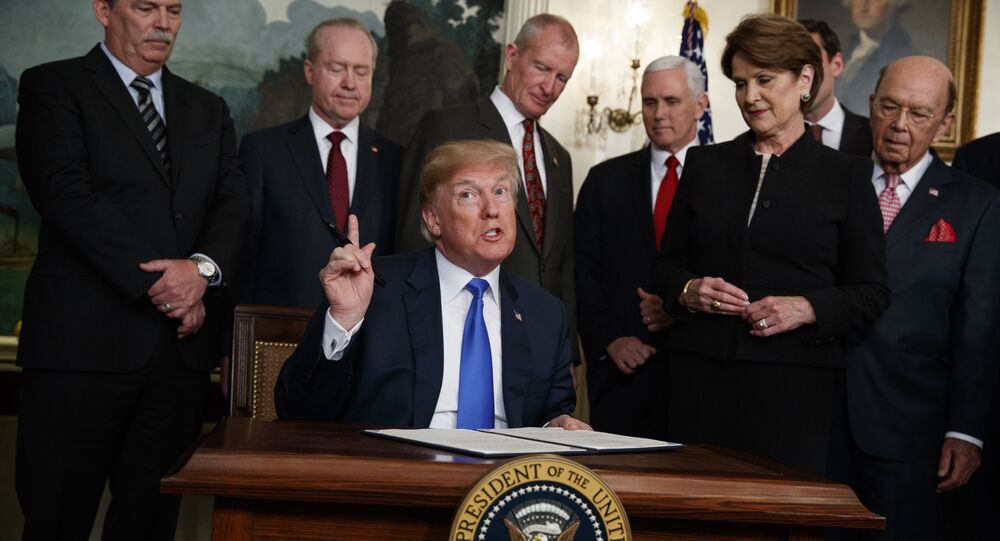 Just hours before the temporary exclusion for higher tariffs on EU steel and aluminum expire, Trump postpones the decision for a month. The tariff row has already put the transatlantic partner at the edge of a trade war, as the EU threatens to tax import from the US.

The US President has delayed the decision on imposing higher steel and aluminum tariffs for the EU, Canada and Mexico until June 1. These countries as well as Brazil, Australia and Argentina had enjoyed temporary exemptions, which were to expire by May 1.

The White House informed that it has “reached agreements in principle with Argentina, Australia, and Brazil with respect to steel and aluminum,” promising to finalize the details shortly, but stated that the negotiations with European countries as well as Mexico and Canada will carry on for another 30 days. By now, only South Korea, which agreed to cap its steel exports by 30%, can enjoy the permanent exemption that the EU and other countries strive for.

While the permanent exemption remained in question, the EU reacts with reserve, stating the EU Commission “takes note” of the decision and criticizing the US for destabilization. The EU expressed its willingness to discuss current market access issues, but stress that they “will not negotiate under threat.”

“The US decision prolongs market uncertainty, which is already affecting business decisions. The EU should be fully and permanently exempted from these measures, as they cannot be justified on the grounds of national security,” the statement reads, adding that “overcapacity in the steel and aluminum sectors does not originate in the EU.”

The decision was welcomed by the UK government spokesperson, who voiced commitment for further work, called a further exemption positive.

“We remain concerned about the impact of these tariffs on global trade and will continue to work with the EU on a multilateral solution to the global problem of overcapacity, as well as to manage the impact on domestic markets,” the statement read.

The German government said in an official statement, that Germany “still basically expects that the United States will provide a long-term exemption [from the new US tariffs for the European Union]."

It also stressed the importance of maintaining dialogue between the European Union and the United States on the issue, adding that the escalation of trade relations was neither in EU nor in US interests.

The tensions have been growing since March 23, when Donald Trump, reflecting upon his MAGA campaign concept, posed a 25% tariff on steel imports and 10% tax on aluminum, claiming to protect the US producers from unfair competition, foremost from Chinese enterprises, and boost national security.

This move sparked discontent among the key US trading partners, especially the EU, as trade between them totaled $1.1 trillion last year, higher than any other country’s share. The EU insists on a permanent exemption, but the US pushes its allies for concessions similar to South Korea's.

Brussels has taken a tough stance on the matter, as its chief officials claim that retaliatory measures inherent in a full-scale trade war would be taken if the EU isn't excluded from new protective tariffs. The EU has threatened to respond to the tariff, which could hit its $7.7 billion in exports to the US with taxes on US goods, such as steel, orange juice, jeans, whiskey and Harley-Davidson motorcycles, which account for $3.4 billion in exports.

While EU Trade Commissioner Cecilia Malmstroem dismissed any possibility of negotiations with the US until Europe is guaranteed an "unconditional and permanent" exemption from tariffs, some of the country’s officials offered to negotiate, fearing the consequences of a potential trade war. Just recently German Economics Minister Peter Altmaier told the German broadcaster ARD that Europe should put an offer for the US on the table.

The trade issues became one of the topics of the talks between Donald Trump and Angela Merkel, as the German Chancellor visited the White House last week right after France’s President Emanuel Macron departed. It remained unclear if the US plans to grant the permanent exclusion, as Trump repeated his claim that the US and Germany “need a reciprocal relationship, which we don't have” in the final press conference.