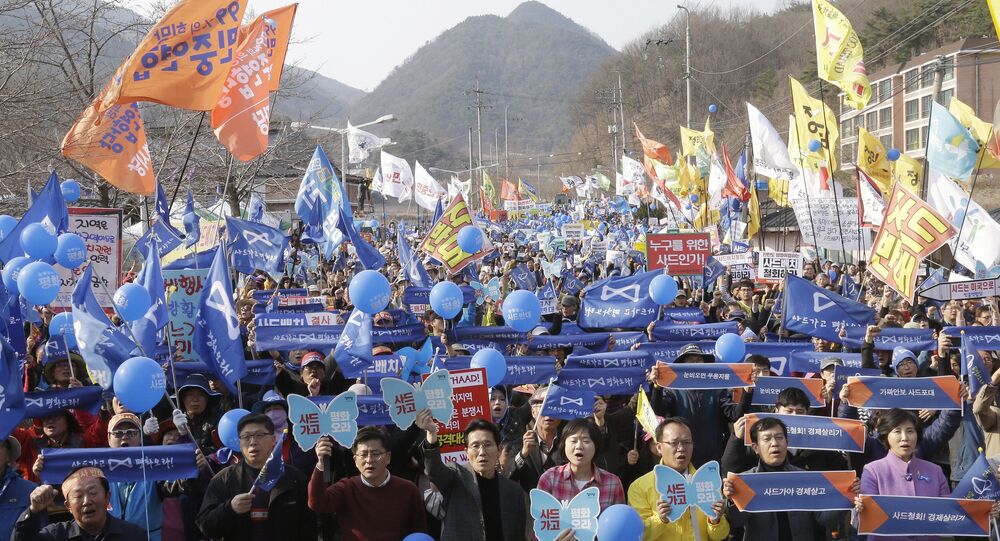 Over the weekend, hundreds of South Korean protesters stationed themselves along a road to the golf club on which the powerful US Terminal High Altitude Area Defense (THAAD) anti-missile system is based.

According to South China Morning Post, the Lotte Skyhill Seongju Country Club in North Gyeongsang Province of South Korea on Saturday played host to more than just weekend golfers, as protesters descended on an access road demanding the removal of the US missile system.

"Koreans hate THAAD and war!" reads one banner at the protest site, which is beginning to look more like an encampment.

"Stop THAAD and give peace back to us," reads another, as well as one that simply states: "Stop US militarism in Asia & Pacific," according to SCMP.

An estimated 8,000 police were deployed to the construction site to ensure that military truck convoys would be able to deliver THAAD components. The installation of the system began under cover of night in late April, infuriating local residents.

At least a dozen protesters — including a few who are very old — were injured in ongoing confrontations with police.

"Just suddenly one day, Seongju has become the frontline," claimed a local farmer, cited by CNBC.com.

"Wars today aren't just fought with guns," the farmer continued, adding, "Missiles will be flying and where would they aim first? Right here, where the THAAD radar is."

One Seoul-based activist claimed that many would remain at the protest site for a set period, after which another group would take their place.

"We will persist," the activist said, according to the SCMP. "We could still pressure them to reduce the size or delay the operation."

The protester claimed, "After last week's incident, they had to deliver some components using helicopters instead."

North Gyeongsang is observed as being the area where the family of recently-fired president Park Geun-hye, a strong ally of THAAD, is based.

The deployment of the THAAD system has raised concerns in the country and the region. Washington and the government in Seoul claim that THAAD serves to deter the threat posed by North Korean ballistic missile launches.

But officials in China and Russia have noted that, although touted as a missile-defense system, THAAD is placed in such a way that it could offensively strike strategic targets within both countries.

As reported by Sputnik, the deployment of THAAD is seen as an unnecessarily combative move by the US to use high-tech weaponry as a means to not only encircle China, but also as a counter to what Washington considers to be Russian aggression.

US President Donald Trump has increased tensions in the region following his suggestion last week that South Korea must pay the cost of the $1 billion THAAD system.