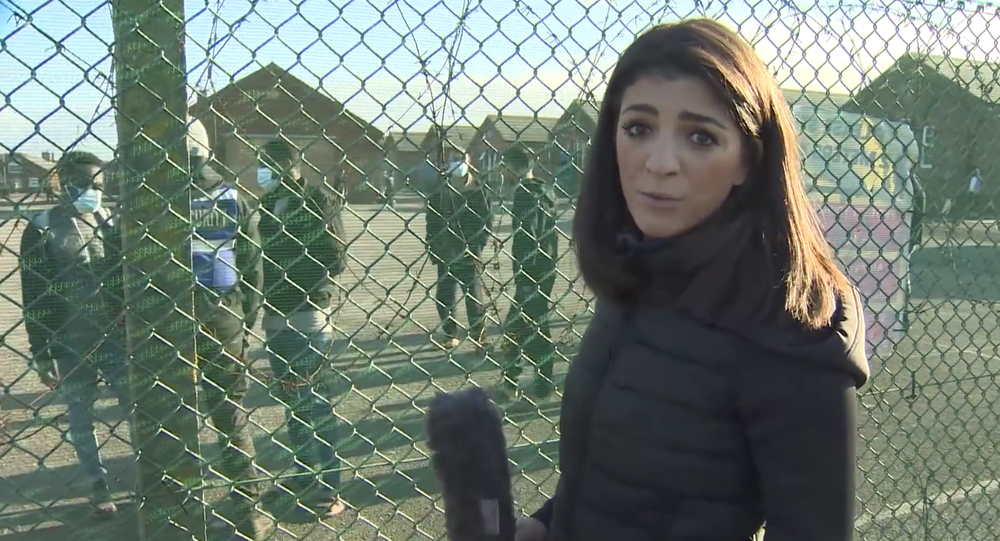 Shadia Edwards-Dashti, a journalist and documentary filmmaker, has reported on overcrowding and mistreatment at Napier Barracks, a facility used by the UK government to accommodate hundreds of asylum seekers.

In an interview with Sputnik, Shadia Edwards-Dashti talks about her latest documentary “Napier Barracks| Asylum seekers reach boiling point.” During filming she uncovered people living in inhumane conditions and suffering from PTSD, while security guards banned them from speaking out about their plight.

Sputnik: Who exactly is being kept at Napier Baracks and why?

Many of these places are war torn, subject to extreme poverty, political oppression and persecution. In this context though, it’s important to remember the UK’s imperialistic role in many of these countries' conflicts. Yet the UK doesn't seem to want to deal with some of the direct consequences of its own foreign policy.

Instead Britain shows asylum seekers little sympathy and has shacked them up in halls with no social distancing and inadequate healthcare. Not to mention that the setting of a cramped military barracks is triggering for some of these men, who are suffering from mental health issues like PTSD, severe depression and suicidal tendencies.

The majority of men at the barracks fled to the UK, supposedly a safe haven, but what they are experiencing now at Napier Barracks, isn't far off the dire circumstances they escaped.

Sputnik: What did you discover when you went to Napier Baracks?

Shadia Edwards-Dashti: The first thing that came to my mind when I got to the barracks were the horrific scenes we saw on the American border during Trump’s presidency, locking human beings of all ages in cages. But we are in Kent. In the supposedly civilised United Kingdom. Yet asylum seekers here are shut off from the rest of the world, behind barbed wire and a guarded fence.

The Home Office says ‘they aren't criminals and they're not being detained’, but that isn't what it looked like. And, within minutes of being around the facility, a man began gesturing for help. It was like an emergency situation was unfolding before our very eyes and we only just arrived. People inside are literally desperate to get out. But the security inside were doing all they could to prevent asylum seekers from speaking to me. In some cases, forcibly moving them away from the fence where I was on the other side.

As the day continued, such episodes of people telling me and my team they were in need of desperate help became more frequent. Numerous people staying in the barracks told me of the prison-like conditions behind the fence and basic human rights of dignity being denied. Hygiene was a big issue; the sanitary conditions were far from adequate as was the bedding situation. There is limited free movement in and out of the barracks too as those inside are only allowed to leave once a day for two hours.

They told me the food was barely edible. The rooms were cramped with apparently 30 to a room, despite being in the heights of a nationwide COVID-19 lockdown, and to maintain any privacy they used their only bed sheet as room dividers. Their beds are infested with bugs.

Sputnik: Describe what you saw in the footage taken inside Napier Baracks.

Shadia Edwards-Dashti: The men inside have taken to extreme measures to resist the conditions - including hunger striking and protests. There have also been reports of self-harm and attempted suicide. It was footage documenting all these claims that prompted me to visit the barracks myself.

Footage included the protests themselves, fights breaking out with security, countless displays of substandard conditions including the one toilet shared among over 30 men. But most shocking of all was blood on the floor and beds, allegedly from self-harming incidents.

That was when my team and I decided we couldn't sit back and watch, and we had to go and investigate.

Sputnik: How were you able to speak to some of the asylum seekers? Are they allowed to leave Napier Baracks?

Shadia Edwards-Dashti: The home office has been cracking down on asylum seekers like these speaking to people like us. While the asylum seekers are within the walls of the barracks, security does whatever it can to stop them from speaking to people on the other side. However, during the two hours per day they are allowed outside, there isn't much security can do to stop them. We spoke to several brave asylum seekers who were desperate to get their story out. However, several did tell us that if they were seen, they'd likely be questioned about it by security upon their return to the barracks.

Sputnik: Has the Home Office responded to these claims of unfairness in the treatment of these asylum seekers?

Shadia Edwards-Dashti: The Home Office refutes all these claims entirely.

Sputnik: Explain the ‘gagging clause’ imposed by the Home Office onto people who visit the asylum seeker accommodation centre at Napier Baracks.

Shadia Edwards-Dashti: Chilling reports of prison-like conditions inside the barracks have been trickling out from this facility. It would seem that the reason the reports are coming out in dribs and drabs is is due to what’s being described as a Home Office ‘cover up’.

The Home Office introduced a gagging clause in the form of a confidentiality waiver essentially silencing visitors from speaking out about what they see inside the barracks.

Volunteers providing donations of clothing, essential items and food have been hit with the form, which is shockingly underpinned by the Official Secrets Act, by the private firm (Clearsprings Ready Homes) running this place on behalf of the Home Office.

But obviously there’s huge criticism about this because the Official Secrets Act is designed principally to protect matters of national security. And even more worryingly keeps any secrets that may be behind these closed doors locked away.

While I was visiting, I met with Adam Yassir, who is a refugee himself from Sudan. He now runs a charity delivering donations to asylum seekers across the UK. He has been running his services at Napier Barracks since asylum seekers began staying there in September. After a few attempts of getting vital things like clothes and food into the barracks he told me he is now banned.

Every week he goes to the barracks and every week his entry is denied. He now has no other choice but to set up in the park nearby for asylum seekers to come and help themselves. After around 30 minutes of laying out his donations, the police arrived. They told us they were called to an incident.

We tried to challenge the police on this asking what kind of incident this was?

‘Man hands out clothes to the vulnerable...’ but they dodged our questions.

They eventually left, because of course there was no crime. Adam shouldn’t be subjected to treatment like this, he should be awarded a badge of honour.

Sputnik: Why do you think these people are being kept in such conditions, given the amount of resources available to the UK government?

Shadia Edwards-Dashti: As the migrant crisis escalated again this year with over 8,000 people making the perilous journey across the English Channel by boat, the UK government ramped up their rhetoric. Staying true to her words of making the route ‘unviable’, Home Secretary Priti Patel and her French counterpart have agreed on a pact to block off the passage entirely.

The two governments say it will reduce the incentive for people to make the crossing but doing so only makes the journey all the more dangerous.