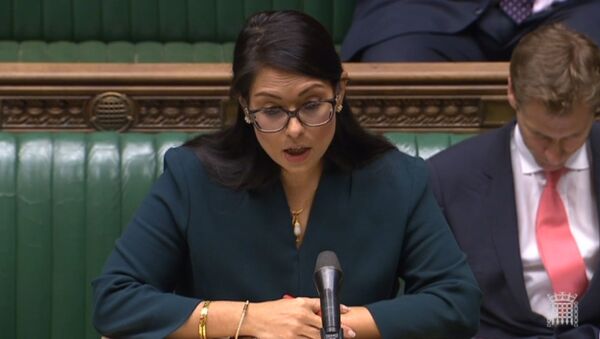 The home secretary said the UK was waiting to return some 1,000 migrants to the European Union states where they first arrived under the terms of the Dublin Regulation, but those countries have put up "legal barriers".

Patel, quoted by The Daily Express, said EU members were putting up "legal barriers" to enforcement of the 1990 Dublin Regulation - meant to ensure asylum seekers claim refuge in the first country they arrive in.

"We have EU states themselves not following the European Union's Dublin Regulation and not taking back people who have been deemed to be found coming through those countries in the first place." Patel said in a video message to the Blue Collar Conservatism conference in Keighley, near Leeds in West Yorkshire.

All 'irregular arrivals'  over the age of 14 including illegal immigrants, along with those seeking asylum, are meant to have their fingerprints taken and stored on the Eurodac database. The database can help track their movements across the continent and prevent 'asylum shopping', travelling through member countries to those where refugees believe they will enjoy a better life.

EU Commission Abandons Refugee Quotas in Bid to Appease Eastern States
"This year alone, so far, we've returned 210 people, we have 1,000 people of whom we have Eurodac information, where we're actively working with European countries to return them," Patel said.

"But, of course, there are endless legal barriers," she said. "For example, other EU member states are not proactive when it comes to responding to our requests to remove people under the Dublin Regulation."

This summer saw thousands of migrants from Africa and the Middle East trafficked across the English Channel in dangerously-overloaded small boats. Would-be asylum seekers have gathered in squatter camps in north-west France that began to spring up more than a decade ago.

Patel has vowed to deport those arriving by sea on the basis that they should have applied for asylum or refugee status at their first port of call.

Patel came under attack on Tuesday after it was reported she had asked officials to consider building an asylum reception centre on the South Atlantic island of Ascension, a British Overseas Territory but not part of the UK. Some called Patel a hypocrite, as her parents had emigrated from India to Uganda in the 1950s and then to the UK in the 1960s.

An article in the Indian Express last year quoted the Conservative MP's cousin Kiran Patel, who implied that her family was expelled by Ugandan President Idi Amin Dada, saying: "We were all born in Kampala and grew up there until the Amin regime expelled us.” However, Patel was born in London in March 1972, five months before Idi Amin launched his expulsion of tens of thousands of Indian-descended people in August that year.