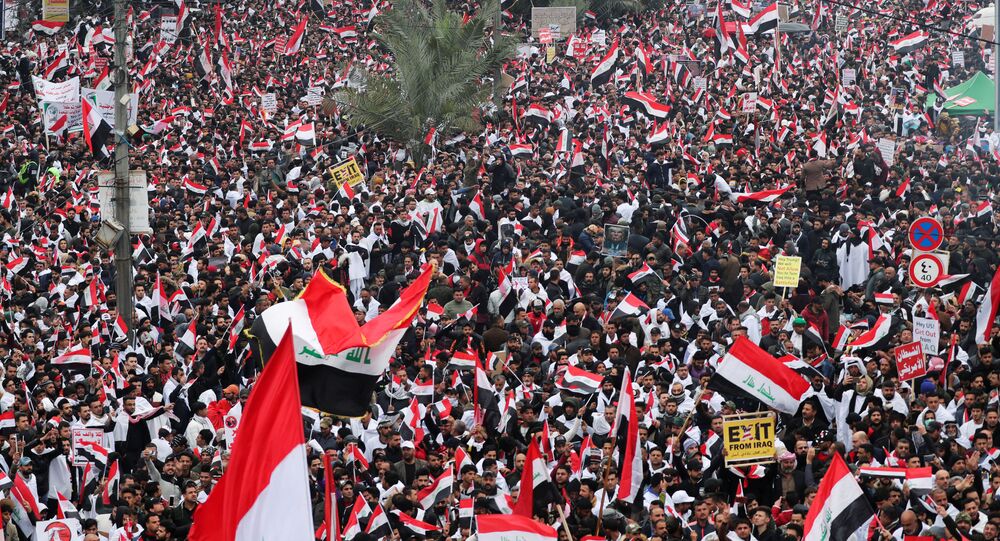 Close to one million Iraqis assembled Friday to protest US troops’ presence in their country following the Iraqi parliament’s vote to expel them. While demonstrations in the past have been blown off as Iran-backed exhibitions, one anti-war expert tells Sputnik that this particular protest sends a clear message to Washington.

Medea Benjamin, cofounder of the peace group Code Pink, joined Radio Sputnik’s Loud and Clear on Friday to discuss the protests in Iraq and the global anti-war protests that are scheduled for this weekend.

Benjamin told hosts Brian Becker and John Kiriakou that it is clear that these recent protests are directed at Washington and cannot be be misconstrued as demonstrations led by Iran because they were organized by “Shia Iraqis who want to see their country free of foreign troops.”

“There is genuine popular sentiment that the US troops represent a danger to the Iraqi people, that they’ve brought nothing but misery for almost two decades now. And the latest killing of [Islamic Revolutionary Guard Corps Quds Force commander General Qasem] Soleimani on their soil makes it very clear to Iraqis that they will be the victims of an escalation by the Trump administration on Iran, and [Iraqis] don’t want it,” she argued.

Benjamin noted that the US’ refusal to adhere to the Iraqi parliament’s call for American troops to exit may escalate tensions even further in the region. In fact, she said, there were English-language signs seen during the protests which had messages along the lines of “bring your sons home from Iraq or start preparing their coffins.”

“There will be attacks on US soldiers coming from Iraqis who have expressed their desire very clearly,” Benjamin warned.

However, it's unlikely that US President Donald Trump’s administration will respect the Iraqi government’s sovereignty and remove American service members

“US sanctions have brought the countries closer together economically,” Benjamin argued. Nevertheless, Washington continues to spout that it wants to rid Iraq of Iranian influence, when it is Iraqis that are calling for the US to remove its troops from the region.

This is the absolutely enormous rally in Iraq's capital Baghdad today, where more than 1 MILLION protesters demanded an end to the US military occupation of their country

Iraq's parliament voted 170-0 to expel US troops. Trump refused to listen. Now the people are in the streets pic.twitter.com/FDnHQrmCTu

“Since 2003, the US has imposed a government on Iraq that has done nothing for the Iraqi people. They are poor, the young people don’t have opportunities, the jobs don’t pay enough, and yet this is an oil-rich country where the US has poured billions of dollars,” she said. “The Iraqi people see through that and recognize that being occupied by a rich country like the United States has only brought them misery.”

As a show of solidarity with those in the Middle East, Code Pink and a number of additional organizations have scheduled anti-war protests in over 200 locations around the world as part of their “International Day of Action: No War With Iran” event on January 25.

“It’ll be a great day to show our opposition to the Trump administration’s escalation of the conflict and to say no to a war with Iran and no to sanctions and no to the US troops. So we have to echo what the Iraqis are saying and say that same thing here at home,” Benjamin emphasized.