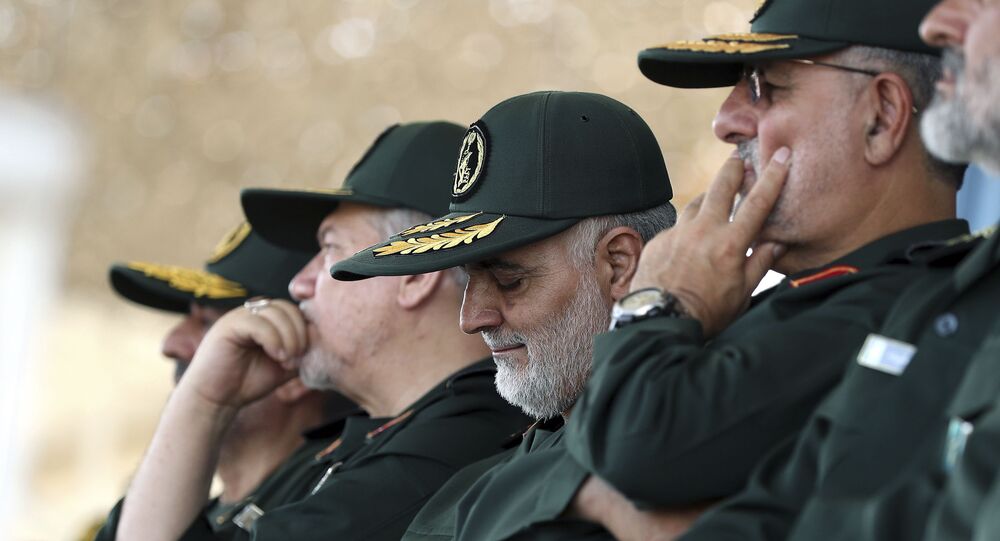 The assassination of Quds chief Qasem Soleimani caused a public outcry in Iran with the people of the Islamic Republic urging Tehran to avenge his death. A US military veteran, an ex-CIA analyst and a Mid-East expert have outlined Iran's possible options for retaliation and described the risks of escalation.

On 3 January, Qasem Soleimani, an Iranian major general in the Islamic Revolutionary Guard Corps (IRGC) and commander of Quds Force, was killed in a targeted US drone strike along with Abu Mahdi al-Muhandis, deputy commander of the Popular Mobilisation Forces (PMF) an umbrella organisation composed of some 40 predominantly Shiite militias.

"Soleimani was plotting imminent and sinister attacks on American diplomats and military personnel, but we caught him in the act and terminated him", President Donald Trump said at Mar-a-Lago later in the day, citing no evidence to back the assumption.

In response to Washington's claim, Iranian Foreign Minister Javad Zarif drew attention to Soleimani's huge role in bashing Daesh (ISIS/ISIL)*, Al-Nusra Front* and al-Qaeda* in the region and denounced the killing of the Quds chief as an "act of international terrorism", as well as an "extremely dangerous and foolish escalation".

​'Iran Will Have to Retaliate' for Soleimani's Death

Following the US drone strike that claimed Soleimani's life Tehran vowed to "retaliate" prompting Washington to dispatch 3,000 US troops to the Middle East. Bracing for blowback, the State Department urged US civilians located in Iraq to leave the country immediately.

"Iran will have to retaliate against the US", says Mark Sleboda, a US military veteran and international affairs and security analyst. "One, because of the damage to their country and their sovereignty. Qasem Soleimani was not only a revered and successful military leader but he was also an extremely effective diplomat for Iran and an extremely charismatic figure to the domestic population. It is widely speculated that because of his close relationship with Iran's Supreme Leader Ayatollah Khamenei that he was basically shortlisted as a future presidential pick for the country".

According to the analyst, there is a great public outcry in Iran over the Quds leader death, and even if Tehran wanted to try to deescalate tensions the people of Iran will demand some type of action.

"That does not mean that this action will be immediate nor does it dictate the form that it will take," he says, presuming that at this point Iran will not resort to overt and open war with the US. "This assassination is certainly a game changer, it ups the level of the asymmetric, hybrid and covert war that has been going on between the US, the Saudis and Israel [on the one side] and Iran [on the other side] for decades".

Sleboda outlines that possible ways of retaliation could be asymmetric presumably involving Hezbollah in Lebanon, Hamas in Palestine and the Popular Mobilisation Forces (PMF) and associated political movements in Iraq.

"This spread of forces throughout the region that have some degree of association with Iran and personal loyalty to Qasem Soleimani that Iran's allies may very well use to strike against the US", the military veteran elaborates, stressing that there are lots of US military bases and diplomatic embassies in the Middle Eastern region which could become possible targets.

There also remains a capability to attack countries and infrastructure of the US allies, like Israel and Saudi Arabia and, apart from this, Tehran may follow Washington's lead and resort to targeted assassinations of US politicians and military officials, says Sleboda.

© AFP 2020 / MAHMUD HAMS
Palestinians in Gaza City burn a US and an Israeli flag during a mourning ceremony organised in honour of slain Iranian military commander Qasem Soleimani (portrait on banner) killed in a US air strike a day earlier, on January 4, 2020.

US Has Sought to Kill Soleimani for Quite a White

According to Sleboda, Washington's attempts to justify the extraterritorial targeted assassination of the Quds commander by "self-defence" appears rather clumsy.

"[They claim that] they have some knowledge that they have not divulged that Qasem was imminently planning some attack that would have killed Americans somewhere in the Middle East", the security analyst says. "They have provided no evidence to that effect, no details, whatsoever. That is also not the way that self-defence as enshrined in the UN Charter actually works, the requirements are quite stringent although the phrase 'self-defence' is often used inappropriately by the US and other countries to justify preemptive attacks. And they also claim that they did it to avert future attacks organised against US troops in the Middle East, again by Soleimani".

However, the reality is that the US had been planning to take action against Qasem Soleimani for some time, Sleboda emphasises citing, in particular, former National Security Adviser John Bolton's tweet saying the plot was "long in the making".

​"And we know that previous administrations, including Obama, had also considered assassinating [Soleimani] as well and that's principally because he resisted US interests usually in the form of military aggression and covert operations around the Middle East and he resisted them quite effectively," the US military veteran said.

Killing of Soleimani May be Part of Broader Regime Change Plan

Further citing Bolton's 3 January tweet, Sleboda does not rule out that the killing of Soleimani is part of a broader plan to foment a regime change in the Islamic Republic and that the Quds chief is not the last Iranian top official Washington is going to eliminate.

Larry Johnson, a former CIA analyst shares Sleboda's concerns that the US may have planned to hit Iranian strongmen one by one in order to undermine the country's government.

"Yes, I believe that the Trump administration is calculating that hitting key Iranian targets, like Soleimani, will bolster the opposition in Iran to the Mullahs and pave the way for regime change", he says. "A foolish hope in my view. As I noted in my article, I think this attack will have the opposite effect of strengthening support for the current regime".

According to Johnson, "more attacks [on the part of the Pentagon] are likely": "Those will further enrage the Iranians and will increase the risk of retaliatory acts that could escalate this into a full blown war," he warns.

For his part, Canadian political analyst of Syrian descent Christian Assad  emphasises that "the targeted assassination of Soleimani is a clear declaration of war and the total destruction of Joint Comprehensive Plan of Action (JCPOA)".

"The US, with the help of Israel and other allies, has been provoking Iran and the Iraqi resistance for a long time. The tensions present and past are the sole responsibility of the US government(s) since the removal of the Shah of Iran in 1979," he says.

According to Assad, "it remains to be seen if China, Russia and others can apply enough pressure on the US to cool its heels."

Is the US on the Brink of War With Iran? US Airstrike Kills Top Iranian General