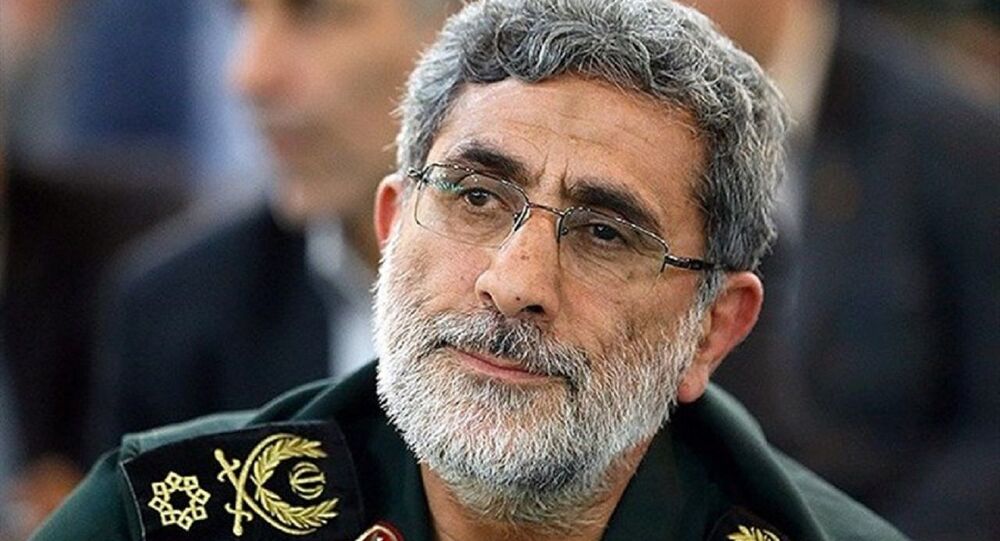 Esmail Ghaani was named the new head of Iran’s Islamic Revolutionary Guard Corps’ foreign operations branch, the Quds Force, shortly after its head General Qasem Soleimani was killed in a US airstrike early on 3 January.

“We tell everyone, be patient, and you will see the bodies of Americans all over the Middle East,” Ghaani was quoted by Al-Jazeera as saying on Saturday.

The statement comes after Iran’s Ambassador to the UN Majid Takht Ravanchi called on the UN Security Council to condemn what he described as “a criminal act” of “state terrorism” by the United States, something that Ravanchi said resulted in “the horrific assassination” of Soleimani.

Ravanchi underscored Soleimani’s “significant role” in helping a number of countries to fight and defeat “the most dangerous terrorist groups”, including Daesh*.

According to him, the US airstrike that killed Soleimani “clearly invalidates the claim of the United States that it is fighting terrorism”.

The remarks were preceded by US National Security Advisor Robert O’Brien, who called Tehran’s potential retaliation against Soleimani’s killing a “very poor decision”.

This came after Iran’s Supreme Leader Ayatollah Ali Khamenei named Ghaani as Soleimani’s successor, touting the Quds Force deputy as one of the “most decorated commanders” of the IRGC during the 1980-1988 Iran-Iraq war.

Soleimani was killed on 3 January, when the US military conducted an airstrike on the Iraqi capital Baghdad which the Pentagon said had been authorised by President Donald Trump and “aimed at deterring future Iranian attack plans”.

The airstrike came as the situation in Iraq escalated on 31 December after Shia protesters tried to storm the gates of the US Embassy in Baghdad following airstrikes on an Iran-backed unit of Kataib Hezbollah operating in the country.

US House Foreign Affairs Committee Chairman Eliot Engel, in turn, said that the 3 January strike “went forward with no notification or consultation with Congress”.

Describing Soleimani as “the mastermind of immense violence”, Engel at the same time pointed out that “to push ahead with an action of this gravity without involving Congress raises serious legal problems and is an affront to Congress's powers as a coequal branch of government.”

Iranian Foreign Minister Mohammad Javad Zarif, for his part, condemned the killing of Soleimani as an “act of international terrorism”, adding that “the US bears responsibility for all consequences of its rogue adventurism”.

He was echoed by Ayatollah Ali Khamenei, who warned that “a harsh retaliation is waiting” and that “all enemies should know that the jihad of resistance will continue with a doubled motivation, and a definite victory awaits the fighters in the holy war.”