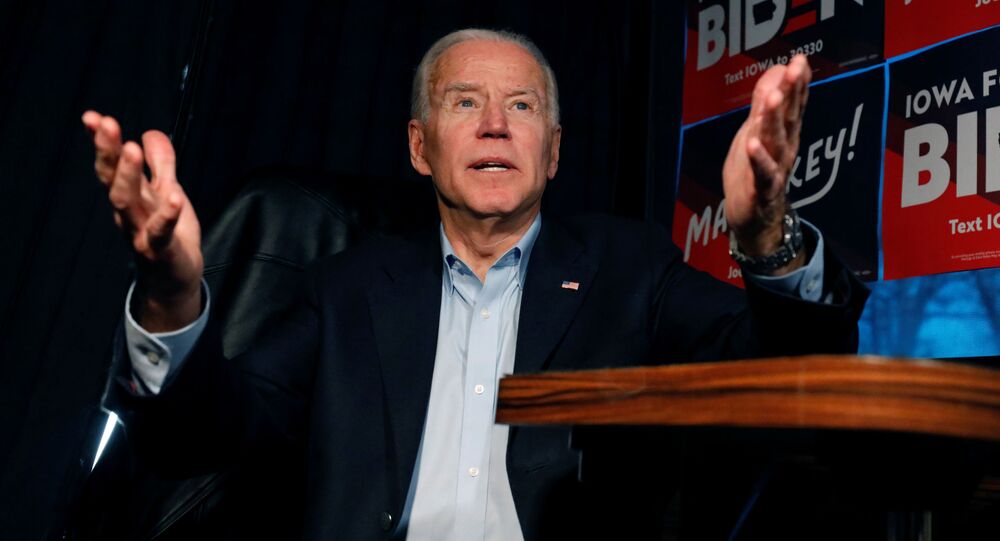 Though House Democrats announced Tuesday they would be proceeding with articles of impeachment against US President Donald Trump, one journalist argues not will the process come to a slowing halt in the Senate, but may also result in hearings that could further damage former Vice President Joe Biden’s 2020 presidential campaign.

Award-winning journalist and editorial cartoonist Ted Rall joined Radio Sputnik’s Loud and Clear on Tuesday to discuss the matter and explain why Democrats and one particular frontrunner may receive some blowback from the impeachment hearings in the near future.

Rall told hosts Brian Becker and John Kiriakou that while it's clear the Democrat-led House of Representatives will vote to impeach Trump, “the mystery at this point is: how are the Republicans going to handle this in the Senate?”

Many, including Rall, also predict the Senate, which is made up of 53 Republicans, 45 Democrats and two Independents, will ultimately vote against removing Trump from office.

“I’m wondering if [Senate Republicans are] going to choose to drag this out so it distracts from the Democratic primary process … or whether they’ll just, very quickly, schedule the trial, vote against it and move on,” he said, noting he suspected it would “probably go a little longer than one might expect.”

He went on to point out that there are possible benefits to both strategies. Though there’s an argument to be made that a sitting president would benefit from an optics standpoint by not having an impeachment inquiry over their head while campaigning for the 2020 presidential election, Rall pointed out that extending the process would distract Senators Bernie Sanders, Elizabeth Warren, Cory Booker, Amy Klobuchar and Michael Bennet, all of whom are Democratic presidential candidates.

Such a strategy by Senate Republicans would also present the Democratic presidential candidates in the Senate “as extremists” who are “voting for an impeachment that, frankly, doesn’t have broad-based support in the polls,” he explained. “I think the Republicans are looking forward to make the Democrats squirm and gather some video for the attack ads of the general election.”

Trump’s future aside, Biden was recently interviewed by NPR’s Rachel Martin and asked if he would comply with a subpoena if called to testify by Senate Republicans during pending impeachment hearings in the chamber - a move previously attempted by Republican lawmakers from the House Judiciary Committee.

“No, I will not yield to what everyone is looking for here - and that’s to take the eye off the ball,” the former vice president told Martin. “Everybody knows the issue here is not what I did, because no one has [produced] one centile of evidence that I did anything other than do my job for America as well as anybody could have done it. Making sure that we, in fact, that we got rid of a corrupt prosecutor who everybody … including our allies and the IMF [International Monetary Fund] and everyone else said has to go.”

Joe Biden is dismissing calls from President Trump and his allies for his testimony during an impeachment trial in the Senate.

“This is a Trump gambit he plays,” he told NPR. “Whenever he’s in trouble he tries to find someone else to divert attention to.” https://t.co/vyk1kzLrjQ pic.twitter.com/DY5k4eZuUc

He went on to say that “no one warned” him of the “potential conflict of interest” and optics of his son, Hunter Biden, serving on the board of Ukrainian energy company Burisma Holdings.

Rall explained that he imagines Biden and his team will attempt to cite the fact that top Trump administration officials, such as Secretary of State Mike Pompeo, have also refused to comply with congressional subpoenas in order to justify Biden doing the same thing.

“That’s just not how moral high ground works,” he asserted, also highlighting that Biden’s entire campaign was launched as a so-called battle for the soul of America and a return to normalcy.

“You don’t get that if he acts like Donald Trump,” Rall concluded.