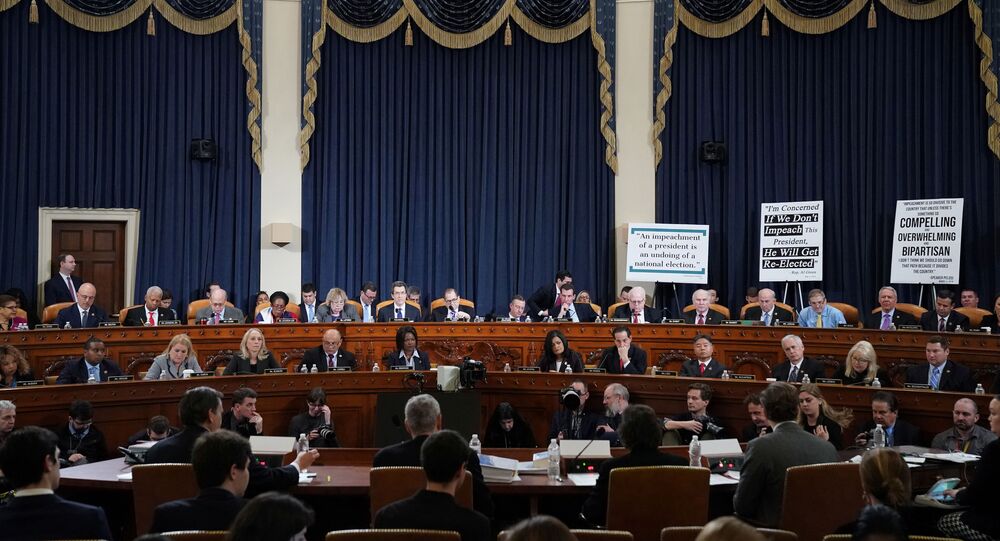 The Democrats’ impeachment inquiry into US President Donald Trump shows they want to remove him from office by any possible means at their disposal, Daniel Lazare, a journalist and author of three books - “The Frozen Republic,” “The Velvet Coup” and “America's Undeclared War” - told Radio Sputnik’s Loud & Clear Monday.

The House Judiciary Committee began its first public hearings on the impeachment inquiry investigation into Trump last week, releasing a report on Saturday elaborating the constitutional grounds for impeaching Trump over alleged abuse of power and obstruction of justice. The House could vote on articles of impeachment before the Christmas break begins; if so, the trial would be conducted by the US Senate.

The House Intelligence, Judiciary, Foreign Affairs and Oversight and Reform Committees are conducting an investigation into a July 25 phone call between Trump and Ukrainian President Volodymyr Zelenskyy.

House Democrats have alleged that Trump sought an illegal "quid pro quo" from Kiev by withholding military aid to pressure the country into opening an investigation into former US Vice President Joe Biden and his son Hunter’s business dealings regarding Ukrainian energy company Burisma Holdings. Trump has accused Biden of using his political influence to fire Viktor Shokin, then the Ukrainian Prosecutor General, who was conducting an anti-corruption probe of Burisma. Hunter Biden sat on Burisma’s board at that time.

“I think one big problem with the Democrats’ case is the idea that by asking for an investigation into Burisma [regarding the firing of Shokin in 2016], Trump was clearly trying to reap some kind of political benefit, and so therefore, that is an impeachable offense. What’s missing there is that there was a legitimate public interest in investigating those questions. So, yes, Trump is trying to reap a personal benefit, but there’s also a public interest,” Lazare told host John Kiriakou.

In an interview with NPR published on Monday, Biden told Morning Edition host Rachel Martin that he would not comply with a potential US Senate subpoena during Trump’s possible impeachment trial.

"No, I will not yield to what everybody is looking for here," Biden said. "And that is to take the eye off the ball."

The notion that Biden would just ignore a subpoena issued by the Senate is “outrageous,” Lazare noted.

“It’s impossible. It shows what’s going to happen in a very short period of time … the Democrats have just finished lambasting Trump for stonewalling these subpoenas and trying to block them on grounds of executive privilege. But Biden wouldn't even have that excuse, because he’s not in the executive office anymore. The Democrats will be on the defensive,” Lazare noted.

“If you listen to the NPR interview, it just shows Biden as a kind of pathetic, out-of-touch guy who really has no idea what is going on … his actions in Ukraine were highly troublesome,” he added.

“Does anyone out there really doubt that this is a Democratic Party effort to remove Trump for political reasons? Clearly, the Democrats are trying to use every weapon at their disposal to get rid of this guy who they loathe. Clearly, this is a political effort, and clearly it shows how explosive the partisan warfare on Capitol Hill has become over the last 20 to 30 years. The two parties are going at each other … with every available weapon at their disposal, and they will do anything, anything to get the other side. And impeachment is clearly just another chapter in that long-running novel,” Lazare added.