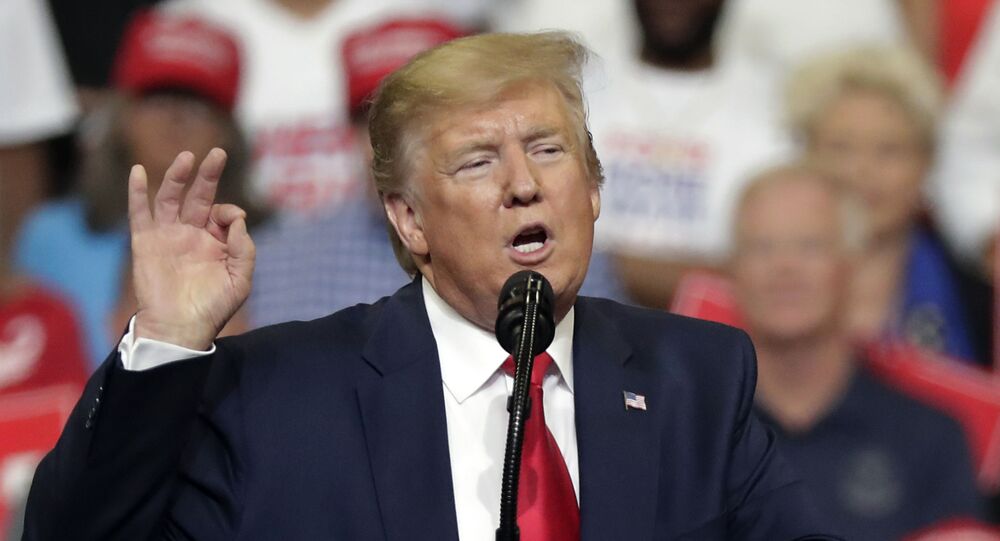 US President Donald Trump announced his "deal of the century", a peace plan to resolve the Israeli-Palestinian conflict, back in 2017, but his initiative was met with scepticism by Palestinians, who claim that Washington has discredited itself as a mediator due to an alleged bias towards Israel.

The White House recently unveiled the economic part of Trump's "deal of the century" peace plan, featuring $50 billion in investments for the Palestinian Authority over 10 years. Washington claims that if the Palestinians choose to follow the plan, they will be able to "achieve prosperity" for themselves. However, the "peace" part of this plan remains a mystery since the US stopped short of revealing what political steps the Palestinians will have to make to receive those investments, not to say what political gains they will get along with them, if any.

Although releasing the economic part of the "deal of the century" without a political one might seem weird and ineffective, Benny Miller, Professor of International Relations, School of Political Sciences, at the University of Haifa, believes there is a logic behind Trump's economic proposal for the Palestinian Authority. The professor indicates that such major financial help was offered in the plan in a bid to supress Palestinians' "nationalist sentiments" such as striving for sovereignty and statehood.

"If you offer to the weaker side a lot of money, economic logic and so on it can compensate for limited political nationalist gains. Like having a state and territory and this stuff", he said.

Miller, however, noted that unfortunately Trump's logic is flawed and that by trying to mute nationalist sentiments with money, the US might in fact insult the Palestinians, making them believe that Washington thinks of them as an "inferior race", who can be satisfied with mere economic gains.

"Obviously, people privately might prefer economic incentives on nationalist goals, but as a collective, for the political leadership, for a broad audience that wouldn’t be sufficient and moreover it would be humiliating", the professor elaborated.

A perceived attempt to silence Palestinian protests with money instead of offering them a political solution indicates one of the main problems with Trump's plan, Eyal Zisser, Vice Rector of Tel Aviv University and Professor for Middle Eastern Studies said. The professor insists that the US sees the conflict between the Israelis and Palestinians incorrectly and out of context.

"The problem with the Americans is that they look at the conflict, it’s a long historical conflict, and they look at it as a conflict between businessmen in the United States that you can settle with a better offer. This is not the case, unfortunately, a better offer will not help us in this context", Zisser said.

Both Zisser and Miller stressed that Trump's economic initiatives for the Palestinian Authority will mean little, unless he comes up with a political agreement that satisfies both sides and ends armed confrontation.

Zisser stressed that the Israeli-Palestinian conflict clearly needs a political solution first to "calm the region" and only then can attempts to boost the economy of the Palestinian Authority be undertaken, adding that without a political agreement "nothing will happen on the ground". Miller echoed his colleague's statements, saying that the Palestinians need to satisfy their "basic nationalist goals" first, before they can be tempted by economic benefits.

© AP Photo / Adel Hana
Protesters wave their national flags while others burn tires near the fence of Gaza Strip border with Israel during a protest east of Gaza City, Friday, Nov. 9, 2018

The Trump plan teaser however does contain one point, which is politically important for both sides of the conflict – the construction of a high-speed transport line that will join the West Bank and the Gaza Strip. Miller noted that such a line is crucial for the Palestinians, but may scare Israel, who is likely to oppose it due to security concerns.

"I think Netanyahu will wait for the Palestinians to say no first then he can appear as supposedly not rejecting Trump, his big ally. So as it looks now, it is not very promising, unless there is something surprising regarding a response to nationalist feelings in the political dimension", Miller said.

Possible Funding Issues With the Plan

The US expects the Arab states to bear the lion’s share of the economic burden of its peace plan, funnelling money not only to the Palestinian Authority, but also to its neighbours - Jordan and Egypt. The plan suggests providing the Palestinians with grants and low-interest loans, but also mulls attracting around $11 billion from private investors.

However, both professors believe that Trump's economic plan might stumble upon various issues. Zisser namely suggested that some Middle Eastern states might refuse to participate, feeling that a monetary incentive is not something that the Palestinians are seeking.

Benny Miller is more optimistic about the prospects of some Middle Eastern countries donating to Trump's cause, but not because they have faith in his plan. He believes that Arab states like Saudi Arabia and Egypt might participate to simply preserve their good ties with Washington. At the same time, the professor warns that it might go not as well as the heads of these countries expect.

"That might be true for the elites of Arab States, for the leadership maybe but not for the public at large. The public is still to different degrees in different countries sympathetic to the Palestinian cause and will not tolerate a complete ignoring of the plight of the Palestinians by their leadership", Miller said.

Even if Trump succeeds in finding the necessary funds for his peace plan, Zisser expressed doubts that the plan will work as planned. According to the published document, the $50 billion in investments will "unleash the economic potential" of the Palestinians and allow them to double their GDP, create over a million jobs and halve the poverty rate in the Palestinian Authority.

However, the professor recalled that the Arab League and countries like Qatar are already sending around $1 billion per year, which only suffices to pay the salaries of Palestinian Authority employees, but isn’t enough to kick-start its economy.

"For that you need hundreds of millions of dollars, not $100 million per month or $1 billion per year […] That’s what it got during the last several years and it did not bring it anywhere. So I think it’s not enough money regardless of the political question", the professor said.