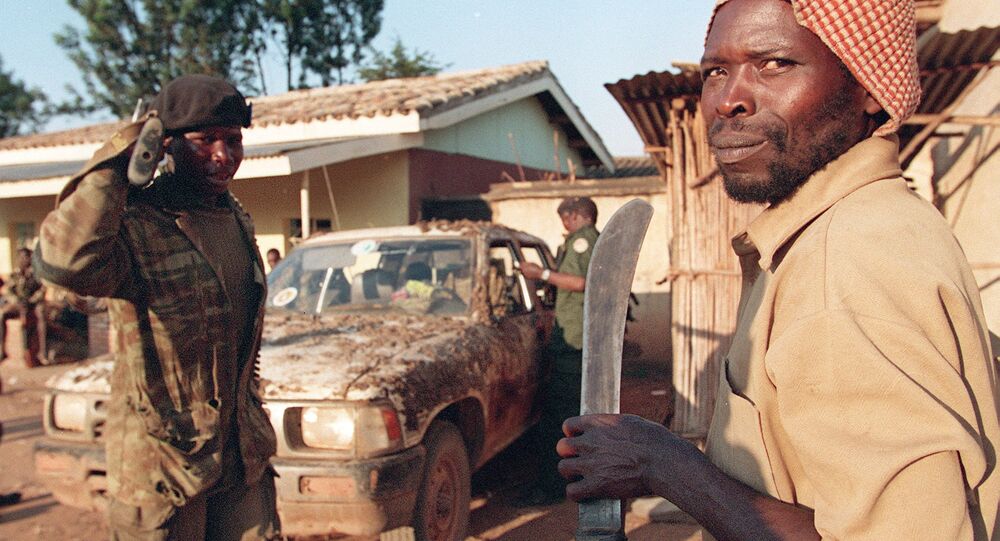 French President Emmanuel Macron has appointed a panel of experts to investigate allegations Paris was partially to blame for the Rwanda genocide which killed more than 800,000 people over 100 horrific days in 1994. Sputnik spoke to Dr Phil Clark, a Rwanda specialist, about the claims made against France.

In a major development coinciding with the 25th anniversary of the genocide, Macron announced on 5 April the creation of a commission of eight historians and civil servants who would delve into the state's archives.

They "will be tasked with consulting all France's archives relating to the genocide…in order to analyse the role and engagement of France during that period," an Élysée Palace spokesman said.

Dr Phil Clark, a Rwanda specialist at the School of Oriental and African Studies, said Rwanda accused France of having supported the ethnic Hutu extremists and the Interahamwe militias who carried out the slaughter of hundreds of thousands of Tutsis — including women and children — and moderate Hutus and allowing many perpetrators to escape justice.

READ MORE: Why Rwanda's Genocide Could Not Have Happened Without France's Involvement

On 6 April 1994 a plane carrying Rwanda's President Juvenal Habyarimana — from the Hutu tribe — and Burundian leader Cyprien Ntaryamira was shot down by a missile near the Rwandan capital Kigali. Hutu extremists blamed the Tutsi-dominated Rwandan Patriotic Front (RPF) rebels and used it as an excuse to launch a genocide against the Tutsi minority.

François Mitterrand, French President at the time, had said that "In these countries, a genocide is not very important" https://t.co/Zr7zz6N57l pic.twitter.com/hV4M4rqW5W

​"France had a very close relationship with the Habyarimana government leading up to the genocide. He was seen as the 'darling of France' because of his support for France's influence in central Africa. France saw Habyarimana as key to maintaining Francophone influence and stopping the RPF's Anglophone aggression. They saw the RPF as a plot by Britain and the US to expand Anglophone influence in Africa. The accusation from Rwanda is that France was directly involved in training the Interahamwe militias," Dr Clark told Sputnik.

"Between 1992 and 1994 France is accused of arming and training these militias and it is said they knew they were going to be used to target Tutsis. Rwanda is calling for a full acknowledgement by France," Dr Clark said.

The RPF took power in Rwanda after the genocide and its leader, President Paul Kagame, is still President.

It's time to stand up as #Rwanda's united people to defend the dignity of #Hutu & #Tutsi massacred by @rpfinkotanyi & #Interahamwe in 1994. Commemorating #Tutsi genocide alone is not only a treason to our national unity but institutionalizing a form of apartheid among the victims

Dr Clark said France's President in 1994 was Francois Mitterrand, whose son Jean-Christophe Mitterrand, an arms dealer, was also his unofficial adviser on Africa.

According to Dr Clark, Mitterrand's son had a close relationship with the Rwandans and it was alleged he was personally responsible for the transit of weaponry into Rwanda and this was later covered up.

In 2009 Jean-Christophe Mitterrand was given a suspended prison sentence and a 375,000 euro fine for receiving embezzled funds from the illegal arms sales to Angola.

Mitterrand left office in 1995 and died the following year but subsequent French Presidents have all refused to admit any wrongdoing on France's part.

"When he was President [Nicolas] Sarkozy went to Rwanda and apologised in the vaguest sense but didn't go any further. What Macron has done is the most concrete step so far in addressing what France did in 1994 but the response is muted in Rwanda, they're saying 'Let's just see what they do.' It could just be a PR move," Dr Clark told Sputnik.

© AFP 2020 / Simon Maina
France, BNP Paribas Bank Accused of Having Hand in 1994 Rwandan Genocide
Dr Clark said there was some concern in Rwanda and also among genocide campaigners in France about the choice of those on the investigation panel.

"Macron has appointed eight commissioners — all of them French — but none are Rwanda specialists. They are historians or civil servants but not even Africa experts. Some in Rwanda are wondering if this is going to be a bureaucratic exercise which will end up with a whitewashed report," Dr Clark told Sputnik.

Tomorrow exactly 25 years ago the genocide against the Tutsi & moderate Hutu started in Rwanda. In 2000, in Kigali, I apologised in the name of Belgium for our responsibility for these atrocities. Last year I went back & paid tribute to the more than 800.000 victims. We remember. pic.twitter.com/DwWoseeMad

​On Friday, 5 April, just after making his announcement, Macron met the Ibuka association of genocide survivors, the first time a French president has granted them an audience.

But Macron failed to show up at the 25th anniversary commemorations in Rwanda on Monday, 8 April, sending instead a French MP of Rwandan origin, Herve Berville.

Marcel Kabanda, 62, the president of Ibuka France, said the commission was a "strong gesture."

© AFP 2020 / Simon Maina
Rwanda Looks for Answers in Genocide Documents Declassified by France
Dr Clark said the commission of inquiry would have a tough task in getting to the bottom of what role the Quai d'Orsay, the powerful French foreign office, played in the run up to the Rwanda genocide.

But Mr Kabanda, whose family was wiped out in the genocide, said they had been "disappointed" and "betrayed" before, noticeably when President Francois Hollande allowed a trawl of the archives, only for it to be very limited in scope.

"The first thing the French establishment will do is close ranks. It's all well and good to commission an inquiry but it has to have some teeth and it has to get its hands on the key documents. Key people will refuse to speak and some documents will have been shredded. But there is such a paper trail that even the French establishment will fail to destroy all the documents," Dr Clark told Sputnik.

Dr Clark said the Rwandans also wanted Paris to get to the bottom of allegations about Operation Turquoise, the deployment of thousands of French troops to Rwanda in June 1994.

While ostensibly the idea was to set up a safe zone, it is alleged that French troops turned a blind eye to some killings and also allowed some of the ringleaders of the genocide to escape into neighbouring Zaire, now known as the Democratic Republic of Congo.

One of those who got away was Habyarimana's widow, Agathe, who fled to Paris, where she remains to this day. She is now 77.

© AFP 2020 /
Agathe Habyarimana, the widow of President Habyarimana, has lived in exile in France since the genocide, which she is accused of having whipped up after her husband's death

.@BuchanaPN, @HerveBerville @TonySebera sharing thoughts on how #technology can be used to educate young generation and preserving memories & champion humanity as we remember those lost in the 1994 Genocide against The Tutsi pic.twitter.com/kJZ6hDpOu9

​"She was part of a group of Hutu leaders within the government known as the Akazu, who were the hardline extremist core. The allegations are that she was part of this inner circle that plotted and carried out the genocide from day one. Rwanda has tried to extradite her twice since 1995. She has always enjoyed security and protection from France. It shows how close they are and they are worried that if she were prosecuted it would uncover secrets about France's involvement," Dr Clark told Sputnik.

Macron has claimed he is willing to break with the past and shed light on France's colonial and post-colonial past.

He threw open the archives on that conflict, which ended when President Charles de Gaulle finally accepted independence.

As yet that trawl has not yet divulged any earthshattering documents.

"Macron is not wedded to the old French political establishment in the same way as previous presidents. Whether it was a Socialist or a Gaullist who was in charge, they didn't want to go into it," Dr Clark told Sputnik.

“Nazis referred to Jews as rats. Hutus involved in the Rwanda genocide called Tutsis cockroaches. Slave owners throughout history considered slaves subhuman animals.. it's important to define and describe dehumanization, because it's what opens the door for cruelty and genocide” pic.twitter.com/DbRZ2wvikm

​He said the commission of inquiry was "potentially explosive", especially if it led to a full acknowledgement by the French state, but he said it was too early to say if it would come to anything.

"The proof will be in the pudding," Dr Clark told Sputnik.

President Kagame recently changed the constitution to allow him to carry on as head of state until 2034.

"There is no serious Hutu opposition in the country now. Hutu civil society has been dismantled and the only opposition to Kagame is really from Tutsi exiles like the Rwanda National Congress, who are based in South Africa.

Dr Clark said there was some evidence they were now trying to "build alliances" with Hutu militias based in the Democratic Republic of Congo, many of whose leaders were ironically involved in the genocide.