George Soros, once a brilliant and effective strategist, is now fighting a losing battle and still dreams of his glory days, Eric Kraus, an independent political risk analyst, told Sputnik. According to the analyst, former White House strategist Steve Bannon is today what Soros was in the 1980s.

George Soros, a Hungarian-born American billionaire and investor known as the man who "broke the Bank of England" has doubled down his efforts to support Democrats ahead of the 2018 midterm elections in the US. On the other side of the Atlantic Ocean, his confrontation with Hungarian Prime Minister Victor Orban continues after his Budapest-based Open Society Foundations' (OSF) headquarters were forced out of Hungary. For his part, former White House strategist Steve Bannon has kicked off the Movement project in an apparent attempt to counterbalance Soros' foundations, which have been operating in the Old Continent since 1984.

Sputnik reached out to Eric Kraus, an independent political risk analyst, who once gave Soros valuable advice, asking him to share his view about the billionaire and explain the latter's current opposition to Trump and right-wing parties in the US and the EU.

Sputnik: What's your take on George Soros' "struggle" against the Right in Europe, most notably Viktor Orban, and against Donald Trump in the US? Does he have a chance to win or is he on the wrong side of history now?

Eric Kraus: I wish you hadn't asked me that question! The topic — though important, gives me no pleasure — this for two reasons:

First, the attacks on Soros tend to attract some of the worst dregs of humanity: those same anti-Semites, infantile conspiracy theorists, and chronic losers who rant about the nefarious influence of the Rothschilds; a banking family once at the very heart of global finance, pulling all the strings… at the same time that Napoleon finally ran out of luck at Waterloo!

Today, of course, the Rothschild banks — all of them combined — don't have one one-thousandth the heft of a Bank of America, or a Goldmans, or Deutsche (Bank). They are highly skillful but marginal players. As for Soros, his influence is substantial, but not terribly successful. He is fighting a losing battle. The color revolutions have faded — the push-back is underway.  It does not matter whether Soros is Jewish, Catholic or Hindu. What matters is whether or not he has remained faithful to his own intellectual framework — in my view he has not.

READ MORE: Weaponizing Media: From 'The Russians Did It' to 'Rothschild Conspiracy'

© AP Photo / Evan Vucci
The Movement: What is Steve Bannon Cooking up in Europe?
Second, for many years I deeply admired George — his early work was quite brilliant — "The Alchemy of Finance" being one of the only business books I not only finished, but actually read twice. When I left my native Paris for Moscow in 1997, the Open Society Foundation was doing some very useful non-political work here in Russia.

Unfortunately, like many disruptive thinkers and mavericks, with time his views hardened along with his arteries; Soros is now sadly reminiscent of an aging African dictator, surrounded by sycophants and hangers-on, no one daring to tell him that he is missing the point — the world has moved on and faces new threats — the post-WWII system is no longer relevant.

Soros still dreams of his glory days. This seems particularly tragic in the case of a man whose entire world view, and whose fabulously successful trading career, were based upon his constant challenge and re-challenge to his own most basic assumptions. Nothing was dogma to George — no ideology, no religion was allowed to get between him and the observed reality. 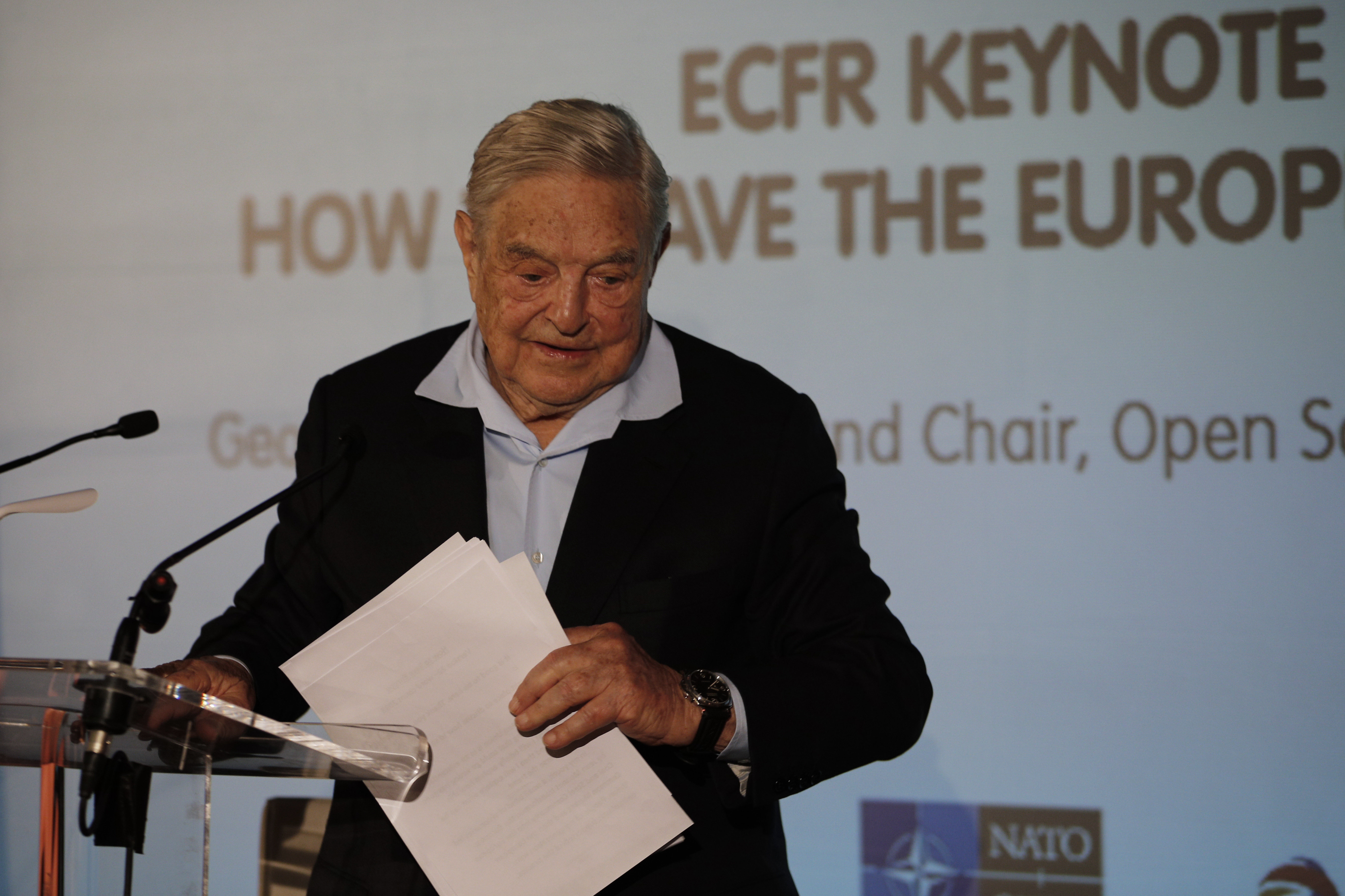 © AP Photo / Francois Mori
George Soros, Founder and Chairman of the Open Society Foundations leaves after his speech entitled "How to save the European Union" as he attends the European Council On Foreign Relations Annual Council Meeting in Paris, Tuesday, May 29, 2018

Sputnik: What kind of man is George Soros? Conservatives are blaming him for his migration policy and color revolts. When did he leave "the right path"?

Eric Kraus: I once managed to convince Soros to not invest with [former Russian media tycoon Vladimir] Gusinsky, explaining that the guy was a fraud, essentially bankrupt, and was to the free press what Osama bin Laden is to civil aviation. George growled angrily, but displaying his famed flexibility, turned on a dime, abandoning the deal (thus saving himself a good $250 million.)

Soros was distrustful, skeptical, totally unsentimental — always ready to discard anyone who lost his confidence, but with an extraordinary flexibility in his thought process. He was a good judge of men — his team was almost uniformly brilliant. Unfortunately, the drubbing he took in Russia, where his entire view of the political process was deeply flawed, seeing [then Russian President Boris] Yeltsin as some sort of liberal reformer who sought to create Soros' dreamed-of Open Society, caused serious damage to his fragile ego — and soured him when Russia finally did begin her historic transformation under Vladimir Putin. Gradually, Soros became increasingly dogmatic, mistaking the European status quo for his dreamed of kingdom of pure reason.

Sputnik: Former White House strategist Steve Bannon has created The Movement as an organization to counterbalance Soros' left-wing NGOs in the Old Continent. What do you think about that? Does it mean the US wants to hijack the rise of the Right in the EU and take it under control? Or is Bannon's movement a "helping hand" stretched to European conservatives from the other side of the ocean?

Eric Kraus: To describe Soros as "left-wing" is patently absurd — he is a billionaire, as anti-Marxist as anyone on Earth — a firm believer in the capitalist system who has never been remotely attracted by socialism. Soros is a liberal in the 19th century sense, a social radical intent upon imposing post-modern norms always and everywhere, and, closely linked to some of the worst of the Washington neocons, has become a fervent supporter of Washington's brutal foreign policy.

© AFP 2019 / LAKRUWAN WANNIARACHCHI
Ex-Clinton Aide Cracks Up TV Host by Blaming Trump for Bomb in Soros’ Mailbox
More generally — the old left-right dichotomy is as dead as the French Revolutionary Assemblé where it originally described the seating arrangements. Marxism — thus "the Left" — is no longer a remotely credible force. Instead, the new split is between Center and Periphery. The US Republican and Democratic parties are both Center, as are the European mainstream parties. The rebellious parties of Europe —Alternative for Germany (AfD), Lega Nord, Front National [The National Rally], the New Finns — are Periphery. Trump is something of a mixed bag, presenting himself as of the Periphery — but objectively advancing the economic interests of the Center — the US military-industrial complex and the major banks, while simultaneously engaging in political warfare with some of its effector organs — the CIA and the security state.

Soros, is as much Center as it is possible to be, but his is a distinctly  rear-guard position — the failure of the old Atlantic Establishment to maintain the purchasing power of the middle-classes, the disaster of the euro for the young people of Southern Europe, the hijacking of the American economy by a tiny elite, the crumbling of the European social system amidst uncontrolled immigration and imposed social radicalism — all of these are now meeting a wave of popular rebellion which is far from having crested. It is hardly surprising that the old Establishment seeks to defend itself — and Soros has hardened from maverick to passionate paladin of the status quo.

The fight between him and [Steve] Bannon shall be a pleasure to watch. Bannon is today what Soros was in the 1980s — a true maverick, prickly, aggressive, restless, hell to work with, totally unsuited to function in an organization… but devastatingly effective. If he is able to federate the parties of the European Periphery, and provide a united front against the massive inflow of African hunter-gatherers, as well as enforced political correctness (where a sex-change becomes something of a healthy choice — like shoe color or having tattoos) and its promoters' desire to destroy the Judeo-Christian basis of European civilization, he will have done us an immense service.