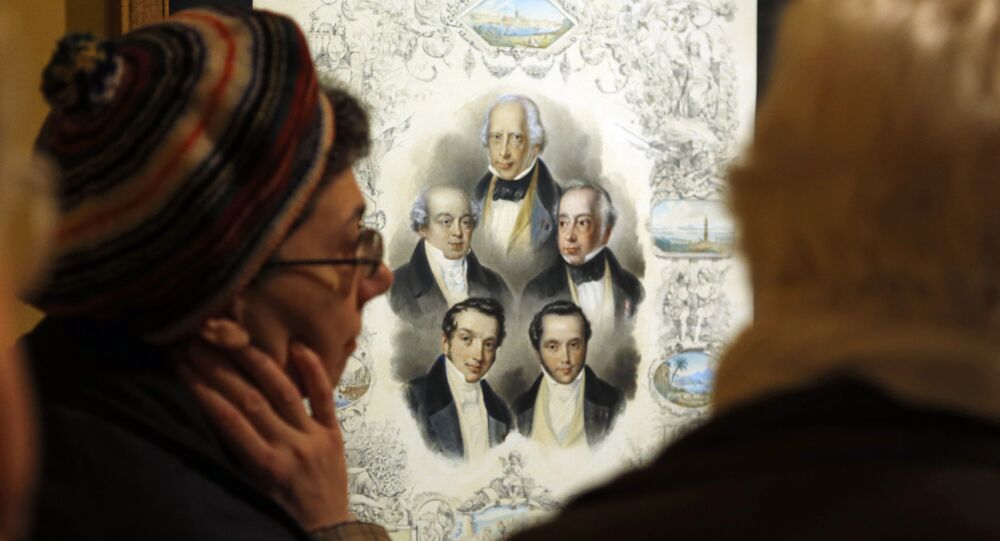 The rise of the alternative media has weakened the grip of the established MSM in the global mind space, however, one should keep one's eyes wide open not to fall into traps of bias and myths, be it "the Russians did it" or "the Rothschild conspiracy," independent political risk manager Eric Kraus told Sputnik.

Scapegoating has become commonplace in information warfare, be it ubiquitous "Russian little green men" or virtually "omnipotent" Russian President Putin, or the "sinister" clan of the Rothschilds.

"It is convenient to attribute everything the author does not like — from financial collapses to refugee crises to elections gone wrong to the mythical Rothschild central," Kraus told Sputnik. "The Rothschilds were indeed at the very fulcrum of global finance and politics — about the same time that Napoleon was suffering a bit of bad luck at Waterloo, some 200 years ago!"

© Flickr / Kevin O'Mara
Russians Did It! A List of Dastardly Deeds Ridiculously Blamed on the Kremlin
The asset manager underscored that "at present, the main thing that the various Rothschild entities have in common is the name."

"Not only are they of very different professions, competence and influence, but especially, even if we were to add them all together, the resulting entity would be worth a few tens of billions of dollars — i.e. it would not have one one-thousandth of the financial weight or influence of a JP Morgan (with its $2.5 trillion in assets), a Citigroup, or a Goldman-Sachs. But myths die hard on the internet — and do be careful to not fall over the edge of the earth!" Kraus noted.

The Rothschilds, a wealthy Jewish family which branches mainly in France, the UK and Germany, originated from Mayer Amschel Rothschild (1744-1812), the founder of the banking dynasty who was ranked the seventh among Forbes' "Twenty Most Influential Businessmen of All Time" in 2005.

'Demonization of the Enemy is as Old as Warfare'

Likewise, Western MSM is losing its veneer of being trustworthy and reputable when circulating accusations against Russia and presenting no evidence to confirm its claims. Thus, Russia's alleged role in the downing of Malaysia Airlines Flight 17 or supposed poisoning of the former MI6 asset and ex-spy Sergei Skripal resemble nothing but "demonization tools" in Western-led information warfare.

"Demonization of the enemy is as old as warfare, i.e. as old as mankind," Kraus remarked. "Hot wars involve slaughtering ones' opponents — and killing ones' fellow man is never pleasant. It is necessary to first convince oneself that the enemy isn't really fully human — that the ordinary rules of conduct do not apply to that subhuman… The current demonization of whichever country, religion, race or society our masters have chosen as the current enemy is in keeping with this old tradition."

The rationale of corporate media's attacks on Moscow and President Putin is crystal clear, the analyst said: "Mr. Putin is inconvenient for the American 'deep state' and the Brussels establishment — their tame press is thus employed to paint him in the darkest colors possible."

'There is No Unbiased Journalism'

However, "there is no unbiased journalism," according to Kraus.

"The media are owned by business interests, and more to the point, individual journalists will frequently have strong personal biases — which both influence and are influenced by their choice of employers; these biases will necessarily influence their work, which will anyway have to conform to the political views of their employers," he explained.

© Photo : Yulia Skripal / facebook
Deadly A234? Two Guinea Pigs, a Cat the Only Casualties in the Skripal Case
Right now, "the situation is getting both better and worse," the political risk analyst believes: "The corporate press has become increasingly propagandized, while social media and the rise of the alternative media mean that alternative voices are now available to anyone seeking them out."

Kraus opined that "the better-quality mainstream media (BBC, NYT or the Economist)" have turned into "foot-soldiers" amid the growing popular rebellion against the political establishment on the both sides of the Atlantic Ocean: "Everyone is now intensely partisan, and the only solution is to read/watch a wide variety of media from across the political spectrum, taking into account the bias of each, and reading between the lines," he advised.

Rise of Alternative Media and MSM's Monopoly on Truth

The rise of the so-called "alternative media" has upset the MSM's "monopoly on truth," however, a reader should keep his/her eyes open nevertheless, the analyst warns.

"Unfortunately, the term 'alternative media' encompasses everything from thoughtful, well-researched blogs (UNZ, The Intercept, RT) which do not try to hide their own biases — to the totally wild, amateurish and dishonestly partisan websites specialized in wild conspiracy theories which flourish on the Internet," he elaborated.

© Sputnik / Natalia Seliverstova
It'll Become Clear Sooner or Later That MH17 Tragedy Part of anti-Russia Propaganda - Russian Foreign Ministry
Explaining the main difference between the mainstream and the alternative media, Kraus noted that "the more serious mainstream media frequently do a reasonable job of fact checking, then construct their narrative not just by the partisan interpretation of the events, but especially, by censoring what they report — and what they ignore": "Information supporting the official narrative gets maximum play — inconvenient facts and background never see the light of day," he said.

However, "the real danger of some of the fact-free segments of the alternative media is that their wild conspiracy theories and willingness to present totally absurd narratives tend to discredit those of us who try to provide a serious, factual alternative to the mainstream media," Kraus concluded.

Russians Did It! A List of Dastardly Deeds Ridiculously Blamed on the Kremlin