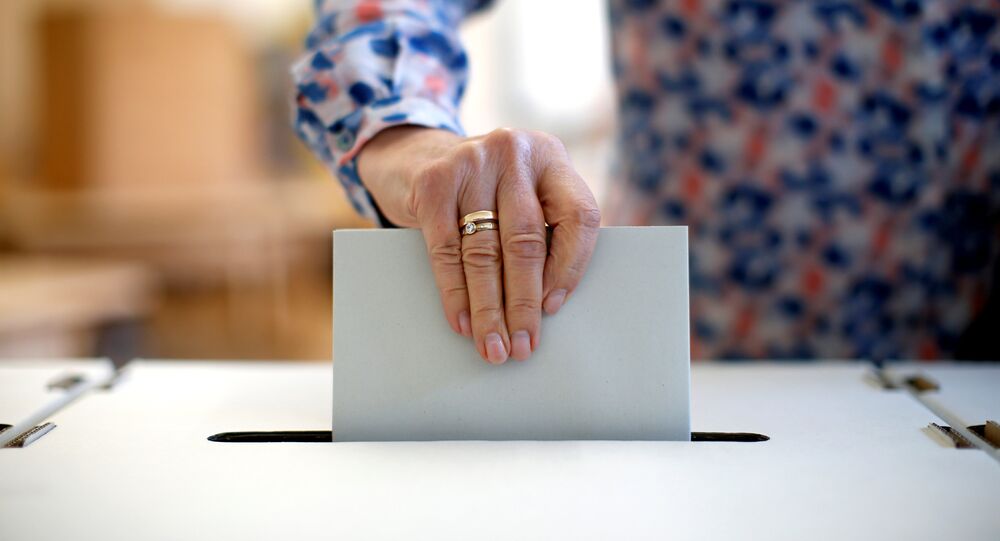 The outcome of the 2018 Bavarian state election has yet again demonstrated that Berlin's migration policy undermined the positions of Germany's major parties, giving way to the right-wing Alternative for Germany and the Greens, political scientist Werner Patzelt told Sputnik.

"There are two different explanations for the result of the election, and, consequently, two different assessments," Patzelt elaborated. "One explanation is that the CSU is to blame for the Alternative for Germany's (AfD) rise due to [the CSU's] old inflexible position on migration policy. And then comes the logical conclusion that the CSU fully supports the migration policy of Chancellor Angela Merkel, and Horst Seehofer should leave his post as an interior minister."

© AP Photo / Matthias Balk
CSU's Losses in Bavaria Can Partly Be Blamed on Berlin - Political Analyst
The 2018 Bavarian state election took place on October 14 to elect 180 members of the 18th Landtag of Bavaria. However, the SPD won only 10.1 percent, losing nearly 10 percent if compared with its results in the last 2013 election, while the CSU gained just 36.8 percent of the vote, falling from a 46.5 percent share. These mean a serious loss for both parties. Now the CSU will need to form a coalition. For their part, the AfD and the Green Party scored 10.3 and 17.5 percent respectively, thus boosting their positions in the unicameral legislature of the state of Bavaria.

According to the political scientist, yet another explanation for the CSU's loss is that many in Bavaria had lost hope that the CSU could keep the Christian Democratic Union (CDU) on "the right path."

"This time the CSU has failed to do that which prompted yet another 'anti-Merkel' election," he said. "This has strengthened the position of the AfD. Therefore, for the CSU, it would be correct to move towards fruitful migration and integration policy, and immediately turn its back on Angela Merkel."

Seehofer Unlikely to Let Anyone Scapegoat Him

Commenting on Horst Seehofer's possible resignation, Patzelt opined that the interior minister had no reason to retire.

"Seehofer cannot understand what he did wrong, and believes that his own party sent him into battle and then left him alone in trouble," he said, adding that the politician was elected as a chair of the party until next fall.

© REUTERS / Michael Dalder
'Clear Signal' to Berlin: Politicians Speak on Election Results in Bavaria
"In my estimation, he will not do a favor to his party to let it scapegoat him," the political scientist said.

At the same time, the German scholar believes that one should not disregard the SPD, despite its huge loss.

"The thing is that the SPD took the wrong track just on one political issue, namely the migration and integration policy," Patzelt explained. "The SPD has taken the stance that was not supported by a number of its supporters, its voters, as well as its municipal members. In this context, other issues, such as pension policy, health policy, etc. do not progress effectively."

"In a clap, migration policy and its consequences have turned into [Germany's] central domestic political problem," he added.

Additionally, the SPD has faced competition from the Green Party, the political scientist highlighted, explaining that the Greens, who are clearly liked the most by German journalists, is a party of "highly educated citizens."

"The Greens have a positive image in Bavaria, they concentrate on such topics as the Motherland, love for the Motherland, and beautiful, environmentally friendly Bavaria in a friendly Europe. These are the topics that attract support," he underscored.

While the AfD has demonstrated impressive results in the latest vote, it performed even better in the 2017 German federal elections, winning 12.6 percent of the vote and receiving 94 seats.

According to Patzelt, this time AfD faced strong competition from a group of independent candidates called "Free Voters."

"If you look closely at the Free Voters, especially in Bavaria, then you can see that, as a rule, these are politicians who left the CSU," the scholar explained. [These are] individuals who for personal or other reasons could not find common ground with the CSU, although they represent the same political beliefs."

© AP Photo / Jens Meyer
German Secret Service BfV to Decide on Surveillance of AfD by 2019 - Reports
Assessing the AfD's political offensive, Patzelt pointed out that the right-wing party is the only political force directly opposing the government's refugee strategy and presenting its own vision on migration policy.

"The AfD is the only party that represents the migration policy that runs counter to the prevailing consensus of the CDU, the Greens and the SPD, on which many have pinned their hopes," he underscored. "In addition, AfD is a party with a clearly articulated stance against Merkel. Those who want to see another chancellor or other chairman of the CDU in Germany pick AfD. And behind AfD there is a growing right-wing German populism, which has long been inexcusably underestimated."

© AP Photo / Geir Moulson
AfD Becomes 2nd Most Popular Party in Germany After Merkel's Conservative Bloc - Poll
The political scientist noted that previously it was believed that German populism largely represented by the Patriotic Europeans Against the Islamization of the Occident, abbreviated Pegida, were just racists and fascists who could be kept in line. However, it was the wrong vision, he remarked.

"Right-wing populism has many supporters," Patzelt said. "Even in Bavaria, where the CSU has contained the right-wing populism for a long time, independently representing reasonable right-populist positions, even there this blocking force of the right-most of all German parties was not enough."

According to the scholar, all the above explains the AfD's rise. He predicted that in Hesse and in the next elections for Lantag, especially in Eastern Germany, the party's climb to power would continue.