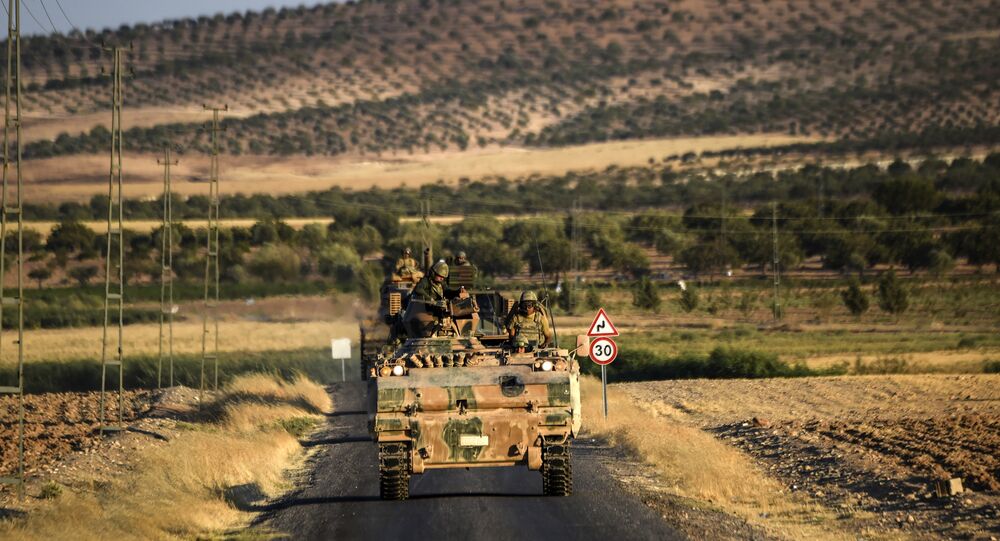 To prevent the creation of an autonomous Kurdish entity in northern Syria by US-backed Kurdish militias and to solve the Idlib issue, Ankara needs to revive working relations with the Syrian government, Turkish political observers told Sputnik, commenting on Washington's alleged attempts to boost its positions to the east of the Euphrates.

Ankara should establish coordination with Damascus to upset Washington's plans to beef up its presence east of the Euphrates River, Turkish political observers said.

"The US is trying to expand its zone of influence, in particular, in the territories east of the Euphrates," Ozdemir Akbal, a political scientist and foreign affairs analyst, told Sputnik Turkey. "Of course, such actions by Washington do not meet the interests of Turkey. Obviously, disagreements continue to simmer in Turkish-American relations, and this is primarily due to the fact that the US has not abandoned its policy of supporting the Kurdish Democratic Union Party (PYD) [which is considered a terrorist organization in Turkey]."

© AFP 2021 / Mohamed al-Bakour
White Helmets Continue to Prepare Provocations With Chemical Weapons in Idlib - Russian Envoy
He underscored that Ankara was seeking to prevent the US from strengthening its positions in northern Syria through supporting Kurdish formations in the region. "I think that the US will not succeed in this," the Turkish political scientist opined.

For his part, Ceyhun Bozkurt, a Turkish political observer, journalist and the author of "Vizesiz Muttefik" ("A Visa-free Ally"), suggested that the US would continue implementing its Syrian strategy despite the Turkey-led operations in the north.

"We see that the presence of the United States in the territories east of the Euphrates is growing every day," Bozkurt emphasized. "From the very beginning of the Syrian civil war the US' primary goal was to form a corridor stretching from the north of Iraq through the northern part of Syria to the Mediterranean. The Syrian part of this corridor, according to Washington's plan, was to be formed by the PYD and the Kurdish People's Protection Units (YPG)."

The political observer explained that Ankara's Operation Euphrates Shield and Operation Olive Branch had spoiled the US' game.

"Even James Jeffrey, the United States special representative for Syria engagement, admitted that they wanted the formation of the Manbij-Afrin line, which ran through the west of al-Bab, but Operation Olive Branch nipped this plan in the bud," Bozkurt said.

© Sputnik / Alexander Tarasenkov
Downed Il-20 Was on Recon Mission Over Idlib De-Escalation Zone – Russian MoD
According to the journalist, the US is making attempts to preserve the structure that they had created in Manbij and to the east of the Euphrates.

He opined that Washington sought to divert Turkey's attention from Manbij in order to strengthen its positions to the east of the Euphrates in case of an attack by the Turkish Armed Forces. Bozkurt believes that the US needs this to push ahead with the creation of an autonomous Kurdish region during the future negotiations on Syria.

"This idea has been inculcated into the local public for some time," he said. "The United States thereby says: to resolve the Syrian issue, this region should become autonomous. The deployment of new American bases is precisely aimed at ensuring the security of this autonomous region in the future. Naturally, such actions can have very serious negative consequences for Turkey."

He pointed out that to tackle this threat, Turkey needs to maintain cooperation with Russia and Iran within the framework of the Astana negotiations on Syria, to convince its allies and Iraq to confront the PYD and the Kurdistan Workers' Party (PKK), and, most importantly, to establish working relations with Damascus.

"Until now, contacts between Ankara and Damascus have been maintained due to Russia's mediation," the political observer underscored. "However, the resolution of the Idlib problem and the situation in the territories to the east of the Euphrates requires the establishment of a direct dialogue between the parties. The situation of uncertainty should be eliminated as soon as possible."

Relations between Ankara and Damascus have deteriorated since the beginning of the Syrian civil war. Although the Turkish leadership has recently somewhat softened its stance towards Damascus and Syrian President Bashar al-Assad, the two sides do not have diplomatic ties. For its part, the Syrian government regards Turkey's presence, let alone military operations, on its territory as illegitimate.

Netanyahu on Strikes Against Syria: Advanced Weapons Won't Make It to Our Foes

If There Is Conflict Settlement in Syria, it Should Include All Parties – Prof