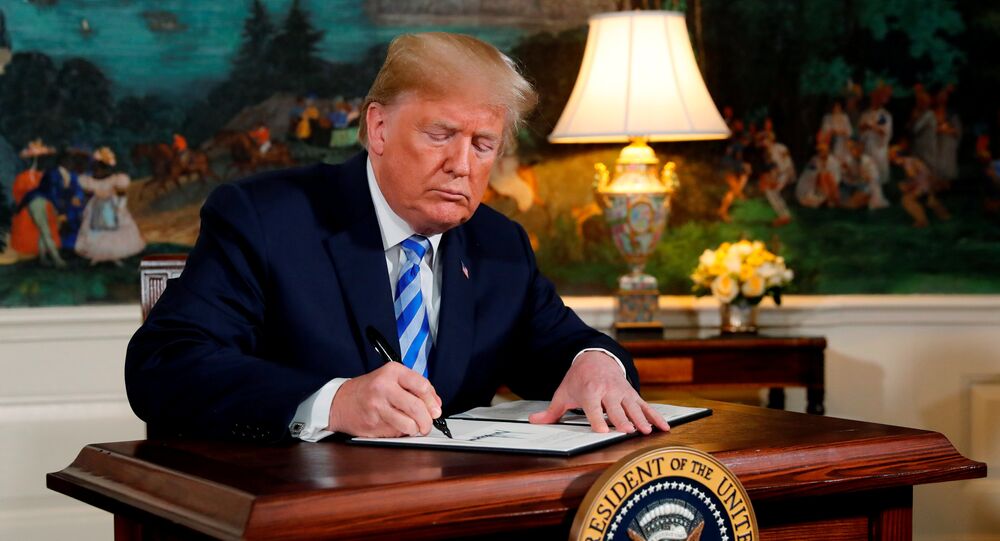 With US President Donald Trump pulling the US out of the Iran nuclear deal earlier this year, many European businesses commercially active in Iran are looking to circumvent Washington’s sanctions.

Sputnik reporter Suliman Mulhem spoke to legal experts from Fieldfisher, a leading international law firm with over 1,000 lawyers and support staff across 20 offices, about the challenges facing European corporations operating in Iran and what they can do to bypass the re-imposed US sanctions.

As noted by Jochen Beck, a partner at Fieldfisher’s competition, regulatory and trade department in Brussels, the main threat against EU businesses in Iran is secondary sanctions, though companies with ties to the US are also at risk of being penalized via Washington’s primary economic sanctions.

Outlining the punitive measures they could face for violating the sanctions, Mr. Beck said “EU companies could be subject to administrative or criminal charges, ranging from financial fines to imprisonment.”

© REUTERS / Raheb Homavandi/File Photo
UK to Continue Doing Business With Iran Despite Challenges - Trade Official
The legal expert also said EU businesses can “limit their exposure to the US sanctions by not using the US dollar as their transaction currency, or by avoiding US products, parts and components.”

However, Mr. Beck insisted that such tactics are “generally ineffective due to the broad wording and extra-territorial effect [of the sanctions],” and said companies remain exposed, especially to the secondary sanctions.

Another partner at Fieldfisher, Stuart Carter, head of their corporate oil and gas division, told Sputnik that businesses continuing to operate in Iran despite Trump’s withdrawal from the Joint Comprehensive Plan of Action (JCPOA), more widely known as the Iran deal, and subsequent re-imposition of sanctions against Tehran, are at risk of reputational damage.

“While a corporation may partake in 'gaming' by operating through subsidiaries not caught by sanctions, such companies can find themselves at the center of an investigation, which can be intensely distracting for the wider corporation and quite possibly erode any benefit gained by stealing a commercial march on competitors through access to markets otherwise blocked by sanctions,” Mr. Carter warned.

“If it becomes public, shareholders may take flight, in particular from institutions guided by high ethical protocols.”

Therefore, even if firms can work around the sanctions and continue their lucrative ventures in the growing Iranian market, they still face other less obvious risks that have the potential to cause financial damage.

© AFP 2021 / ATTA KENARE
Europe Loses $10 Bln Due to Export Cuts to Iran Amid Sanctions Threat – Envoy
According to Mr. Carter, the best way for European businesses to continue to operate in Iran and not be at risk of getting penalized by the US, via secondary sanctions or otherwise, is to “obtain waivers from the US government's Office of Foreign Assets Control (OFAC.)”

Although Washington hasn’t explicitly stated whether or not it plans to grant such waivers in the case of Iran, we can expect the OFAC to only grant exemptions in exceptional cases, as the primary goal of Trump’s exit from the JCPOA is to apply economic pressure on the Iranian government in the hope of forcing them to negotiate a new, more stringent nuclear deal.