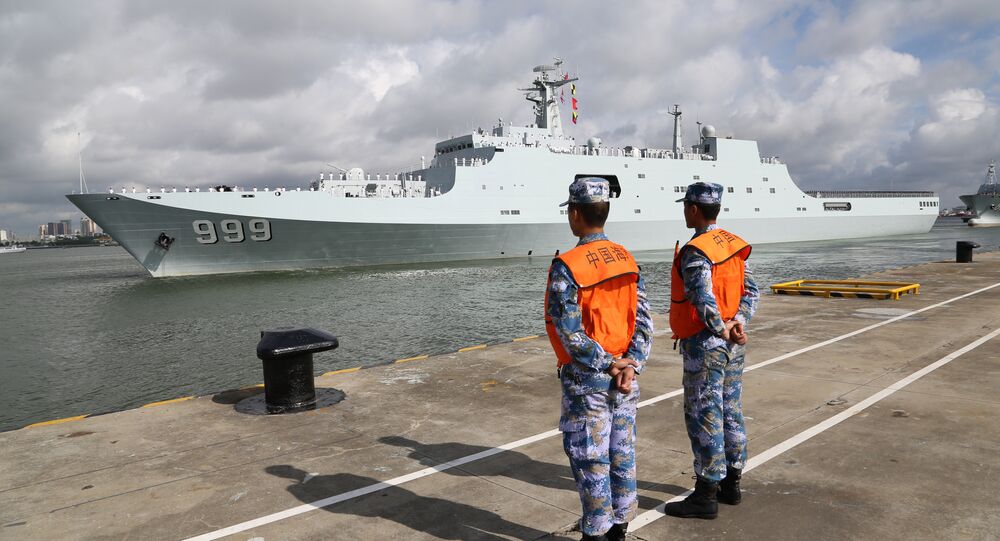 China continues to solidify its positions in Africa, where in addition to its investment activities and so-called railway diplomacy, Beijing is steadily increasing arms sales.

China is boosting defense cooperation with the countries of the African continent: On June 26, Beijing hosted its first China-Africa Defense and Security Forum that brought together representatives from 50 African countries and the African Union.

"Terrorism and violent extremism are making themselves felt in various parts of Africa," Yang Mian, a political analyst at the Center for International Relations at the Chinese Institute of Communications, told Sputnik China. "Local extremist organizations such as Boko Haram and Al-Qaeda in the Islamic Maghreb (AQIM) are active there. Therefore, the region's governments need to bolster their defense capabilities, and China can provide its support to them."

© AP Photo / Wu Dengfeng/Xinhua News Agency
China's Military Presence Necessary to Protect Economic Interests in Africa
He stressed that the parties need to step up counterterrorism efforts. Referring to the piracy issue, Yang suggested that China and Africa could tackle the problem alongside the US.

"China sends patrol vessels to the waters of Somalia and the Gulf of Aden to escort ships, helping the region's countries combat piracy," the analyst elaborated. "China's logistics base in Djibouti is not only able to provide military assistance to Africa, but it also helps the fleet combat piracy along the coast of East Africa and conduct UN peacekeeping missions."

The Chinese pundit highlighted that Sino-African collaboration has deep historical roots. In the 20th century, Beijing assisted African countries in their fight for independence from colonial authorities. These historic ties laid the foundations for mutual trust and good working relations between China and the nations of Africa within the framework of the One Belt, One Road initiative.

He added that Chinese weapons and equipment are cheaper than their Western analogues and by no means inferior to them in terms of quality. Additionally, Beijing is not meddling in African countries' domestic affairs, the analyst said.

Although Africa reduced its total arms imports by 22 percent over the same period, China's share in African arms supplies increased from 8.6 percent to 17 percent. As a result, China outpaced the United States, which accounts for just 11 percent of weapons exports to Africa.

Over recent years, China has considerably expanded its arms sales, both in terms of the number of African countries involved in the deals and the types of weapons and military equipment being sold.

In particular, China has supplied tanks and armored cars to Tanzania, Chad, Gambia, Namibia, Rwanda, Burundi, Mozambique and Gabon, according to the United Nation Register of Conventional Arms (UNROCA).

© AFP 2021 / ZACHARIAS ABUBEKER
How China is Transforming Africa Into 'New Factory of the World'
Speaking to Sputnik, Nikolai Shcherbakov, an analyst at the Center for African Studies of the Institute of General History of the Russian Academy of Sciences (RAS), suggested that Beijing is seeking to solidify its position as a major arms supplier to the continent.

"Traditionally, the vast majority of African countries are largely importing military equipment either from (the former colonial powers in the region), or, earlier, from the Soviet Union and Eastern European countries," the analyst explained. "Now the Chinese believes that it is necessary to squeeze the traditional suppliers from the market and more vocally declare itself as an exporter of weapons and equipment."

China's rationale behind this expansion is quite understandable, according to Shcherbakov, since Beijing is seeking to protect its assets and infrastructural projects on the continent. China has long been known for its Africa investments and large-scale railway projects in the region.

"This could be either 'direct defense,' like in Sudan's Darfur region, with the assistance of UN peacekeepers, or 'indirect protection,' when [China finds] it necessary to gain influence in certain African countries," he explained.

According to the analyst, the recent China-Africa Defense and Security Forum is an effective tool to achieve the aforementioned goals. By sharing experience and best practices, the countries create an entirely new atmosphere of cooperation. Additionally, it helps Beijing pursue its economic interests in Africa and step up weapons sales.