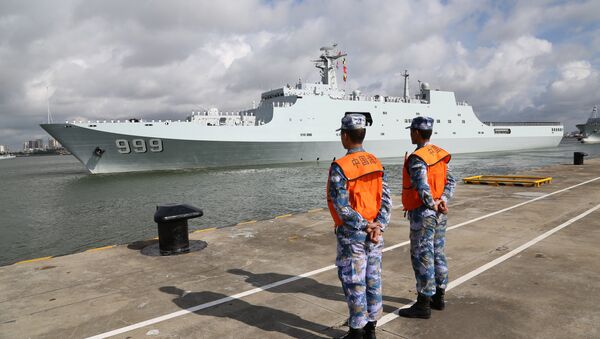 After establishing its first overseas naval base in Djibouti in the Horn of Africa last year, China is expected to boost its military presence in Africa rapidly in the coming years, as more and more Chinese-backed infrastructure projects are expected to kick off in the continent with bitter memories of colonization, US press reported.

READ MORE: US Pilots Warned of Powerful Lasers Coming From Near China's Djibouti Base

While Western politicians and academics have warned of "new colonialism" from China, growing presence of Chinese military forces, especially naval warships, is vital in protecting Chinese citizens and their properties, who are often vulnerable in regional armed conflicts in Africa, Chinese military experts argued.

"I have always argued that China needs to build a capable blue-water navy, because of Chinese interests in Africa. In Ethiopia, several staff members of a Chinese oil company were killed and their assets were looted, causing millions of losses. The Ethiopian government forces deployed failed to protect Chinese nationals, amid a fierce civil war in the country. If you have an aircraft carrier in the region that can be ready to attack at any time, you can already go negotiate with both sides in the civil war and make it clear that we’re only here for business and please don’t interfere with our business in your fighting. We’re ready to do business with either side, whoever will win the civil war in the end," Ni Lexiong, a military expert at the University of Politics and Law in Shanghai, told Sputnik.

In 2007, 9 Chinese employees of an oil field project under Sinopec were killed after over 200 rebel militants stormed their base. The local economic disparity in Africa has made Chinese-backed projects common targets in recent years. The base of a Chinese-backed hydro dam project was raided by 20-30 armed assailants in Mali in West Africa as recently as in March, according to Chinese press reports.

The Shanghai-based expert argued that the presence of advanced Chinese military assets is enough to deter similar attacks without using deadly force.

"If you want to do business overseas, the nation has to be very strong. If we have an aircraft carrier in the region, you can invite the rebel leader to your ship and show him vivid surveillance pictures of his whereabouts from Monday to Friday. This is a clear warning that if he decides to touch Chinese interests, his forces could be taken out with precision. Will he still dare to attack Chinese commercial projects as a bargaining chip against the ruling government in his country?" he said.

Last summer, a Chinese movie called Wolf Warrior 2 shattered domestic box office records and became the highest grossing film in China. The patriotic action movie featured a plot where a former Chinese special forces soldier fought to save Chinese nationals trapped in a civil war in Africa and the group was eventually rescued by Chinese naval forces based in the region.

Despite China's growing military strength in Africa, Chinese forces are unlikely to pick a side in a local military conflict in Africa, as Beijing could draw lessons from the tactics the British Empire used in China during the Qing Dynasty, Professor Ni suggested.

"Take the British Empire as an example. Even when the British and French joint-forces entered Beijing [during the Second Opium War in the 1860s], they did not overthrow the Qing dynasty. They simply made demands to the Qing rulers and left the option open to support the Taiping Rebellion forces. China was humiliated during such experiences. It’s important for us to learn from them too," he said.

A massive civil war between the Qing dynasty and the Taiping Rebellion forces took place in China in 1850-1864, which ended in the defeat of the Taiping forces.

READ MORE: the US Asks China to Probe Incidents of Targeting Airmen With Lasers in Djibouti

Other military experts pointed out that it was unlikely for China to seek global hegemony, as the United States did, in the near future.

"Getting involved in regional military conflicts is a completely different matter from rescuing Chinese nationals in danger. Picking a side in a local military conflict is just like what the United States used to do to seek global hegemony. In the short term, China is probably not going to do that," Arthur Ding, director of the Institute of International Relations under the National Chengchi University in Taipei, told Sputnik.

Chinese Drone-Killing Laser Takes Out Targets 300 Meters Away in Demo
The Taipei-based expert noted that in previous rescue operations, China did not even deploy its military forces and sent commercial airplanes instead to pick up Chinese nationals in distress in Africa.

Any possible Chinese military action or deployment in Africa is probably going to take place under the framework of the United Nations (UN), Professor Ding suggested.

"If you look at previous actions from the Chinese People’s Liberation Army (PLA), all of them came under resolutions from the UN. No matter its peacekeeping missions or other operations, they all took place under the UN framework, which offered the proper justification. I believe Chinese leaders would be very careful when it comes to getting involved in local conflicts in other countries," he said.

The expert expects Chinese PLA missions in the next 5-10 years to primarily be rescuing Chinese nationals without getting involved in any regional military conflict.