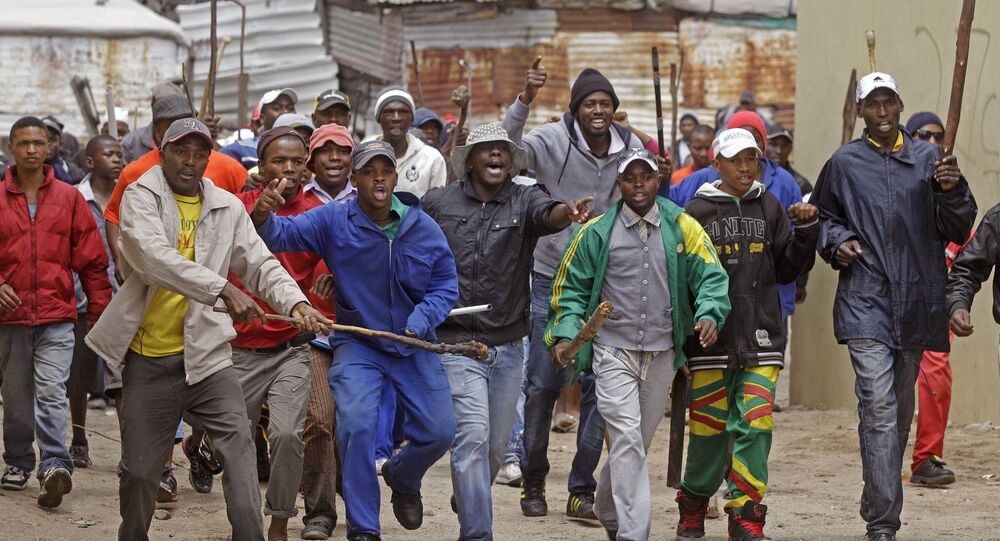 ITV News Africa has reported that locals are taking up arms to protect their property in South Africa amid a wave of murders and attacks on white farmers. The AfriForum civil rights group has shared its view on the reasons in an interview with Radio Sputnik.

A recent murder of an elderly white couple in South Africa has triggered a new round of debates about violence against white landowners and the government’s failure to handle crime. The tide of violence has triggered uproar on social media, with some users blaming the authorities for turning a blind eye to racial murders. At the same time the South African government is looking into constitutional reform that would let land to be expropriated from white farmers without compensation. Radio Sputnik discussed the recent spiral of violence with Ian Cameron, Head of Community Safety at the AfriForum civil rights group.

Sputnik: What are your thoughts on these reports of white farmers picking up arms to protect themselves? Does it come as a surprise to you?

Ian Cameron: The major surprise is that’s the image being created in the outside world. There’s a definite increase in community safety structure throughout South Africa because of South Africans not being able to trust in government to keep them safe, not even including the crisis that we are facing at the moment in rural areas. So, in the farming community, members they even started patrolling the areas, they got reaction teams, armed reaction teams that stand ready to assist if any attack should happen.

And just this past weekend with the murder, double murder of the elderly couple, it’s important to understand that for example with that case there’s actually been no decent capability from the police to handle the scene properly to the point, where we really had to create a lot of pressure on government in order just to make sure that we get the correct specialist units on the scene in order to get all the necessary forensic evidence that they need.

Sputnik: How justified are the claims that there’s white genocide happening in South Africa?

Ian Cameron: From my side, I don’t blame people who are using the term white genocide. The reason is just simply that there’s massive amount of attacks that we see on a daily, even weekly basis. We have already recorded 178 attacks since the first of January 2018. Just for this month alone, for the month of May, there have already been 15 attacks on farms. We are hardly even halfway through the month. The major issue is true that the majority of people that are killed on farms are usually white, but there are also cases where black farmers and also farm workers are murdered by attackers who come in from the outside.

There’s a general crisis regarding crime and specifically violence during these farm attacks, and I guess that the torture is what actually the most worrying part.

Sputnik: Am I right in thinking if I recall that about 20-35 years ago, when the apartheid was first crushed, the same issue happened in South Africa, where farmers were very concerned about their land being overtaken by the black community. Is this a repetition historically of what happened twenty-thirty years ago?

Ian Cameron: The farm attack issue is actually a continuation, not much has changed. And we have continued to see drastic level of farm attacks throughout time. What’s interesting is that we used to have community safe initiatives together with the military, called the commando system and that was disbanded in 2003. And there was no special capacity anymore that kept rural areas safe. The fact they are keeping quiet and almost living in denial about the challenges that we are facing. It almost makes them complicit. It’s a very difficult, very delicate situation. What the reason might be, I can't prove that, I don’t have evidence to say that. But the fact that the majority of people that get hurt are from a specific group in South Africa is a fact.

Sputnik: Why is it that the South African government is complicit, they are ignoring it. What can the white community, the larger community, do?

Ian Cameron: I think there are a few simple steps that they can follow. First of all it needs to be prioritized. To this point farm attacks have actually been de-prioritized by the fact that the statistics aren’t being made available, that there aren’t specialized units looking into it. A lot of people actually like to make it a political issue only, and often say that we are only talking about it because the majority of people getting hurt are white. But what we are also saying that if we take the cultural element out of it, we take the racial element out of it, we are going to have a serious problem in South Africa without farmers, because farmers are feeding the country. And no country can have a sustainable future if they don’t have a healthy agricultural sector. And at the moment this is definitely going to be threatened by what is happening in the country. The danger that we face is of a very serious nature, and it’s not normal that we have to work with this type of violence on a community level from day to day. From the government side, what I’d like to see is that the specialized unit is returned, that we have a decent reservist system that can be used where the police reserve is always available in the community to perform police work for the community and do pro-active work in order to prevent these crimes from happening.

Sputnik: Now some experts have criticized the international communities and lawmakers for focusing on the clashes between the Israelis and Palestinians, but ignoring this massacre in South Africa. Are you getting them more airway? Are you speaking to more international countries and the media organizations and countries to highlight this particular problem at the moment?

Ian Cameron: We have been speaking obviously with the media from Australia and from the UK, and then recently China. There’s a group from Japan that visited, from Tokyo, and obviously the US as well as German media and even some French media. That there is a definite increase in these stories been told is a fact, and we need to make sure that we keep on telling the truth.

Ex-South African Leader on Graft Charges: 'Truth to Come Out, What Have I Done'

What South Africa Will Be Post-Zuma; The Economics of 'Black Panther'