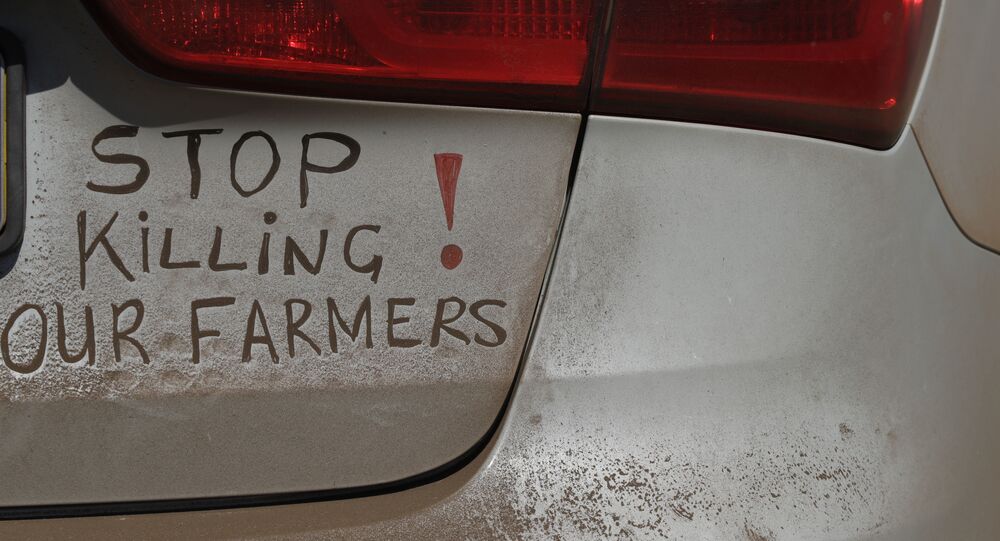 While the South African government is seeking to expropriate land from whites through a constitutional reform, the local opposition, civil rights activists and social media commentators have raised the alarm about more killings of white farmers and blame the ruling ANC for neglecting crimes, some of which have been described as racial.

The recent murder of an elderly white couple in South Africa has triggered another round of debates of violence against white land owners. According to the South African Crime Intelligence & Community Awareness page, Coleen Engelbrecht was strangled with an iron cord, while the intruders cut her husband’s throat. The killing has become another episode in a wave in brutal farm attacks in rural areas. According to South African News, in April such crimes made headlines as six of them were registered within just three days. The splash of violence has triggered uproar on social media, with many users blaming the authorities for turning a blind eye to racial murders.

"Just a week ago I stood on their farm with their nephew. He spoke to me about his hopes for Sth Africa. This morning I woke up to the news that Fanie & Coleen Engelbrecht were murdered on their farm after returning from the church. Murder on farmers is unfortunately not a myth." https://t.co/CaA3ugcyp4

OMG! Two white farmers brutally murdered every week in South Africa and their farms taken and given to Blacks.

While the South Africa Government and it's politicians are quiet about farm attacks and murdering of white farmers the RSA government has condemned "in the strongest terms possible" the latest violence in Gaza, has also withdrawn its Ambassador to Israel in the wake of violence

South Africa recalls its ambassador to Israel because of the 52 Palestinian protestors killed in Gaza today, yet it does absolutely nothing about the 30 farmers killed per year on South African soil. Selective protesting is hypocrisy. Charity starts at home. Protect all lives.

Yes. White farmers. How is that not racial?

​However, some argued that skin color has nothing to do with the killings.

Breaks my heart to hear that anyone has been murdered, don’t care what colour they are! But stop with your #WhiteGenocide bullshit! https://t.co/XNE4KiCENG

Meanwhile, ITV News Africa has recently reported that white farmers are taking up arms to protect their property.

The Democratic Alliance (DA), which is in opposition to the governing African Congress led by incumbent President Cyril Ramaphosa, has accused it of “sitting idle” while the attacks “escalate.” They blamed South African police for not doing enough, claiming the forces in the rural areas are under-resourced. Meanwhile, in 2016-17, 52 murders were carried per day in South Africa.

“Attacks on anyone who lives on or visits a farm – have increased once again. The attacks are carefully planned, and without exception include violence, and frequent torture of the most horrific kinds. Even children are mercilessly targeted,” DA MP Diane Kohler Barnard said, cited by SA News.
However, a South African civil rights group, AfriForum, has accused the country’s government of neglecting persecution against minorities.

Currently, the South African government, led by Cyril Ramaphosa from ANC, is looking into constitutional reform that would let land to be expropriated from white farmers without compensation. Since white minority rule ended more than two decades ago, the land issue has been one of the most politicized and controversial questions in South Africa and its ANC party, which came to power in 1994. In South Africa, where unemployment, crime and poverty are on the rise, 73 percent of agricultural estates still belong to white South Africans, who make up 10 percent of the population.

After years of debates on redistribution of agricultural land, the ANC decided to transfer property to black people without compensation in December 2017.  In February, the Parliament supported this principle. However, to realize it, the Constitution must be changed. The Constitutional Review Committee will provide their assessment on these changes by August 30.

Ex-South African Leader on Graft Charges: 'Truth to Come Out, What Have I Done'