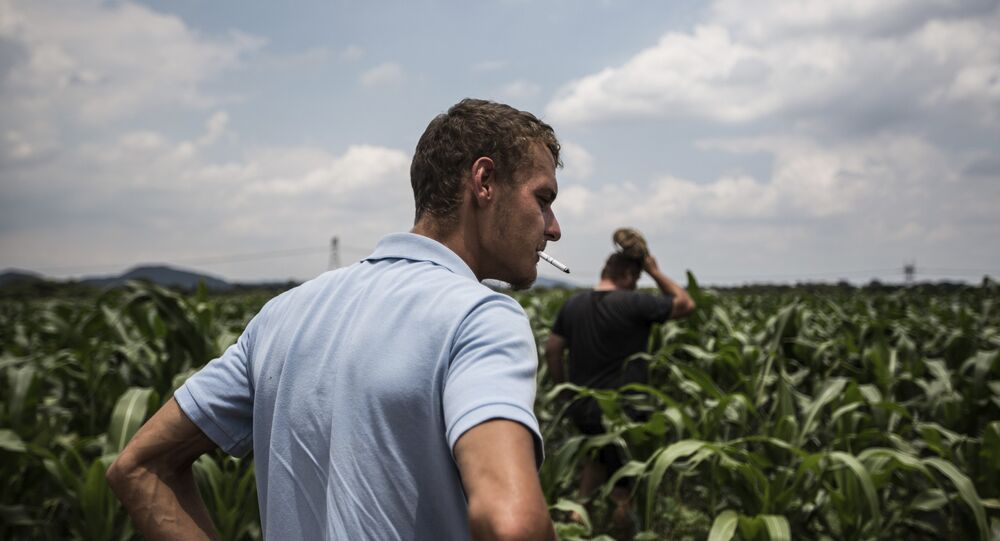 The South African parliament has adopted the motion to change the country’s constitution in order to pave the way for a planned confiscation of white-owned land without compensation.

A motion by the Marxist opposition party the Economic Freedom Fighters, which will allow land expropriations from white farmers without any compensation, was adopted by 241 votes with only 83 against. The motion was supported by the ruling African National Congress and the President of South Africa Cyril Ramaphosa.

The idea of confiscating land from whites became a key point in the president’s program after his predecessor Jacob Zuma was ousted in February, 2018. According to the South African governmental audit, the white minority of the African country currently owns 72 percent of farmland. The head of the Economic Freedom Fighters Julius Malema, who introduced the initiative, claims the law is mere retribution to the “criminals who stole our land.”

Twitter exploded at the news of the Marxist motion being overwhelmingly adopted by MPs, with many crying out for conducting an external investigation of the controversial initiative, even comparing it with the infamous apartheid government:

This is REVERSE APARTHEID at its worse, @UNHumanRights MUST declare the Land Expropriation without compensation policy a violation of Human Rights of the people and a means to instigate WAR CRIMES in South Africa.

White farmers are being slaughtered and now the South African government is coming for their land.

Where are you, @realDonaldTrump?

I do not believe that the non Black Community in South Africa is going to roll over and play dead or bury their heads in the sand like an ostrich. They are going to fight the land expropriation amendment and if necessary continue the fight beyond the courts. https://t.co/1oNNxeIRQp

It’s amazing how silent the media has been about the expropriation of land from white farmers (without compensation) in South Africa.
This is pure racism justified only by Marxist morality.

Several prominent figures in South Africa slammed the initiative as being nothing other than a theft on racial basis.

“The term ‘expropriation without compensation’ is a form of semantic fraud. It is nothing more than racist theft,” Mr Roets, deputy chief executive of the civil rights group Afriforum, said in a statement.

We invite you to come & visit South Africa. There is a lot that the US can learn from the mistakes made here.https://t.co/ZlrlhDVH3v

Some users already started predicting the future dire consequences of this controversial decision:

International Law prevents expropriation of land without compensation and it trumps the constitution and any othet laws in South Africa if this happens in SA then the country will face major economic sanctions and all financial aid will stop international trade will collapse.

Several people drew parallels with a similar law that was adopted in Zimbabwe, which resulted in a severe famine in the country, formerly the “breadbasket of Africa”:

I’m praying that South Africa has dispatched a team of experts to analyze what went wrong with the expropriation of land without compensation in Zimbabwe so that they can avoid the hazards.

Most of Zim’s current problems today can be traced back to our underproductive farms.

Make no mistake, South Africa will become the next Zimbabwe in 5-10 years https://t.co/X81Rh7al7T

There were some, however, who actually favored the motion, claiming it will benefit the people in South Africa:

There is no sensible argument against land expropriation without compensation in South Africa. Even in technical economic terms. The scarecrow of ‘constitutionality’ is even the most ridiculous defense. We will take back the country and life will go on.

These should've happened in 1994. Nevertheless, South Africa is headed to the right direction.

White farmers previously owned nearly 70% of Zimbabwean farmland, but the situation drastically changed after its former President Robert Mugabe adopted a law in 2000 that forced thousands of white farmers to give up their farms and even flee the country, as many of them were being killed by the local population. Severe famine struck the country, which used to have one of the strongest agricultural sectors in the region, due to mismanagement and the ineffective farming methods of the new owners of the land. Zimbabwe was forced to resort to donor handouts and food imports from neighboring countries.

he apartheid government existed in South Africa between 1948 and 1991. During this period, racial segregation and discrimination was officially institutionalized in the country, with the black population being discriminated against by whites, who dominated the economic and political spheres of life. The last parts of apartheid legislation were removed in 1991, with the first multiracial elections held in 1994.