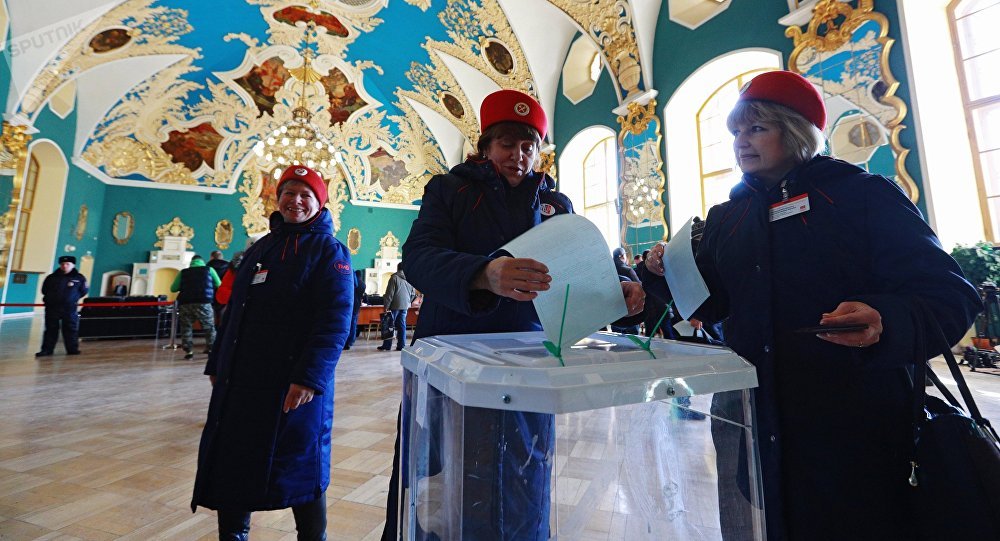 A member of the German parliament representing the Alternative for Germany party (AfD) Dr. Robby Schlund was among numerous observers at the recent presidential election in Russia. Sputnik discussed the outcome with the politician and practicing physician from the state of Thuringia, in the heart of Germany.

Dr. Schlund shared his experience over the election, saying "We were very pleasantly surprised. Everything was very well organized, and we always had every opportunity to visit a polling station. We headed to a few, but managed to visit only six of them.”

Many things were completely new in comparison to the elections of the past years in Russia, first of all the electronic ballot boxes caught the attention of the delegation members:

"I have to say, the electronic voting boxes are a good idea! Without electronic boxes, the electoral commission has to count the votes by hand, which often ends with recounting. These e-boxes help to avoid occasional mistakes and working extra hours."

The delegation was given sufficient information. For example, the observers could check the seal on the ballot boxes and were allowed access to all the rooms at voting stations.

"We could check the rooms without any restrictions. Everything was very correct there. Overall, we were very pleasantly surprised by the organization as well as the voting process. I think many other observers would agree with me," said Schlund.

Around 1500 election observers and international experts and parliamentary delegations from many countries, including the Bundestag members of the AfD, visited this election. The Alternative for Germany, which is new in the German Parliament, had the strongest representation during the recent elections. One of the reasons for such keen interest of the opposition is more active involvement in international affairs as well as gaining wider background on the matter.

"Although there are the OSCE observers, but we said to ourselves that, in the end, there are not enough of them to observe the elections in such a big country like Russia. The OSCE observers could have been able to carry minimum revisions," the German politician stated.

Everyone who’s acquainted with scientific research knows that the maximal volume of tests can guarantee a credible result. To ensure wider comprehension, it was important for the AfD to send as many delegates to Russia as possible.
"That's why it's funny that the very newspapers which value a serious and academic approach write that the AfD needed five people because they were too stupid to observe elections with one man."

According to him, the more observers the better, when it comes to helping with verification. It would have been even better if more Bundestag members, who are committed to neutrality, would have come to Russia to observe the election.

"When somebody is accused of something, the allegations should be backed with facts. It was stated that the election in Russia was not transparent, fair or didn’t comply with the OSCE standards. As a doctor and politician, I think it’s important for me to have all the facts to be able to form my opinion."

On this note, he said that Berlin’s political process seems to be an even bigger "farce."

"Our foreign and security policy is no longer tolerable. The time for such people as [Heinrich] Genscher are gone. Times are different now, when politicians only talk a lot.  But this can’t go on like this any further — one should check facts, and then consider if something is right or wrong. "

As soon as we find out if the election was legitimate, we can start talking international relations prospects.

READ MORE: What's Next? Expert Explains What to Expect After Russian Presidential Election

"We live on the same continent and we depend on co-existence. How can we live now considering the recent conflict situation? These are the questions for today. Sometimes it seems like our current foreign policy, our government is not capable of thinking strategically. Or it can, but doesn’t share this insight with anyone. And then the question rises, why doesn’t it tell us about it?" the politician said.

According to him, people have the right to know how Berlin and Moscow see the future of both countries and how multipolar coexistence in a united Europe can look.

"In realpolitik one needs relevant and pragmatic solutions to problems, but as an opposition force we see that the old parties are neither capable of thinking strategically nor generating solutions. Actually, they only live from hand to mouth, or they just do not have the will to work anymore. "

That's why he concluded that the AfD should develop its own picture of the world. If official Berlin has no strategy, the AfD should work out its own position, suggesting tactical and strategic scenarios, as well as solutions for the next ten to fifteen years.

"If any new elections are to take place, in my opinion they will become our success. The way the government is built now will not last forever. We will probably not make the next four years. "

"Let me just speak my own point of view: Mrs. Merkel does not tell us what’s on her mind. But on the whole, it feels like Berlin is happy that Mr. Putin has won the election again, because he is still a reliable partner and will keep his stable policy in the East over the next few years,” said Schlund.

Taking this into the account, the German government should not be afraid of reactions, even though it beats the drum of war and endorses Russophobic propaganda.

"I think, that the federal government knows that dealing with Putin is dealing with a good diplomat as well as a very calm and patient partner," Schlund said.

Unlike other political parties, the AfD sees no problem in acknowledging the choice of the Russian people. And Schlund saw people who came to vote with his own eyes.

"Such things build a multipolar world. We can’t just preach that we would like one or another candidate to win just because he might do things we would like him to do. This doesn’t work. Just take a look at Libya etc. Endless conflicts are booming there."

If one compares the election in Russia and Germany, the same person leads the country in both cases (Merkel and Putin), but there are some differences.

"While Mr. Putin is growing more and more popular among voters, the support for Merkel is falling rapidly, which is the key difference. And voters are the people, who have made it clear that they don’t want her as chancellor anymore."
If Putin has won by such a large majority, which Merkel could only dream of, there is no doubt that Putin was legitimately elected. But, he regrets the AfD has not had an opportunity to form a government, otherwise German-Russian relations would have already improved.

"That's why we are starting with cooperation on the level of civil society: we are going to communicate with business circles, with doctors, heads of children's institutions and schools, with middle management, so to speak. Initial closer contact is possible and it’s going to happen.  Measures which help to establish trust will be installed during this phase, they are to unite, not alienate people. This is how a friendship is born which will eventually multiply.”

However, Schlund told Sputnik that the Germans often have an incorrect image of Russia, saying “Unfortunately many people who haven’t yet been to Russia still fear it. This is a false perception deliberately provoked by Western media. People in Germany often ask me “Mr. Schlund, you are going to Russia again? Aren’t you scared?” I surprise them, laughing and saying that I don’t fear this more than walking alone in German cities at night. The media in Western Europe don’t deliberately let people get their own opinion of modern Russia and its people. But this is totally absurd!"

There are so many opportunities to work on joint projects, conferences, which could bring people together.
The Bundestag member emphasized that Germans and Russians have much in common.

"Our cultures have so much in common. We have lived most of our history together, mutually respecting each other. There have been bad times, which we shouldn’t forget, but they are over and it will not happen again. I am committed to keeping it this way. We will unite people at all levels of society, because you don’t hit your friends; it’s that easy."

Incumbent President Vladimir Putin secured a landslide victory in the March 18 presidential election, winning over 75 percent of the votes. According to Russia's Central Election Commission (CEC), 1,513 foreign observers from 115 countries, as well as experts from various international organizations monitored the voting process.

The views and opinions expressed by Dr. Robby Schlund are those of the speaker and do not necessarily reflect those of Sputnik.