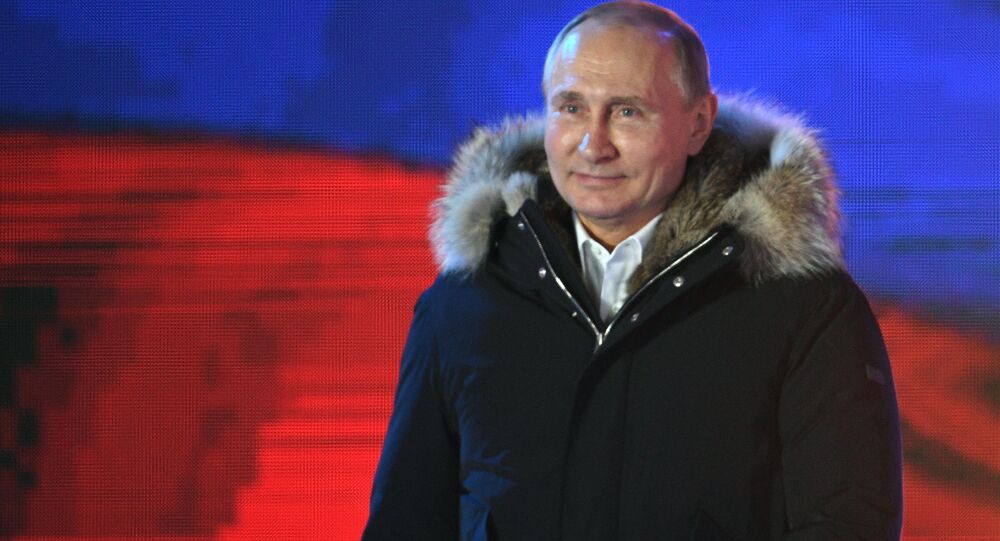 According to the document, 56,430,712 voters supported his candidacy.

© Sputnik / Vladimir Astapkovich
Twitter on Fire As Russian TV Congratulates Putin on Winning 'US Election'
Communist Party candidate Pavel Grudinin is second with 11.77 percent of the vote, while head of the Liberal Democratic Party of Russia Vladimir Zhirinovsky has come in third place with around 5.65 percent of the vote.

Civil Initiative party candidate Ksenia Sobchak is in fourth place with 1.68 percent of the vote.

According to the Russian Central Election Commission (CEC) chairwoman Ella Pamfilova, the turnout at the Russian presidential election stood at 67.54 percent.

"As many as 73,629,581 voters took part in the election, which constitutes 67.54 percent of voters included in lists," Pamfilova said at a commission meeting.

According to Pamfilova, the elections were "free, competitive and transparent."

Each polling place in Russia had an average of five observers present during the March 18 Russian presidential election, with the total observer count this year reaching 356,000 people.

"Speaking about the observers who were present at polling places, their number amounted to 356,000, including 150,000 from civic chambers [deliberative bodies in the Russian federal subjects]. Another 105,000 members from [election] commissions in an advisory capacity and almost 15,000 accredited media workers [also acted as observers]. Therefore, an average of five observers [were present] at every polling place," Pamfilova said.

The Russian Central Election Commission (CEC) is planning to invite all presidential candidates, parties and political scientists to discuss the adjustments to the electoral legislation, chairwoman Ella Pamfilova said Friday.

“After the end of the campaign, we would like to invite all the candidates who participated in the elections, the parties that nominated them, their representatives, independent experts, political scientists and discuss what needs to be done to adjust our legislation so that it fully meets the current demands of society, given that there is already a working group on changing the legislation,” Pamfilova said at the CEC meeting.