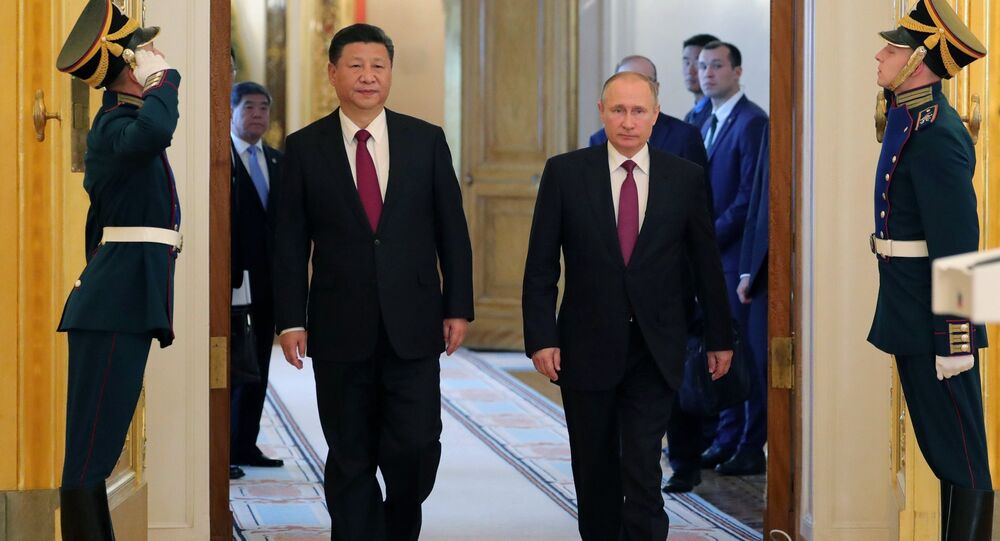 MOSCOW (Sputnik) - The re-election of Russian President Vladimir Putin, as well as the recent re-election of Chinese President Xi Jinping, will help both countries promote the continuity of their respective foreign policies as well as enhancement of bilateral cooperation, Chinese experts told Sputnik.

On Sunday, Russia held its presidential election. According to the latest figures from the Russian Central Election Commission, Putin secured his re-election with over 76 percent of the vote with over 99 percent of votes counted.

Relations between Russia and China will continue to positively develop as the re-elected leaders are expected to promote their existing foreign policy courses, Chinese experts speculated.

"Putin's re-election as president will ensure Moscow's stable course toward China, and the Russian-Chinese relations will develop confidently and positively. Continuity of the leadership will ensure continuity of policy," Sun Changdong, a member of the council of the Russia-China research center of strategic partnership, told Sputnik.

"In the political sphere, the leaders of the two countries have already established constructive relations, Putin is well acquainted with the political system and political culture of China, he has extensive contacts with the Chinese leadership, so his election will contribute to the stable development of the Russian-Chinese relations," Feng said.

According to Feng, Putin's main foreign policy course will not change during the new presidential term, and Russian-Chinese relations in politics, the economy, security and other areas will be strengthened.

Sun said that bilateral economic cooperation would continue developing as well, noting however that the Russian side should continue improving their business climate to attract new investment.

"The governments should try to create even better conditions in this area. I hope that the Russian side will work to improve the business climate, solve emerging problems in order to give more confidence to Chinese investors, especially potential investors. This is the only way to give impetus to the Russian-Chinese economic cooperation and to increase Chinese investment in the Russian economy," Sun said.

© AP Photo / Evan Vucci
Russia a 'Natural Ally' to US Against China, Iran and Turkey – Bannon
Feng speculated that the Russian authorities would now focus on developing the economy and improving people's lives, and that Russia would increase investment in high-tech industries and "adjust its policy accordingly."

"The tendency to enhance the Russia-China cooperation in the high-tech industry and infrastructure will remain in place… This includes the development of the Northern Sea Route, the ports of the Far East," Feng said.

According to the expert, Russia will continue its policy of "turning to the East" and pay more attention to China amid the ongoing deterioration of relations with the West.

Sun also noted that Russia and China should enhance their partnership in the humanitarian sphere, specifically in the fields of culture and sports. He added that China would provide Russia with its full support for the 2018 FIFA World Cup this summer.