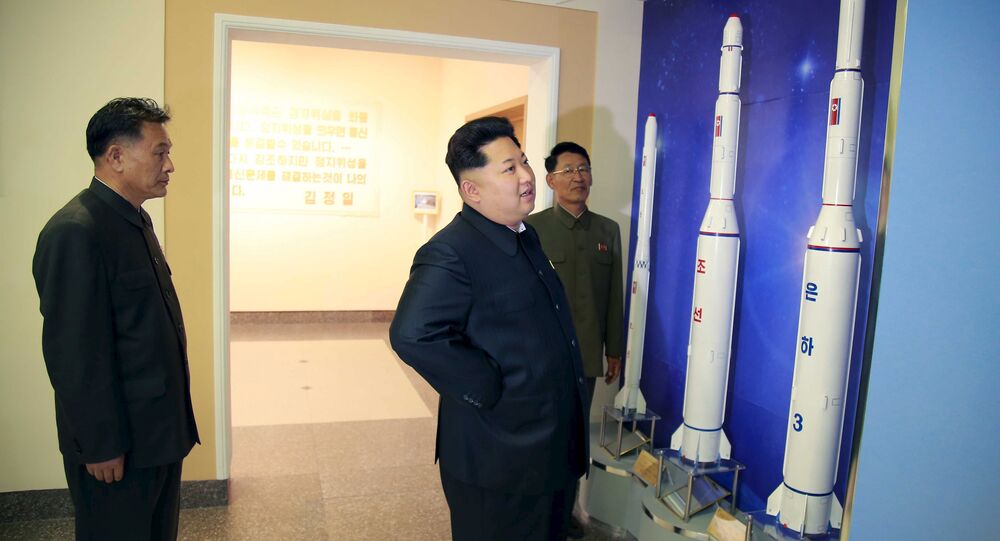 As North Korean leader Kim Jong-un has heightened tensions with an increasing number of long-range ICBM launch-testings, many experts struggle to comprehend Pyongyang’s motives. While more people fear that war is imminent, have we really reached the point of no return? Tom McGregor takes a closer look.

The public-at-large have been asking, "Is North Korean leader Kim Jong-un crazy?" Philippines President Roderigo Duterte had expressed such concerns when speaking on the phone with US President Donald Trump, according to leaked transcripts published by the Washington Post.

Kim Jong-un's actions and words seem to be "begging for war" at the moment, and if he sparks war there's little chance his regime will survive after the US and its allies respond with "fire and fury."

© REUTERS / KCNA
You Can't Look More Epic Than Kim Posing in Front of His Fearful Missile (PHOTOS)
Kim is beginning to alienate nations that have long maintained positive relations with Pyongyang. Beijing announced a few weeks ago that if North Korea invades another country, China will not defend them.

In all likelihood, the United Nations Security Council will reach unanimous agreement with members including China and Russia agreeing to condemn North Korea's actions.

Nevertheless, imposing more sanctions on North Korea, as well as deploying more troops and weapons to South Korea and Japan will not cause Kim to back down. So, what are the next steps: continue negotiations or force an ultimatum on Pyongyang that could lead to war?

For more than five decades, Western powers have agreed to negotiations with North Korea but by looking at the results, little has been accomplished.

Pyongyang appears to utilize the "bluff and bluster" strategy. Create a geo-political crisis and request compromise from opposing forces, assuming they can be rewarded since other nations want to prevent war.

Historically, the method has proven effective, but tempting fate again with Trump in the White House could result in catastrophe for North Korea.

© AP Photo / Mary Altaffer
US Comes to Russia With 'Absurd' Request for More Sanctions Against North Korea
In the book, "Art of the Deal," Trump highlights how bluffing can backfire when the other side stands unwilling to back up its threats with actions. Meanwhile, Trump suggests you should not bluff unless you are willing to lose if other side calls your bluff.

Accordingly, President Trump is well-suited to tackle Kim Jong-un's threatening manner. And it seems, Pyongyang understands its boundaries. They can threaten war, but should not launch missiles that strike territories that are aligned with Washington.

Yet, Kim's continuous development of nuclear warheads should not go unheeded. Eventually, Pyongyang must dismantle its atomic armaments or risk more dire consequences.

Putin is the solution

Yes, we can resolve the North Korean conundrum, but all parties involved should shift tactics for better results. Washington, Seoul and Tokyo are perceived as bitter enemies to Pyongyang does not intend to work with them.

Meanwhile, ties between Beijing and Pyongyang have crumbled, since China had warned North Korea to stop ICBM testing. Chinese officials also lodged a formal complaint to the North Korean Consulate in Beijing as well.

So when resuming six-party talks (China, Japan, North Korea, Russia, South Korea and the US), Putin deserves recognition to serve as the leading mediator for all participants seeking a peaceful resolution.

The Western media would explode in outrage, but let common sense and logic prevail. Putin holds influence within Pyongyang and Beijing circles, while he can continue discussions with Washington, Tokyo and Seoul officials.

Putin has an incentive to support successful conclusion of six-party talks since Western powers will have good reason to dismiss economic sanctions against Russia under a new era of peace — Pax Putin.

Targets to aim for

Six-party talks can only end well if Pyongyang abandons its nuclear weapons. A reasonable compromise would be for either Moscow or Beijing to receive delivery of Pyongyang's entire atomic armaments and allow UN (United Nations) inspectors to witness the full transfer.

© Sputnik / Iliya Pitalev
Russia Doesn't Want a Humanitarian Crisis in North Korea - Minister on Sanctions
Pyongyang may show initial reluctance, believing they risk losing everything in the long-term. But Western powers should sign a deal to declare support for the weapons' transfer and withhold threats to spark regime change in North Korea.

Washington, Seoul and Tokyo should also oppose "pre-emptive strikes" against Pyongyang. So long as North Korea does not launch invasions against rival nations, there's no reason for Western powers to prepare for war against them.

Right now, Pyongyang feels cornered and high-level officials may have concluded that there's no escape route for peace.

Putin as a mediator can play a crucial role to help Pyongyang understand that Russia and China will protect them from pre-emptive strikes or CIA-backed color revolutions in the country.

Meanwhile, the West needs assurances that Kim Jong-un does not hold unfettered access to nuclear bombs that can annihilate Seoul and Tokyo in just a matter of minutes.

The six-party talks can succeed, just as long as all participants seek peace as the end goal. We have not reached the point of no return, but time is running out if compromises from all sides cannot be reached soon.