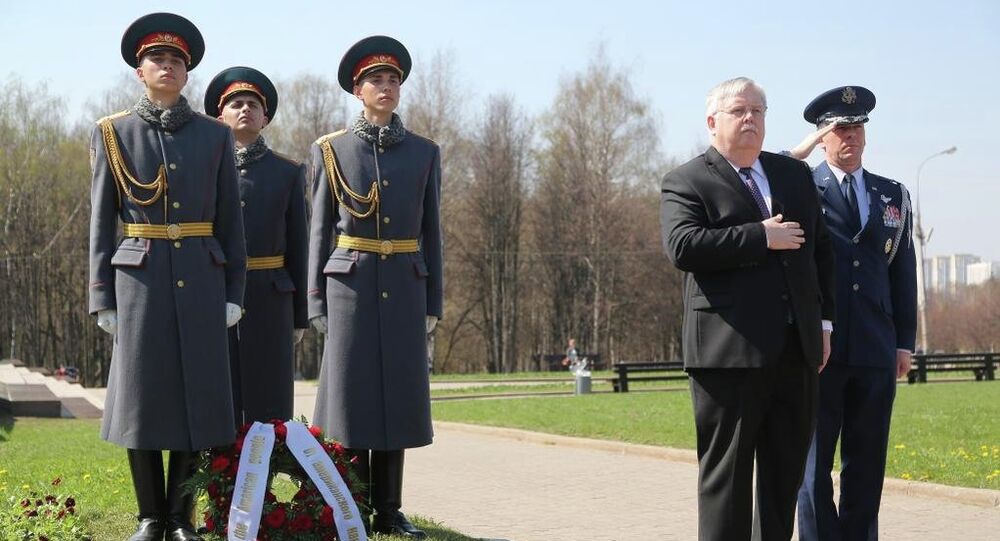 What Ambassador 'Color Revolution Specialist' Tefft Takes With Him by Retiring

Veteran US diplomat John Tefft will step down from his post as Ambassador to Russia in the fall. RIA Novosti contributor Rostislav Ishchenko takes stock of the career diplomat's exploits across the post-Soviet space, and whether his reputation as the State Department's 'color revolutions specialist' is deserved.

This week, the US Embassy in Russia announced Ambassador Tefft's plans to leave his post in the coming months. Deputy Chief of Mission Lynne Tracy said that the ambassador was "completing his mission in Russia" and that he and his wife Mariella would be leaving Moscow "in the beginning of autumn."

Having joined the US Foreign Service in 1972, Tefft's career stretches back 45 years. Over thirty years of that was spent in the Soviet Union, and later, the post-Soviet space, with Tefft serving as the US's top representative in Vilnius, Tbilisi, Kiev and Moscow between 2000 and 2017.

© AFP 2020 / AUDE VANLATHEM / BELGA
In Nuland's Footsteps: US Names Ex-McCain Staffer as Special Ukraine Envoy
Taking stock of Tefft's career amid the news of his impending retirement, Ukrainian-Russian journalist Rostislav Ishchenko wrote that the diplomat has "quite unfairly been called a 'specialist in color revolutions'."

"A more suitable title for him," according to the observer, "would be 'crisis manager' – someone who is sent on firefighting missions" to strategically important areas in the post-Soviet space where the US is facing difficulties maintaining control.

Tefft's Russia appointment is likely to be his pre-retirement 'swan song', Ishchenko noted, given his age (68), and the fact that there is little room for upward advancement for him in the diplomatic corps. If he doesn't retire, he may find a position in the State Department where he can pass on his experience to younger generations of US diplomats.

And Tefft has experience to pass on, according to the journalist. In spite of his reputation as a specialist in the organization of color revolutions, "in practice, he did not conduct a single operation of this kind. Meanwhile, his career has seen both brilliant successes, and blatant failures."

© Sputnik / Michael Klimentyev
The Meeting the World Waited For: What did Putin and Trump Manage to Agree Upon?
"Let's start with the successes. Tefft was appointed US Ambassador to Lithuania in 2000, at a moment when radical pro-EU integration forces lost parliamentary elections to moderate pro-EU integration forces…A danger emerged that the pace of Lithuania's integration into Euro-Atlantic structures (including the EU and NATO) would slow down, and fall out of the general trend among the Baltic states. Tefft completed his work in Lithuania in May 2003. The same year, a referendum on EU membership saw 60% of the country voting to join the EU." The country completed entry into the supranational union and the NATO alliance the next year. "John Tefft brilliantly coped with the task assigned to him."

Tefft's next mission went less smoothly, Ishchenko recalled, although not due to any particular fault on the diplomat's part. "In 2005, he was appointed as US Ambassador to Georgia, where in January 2004, following the victory of the so-called 'Rose Revolution', the moderately Russophobic Eduard Shevardnadze was replaced by the radically anti-Russian Mikheil Saakashvili."

"Tefft's mission was to stabilize and strengthen the new regime, which wasn't easy given, Saakashvil's character, his intolerance for political rivals (even from his own camp) and his ambitions for autocratic rule. Today, Saakashvili is giving headaches to Petro Poroshenko in Kiev, even though he is only in Ukraine on a sufferance. One can imagine how difficult it was to work with the Georgian politician. After all, in Tbilisi, he was the leader and hero of the 'revolution'."

© Photo : BBC screenshot
Saakashvili chewing his tie as he waited for a BBC interview.

"Nonetheless," the observer noted, "under Tefft's patronage, a fairly stable, internally steady, anti-Russian regime was established. One can only wonder how long it would have lasted, were it not for the August 2008 war, in which Georgia suffered a crushing defeat, after which Saakashvili's standing crumbled."

Georgia's aggression against the Abkhazian and South Ossetian breakaways, Ishchenko recalled, was a consequence of the gung-ho mentality in the Bush White House and the State Department, with Secretary of State Condoleezza Rice and other officials hinting to Tbilisi that they would support Georgia 'no matter what'.

"Saakashvili decided that the US and NATO would support him by military force at the critical moment, and launched his campaign of aggression. Tefft was left to clean up the mess. Notwithstanding Saakashvili's critically weak position in Tbilisi after Georgia's military defeat, he managed to stabilize the regime once again. Tefft left Georgia in 2009, and Saakashvili managed to stay in the presidential seat through his entire second term, until late November 2013," after which he fled the country in disgrace on corruption and embezzlement charges.

Ukraine on the Eve of Orange Revolution 2.0

In 2009, Tefft began the next chapter of his career, being appointed Ambassador to Ukraine – a post he would hold until August 2013.

© REUTERS / KCNA
China and South Korea Urge Diplomacy as US Leaders Hint at Military Action
Again, Tefft came into a difficult situation, Ishchenko noted. "Viktor Yushchenko and Yulia Tymoshenko, who came to power following the first Orange Revolution [in 2004] had lost the confidence of the Ukrainian public, and were set up to lose the upcoming presidential elections in early 2010 to Viktor Yanukovych. The danger of a sharp reorientation of Kiev toward Moscow was strong. Indeed, in the first half of 2010, Russian-Ukrainian relations experienced a 'honeymoon' period which reached its peak in April with the signing of the Kharkiv Accords" (under which the Russian lease on Crimean naval facilities was extended until 2042).
© Sputnik / Grigoriy Vasilenko
US Ambassador to Ukraine John F. Tefft at the presentation of a new design of one hundred dollar bill in Kiev

"Tefft managed to gradually return Kiev to a policy of 'European integration' and confrontation with Russia…At the same time, it's worth noting that although pressure aimed at Yanukovych with the aid of 'color revolution technologies' was starting to take shape, it was meant to take place during the presidential elections set for 2015, or one and a half years after Kiev was to sign it association agreement with the EU."

In other words, the Maidan protests which began in late 2013, culminating in the February 2014 coup, "although built on Tefft's work, were initiated by others, who failed to employ Tefft's soft touch approach to bringing Yanukovych to total and unconditional surrender before the West."

Finally, in August 2014, at the height of the crisis in Russian-US relations amid the events in Ukraine, Tefft was appointed ambassador to Russia. "Here," Ishchenko noted, "he received a disjointed and marginalized pro-American opposition, demoralized by the defeat of the White Ribbon movement" two years earlier.

© AP Photo / APTV
'Divide and Rule': Why Washington Won't Leave Syria
"Tefft was able to assemble and reorganize its remnants. Notwithstanding the fact that the pro-American opposition never managed to become a serious political force, it did succeed in taking a disproportionally large place in the Russian information space, thanks to Tefft's efforts. Its ideological potential was diversified, moving from a strictly liberal doctrine to positioning itself as patriotic or even a nationalistic force."

Generally speaking, Ishchenko noted, "when Tefft leaves his post in the fall, he will leave his successors a workable mechanism for influencing the internal political situation in Russia. Whether and how the next ambassador uses this mechanism will no longer be Tefft's problem."

In other words, the journalist wrote, "we can say that this person, who has a reputation as an organizer of coups, is in fact an organizer of pro-American political forces. He knows how to collect them into a single force, and to find them a political strategy commensurate with the situation."

"With Tefft's departure, America will lose a strong, assertive, but cautious diplomat in Russia. However, Tefft has been lucky. He's departing at the very beginning of the end of the era of US hegemony, not as a victor, but not as a defeated figure, either. It's obvious that the new era – the era of global multipolarity, will require new diplomats. Will they be as professional as John Tefft? We will see," Ishchenko concluded.

No Ifs and Buts? What's Behind WH's Reported Change of Heart Towards Assad