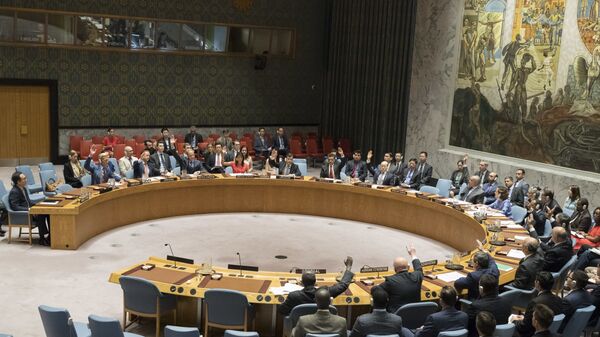 Given the US approach to its relations with Russia, it is "absurd" for Washington to expect Moscow's support for its sanctions plan for North Korea, Georgiy Toloraya of the Russian Academy of Sciences told Sputnik.

On Monday, the UN Security Council is to vote on a US-drafted resolution that would strengthen sanctions against North Korea in the aftermath of a reported sixth nuclear test.

The original version of the text called for a trade embargo on oil and textiles and a financial and travel ban for leader Kim Jong-un. China and Russia oppose sanctions that could lead to a humanitarian catastrophe in the country, which was already put under more sanctions in August. With that in view, the US has watered down the text in order to win the approval of the Security Council, although it still proposes a ban on North Korean textiles.

Premonition of War: Japan Backs US Plan to Curb N Korea's Oil Imports
Georgiy Toloraya, Director of the Center for Russian Strategy in Asia at the Russian Academy of Sciences' Institute of Economics, told Sputnik that the US position, which expects Russia to support sanctions against North Korea while at the same time sanctioning Russia, is "absurd."

"The Americans want to deprive the North Koreans of heat, to expel all their guest workers who are needed by Russia in the Far East, and also to stop the export of textiles from the DPRK. What does that have to do with the nuclear missile program?" Toloraya asked.

"In addition, the Russian president said correctly that it is quite absurd to include Russia along with the DPRK on the sanctions list, and then ask us to take joint actions on sanctions. Moreover, we consider this unnecessary because sanctions simply don't work."

In July, the US Congress approved a sanctions bill targeting Russia, Iran and North Korea. Speaking at the BRICS conference last week, Russian President Vladimir Putin said, "It's ridiculous to put us on the same sanctions list as North Korea and then ask for our help in imposing sanctions on North Korea." 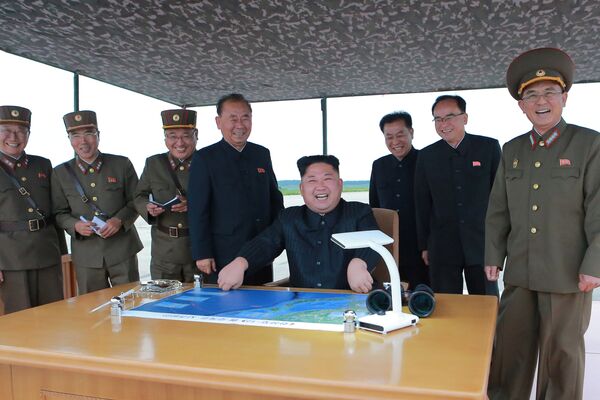 North Korean leader Kim Jong Un inspects a long and medium-range ballistic rocket launch drill in this undated photo released by North Korea's Korean Central News Agency (KCNA) in Pyongyang on August 30, 2017
© REUTERS / KCNA
Zhou Yongsheng of the Center for International Relations Studies at the Diplomatic Academy told Sputnik China that as far as sanctions are concerned, it's either all or nothing.

"I think that if we really apply a full package of sanctions to the DPRK, then this will also help solve the nuclear problem. Since right now the supply of energy resources and grain to the DPRK has not been completely stopped, this means that the DPRK has the means for a confrontation with the international community. In the event that some kind of supply to the DPRK is interrupted completely, then the country won't last too long and it is very possible that it will make some concessions," Zhou declared.

Pyongyang Threatens US With 'Greatest Pain' If UNSC Adopts Sanctions Resolution
At a meeting with South Korean President Moon Jae-in on the sidelines of the Eastern Economic Forum in Vladivostok on Wednesday, Putin remarked on the importance of deescalating the tense situation in the Korean peninsula.

"There is no point in giving in to emotions and driving North Korea into a corner. Now, more than ever, everybody needs to stay calm and avoid steps that lead to an escalation of tension," Putin said.

Moon Jae-in and Putin signed a host of deals to boost bilateral cooperation in the areas of joint financial and investment platforms, healthcare and IT. Putin also reiterated Russia's readiness to develop trilateral projects in the Far East with both North and South Korea, which would open the country up economically and politically.

"Development of the Far East will not only contribute to the prosperity of the two states but also to changes in North Korea, which will become a basis for trilateral relations," the South Korean president said.