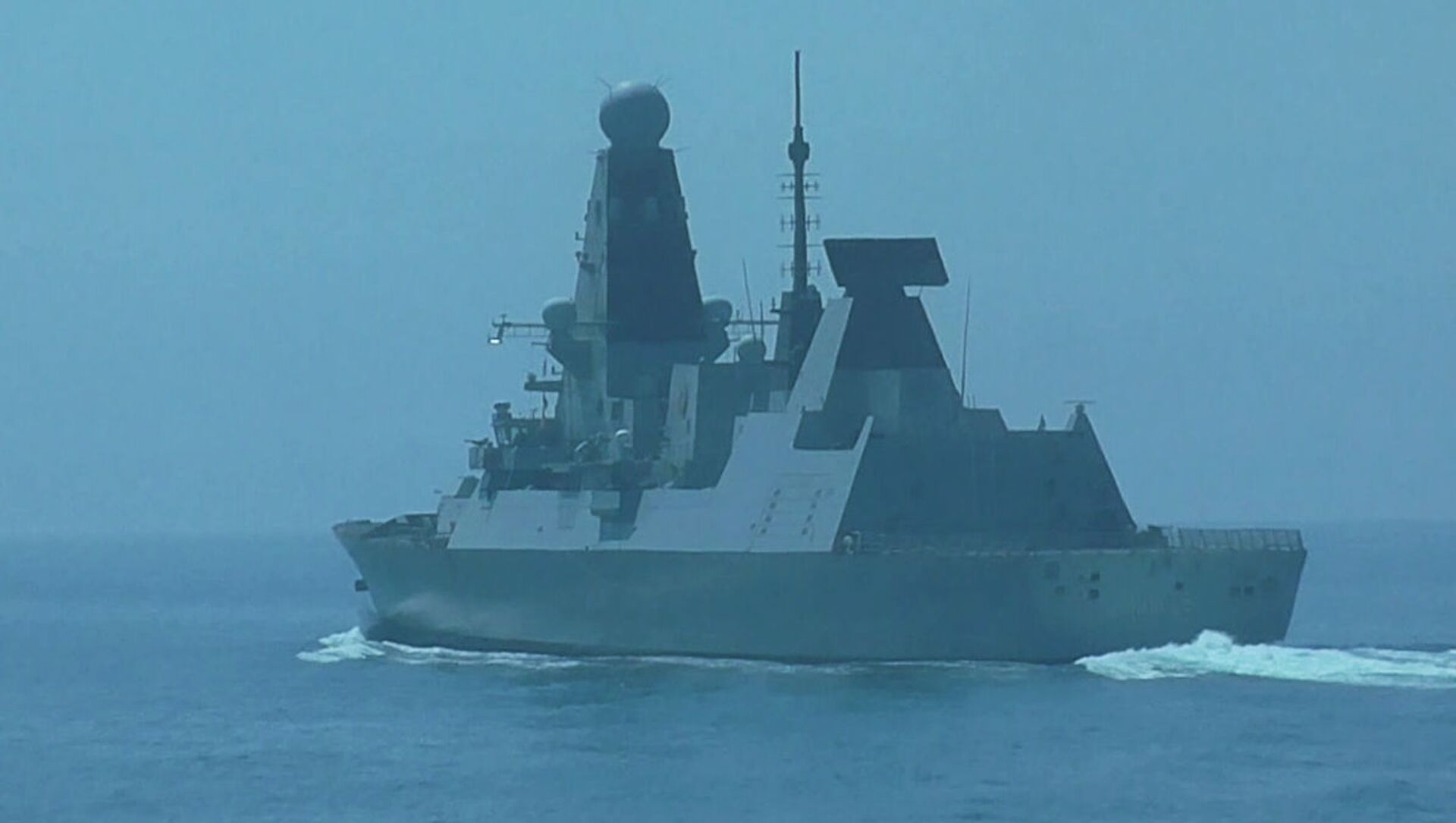 Svetlana Ekimenko
All materialsWrite to the author
The Russian Ministry of Defence stated on Wednesday that the UK destroyer HMS Defender had entered its territorial waters off the coast of Crimea in the Black Sea deliberately as a provocation, with a Russian border patrol vessel firing warning shots at the warship, as the British side repeatedly made contradictory statements about the incident.

Pentagon Press Secretary John Kirby weighed in on the recent incident with the British destroyer HMS Defender and a Russian patrol ship in the Black Sea near Crimea, as he gave a press briefing on 24 June.

Kirby was asked about the events that saw the Russian vessel fire warning shots at HMS Defender, which violated the state border of the Russian Federation, entering three kilometres into its territorial waters, near Cape Fiolent, in the northwestern part of the Black Sea.

The retired Unites States Navy rear admiral, who currently serves as Assistant to the Secretary of Defense for Public Affairs, responded by saying:

“Well, I would ask you to go back and look at what the British Ministry of Defence said yesterday. I think they, and this is really for them to speak to, but they were very public about the fact that there was no shots fired as warning to HMS Defender. That it was simply Russian disinformation, as yet another example of the Russians trying to spin events to suit their own narrative. It just didn't happen.”

The Russian Embassy to the United States was swift to slam the “disinformation” accusations lobbed against Russia by Kirby as “groundless”.

The embassy wrote on its Twitter page that the US was “denying the obvious” harbouring “illusions” regarding the actual situation in Crimea.

🔻
1⃣ @PentagonPresSec John Kirby's accusations against #Russia in disinformation on the incident with HMS Defender (a.k.a. Aggressor) are groundless. What happened was recorded and published by FSB RF:
🔻https://t.co/tAqGlgiazL pic.twitter.com/550rJlXxob

2⃣ Denying the obvious, #Pentagon still lives under illusions on the actual situation in 🇷🇺 Crimea and around the Peninsula.

Amid contradictory statements from the sides involved in the incident, as the British military claimed its warship the HMS Defender had conducted an entirely peaceful passage and denied warning shots were fired at it from a Russian patrol vessel, Russia's Russian Federal Security Service (FSB) has released a full-length video.

Footage showed Russian coast guard boats warning the HMS Defender that they will open fire if the British destroyer does not leave Russian territorial waters around Crimea.

The Russian government has characterised the incident as a clear provocation, with the Russian Foreign Ministry telling the United Kingdom that if similar actions take place again, the "possible consequences" would "rest entirely" on the British side.

During a visit to a military camp in the English town of Aldershot on Thursday, UK Prime Minister Boris Johnson claimed it was entirely right for the British warship to be sailing in the Black Sea off Crimea.

He emphasised that the UK government does not recognise Crimea's reunification with Russia and, therefore, rejects Russia's claim to those waters.

"These are a matter for the MoD [Ministry of Defence], but if you want my view I think it was wholly appropriate to use international waters. And by the way, the important point is that we don’t recognise the Russian annexation of Crimea, this is part of a sovereign Ukrainian territory," said Johnson.

Moscow has pointed out that the Crimean peninsula hasn't been a part of Ukraine since 2014, when a US- and EU-backed coup ousted the country's democratically-elected president and prompted the peninsula's residents to hold a referendum to reject Kiev's jurisdiction and rejoin Russia. The UK, US, and their allies have refused to recognise this state of affairs.

No warning shots have been fired at HMS Defender.

Russian foreign and defence ministries summoned British diplomatic officials in Moscow on Wednesday in connection with the British destroyer's breach of Russia's maritime borders in Crimea.

Moscow has informed Britain's ambassador in Russia that the "possible consequences" of a repeat of a "provocation" like Wednesday's incident would "rest entirely on the UK side."

Russia says the British warship had sailed as far as 3 kilometres (2 miles) into Russian waters near the southernmost tip of Sevastopol, a Russian naval base. 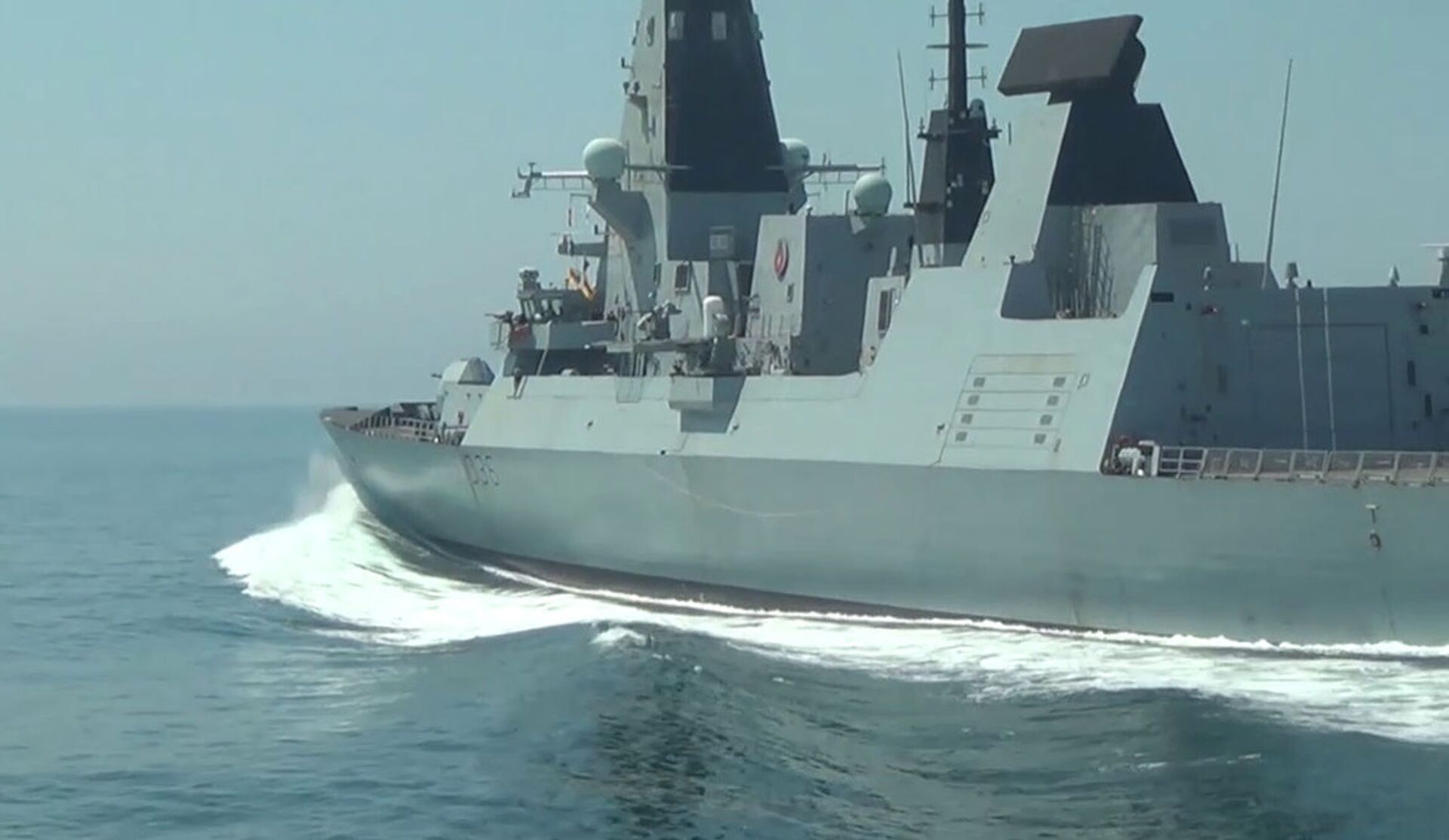 The violation of maritime borders, which the Russian side regards as “gross non-compliance with the 1982 United Nations Convention on the Law of the Sea," prompted gunboats to fire warning shots at the warship that the UK Ministry of Defence dismissed as part of an “exercise”.

The Russian Defence Ministry said it scrambled a Su-24M attack aircraft that dropped four bombs in the path of the British destroyer, passing roughly 15 km off the Russian Black Sea Fleet's home base in Sevastopol. In the end, the British warship signalled its readiness to change course back into international waters.